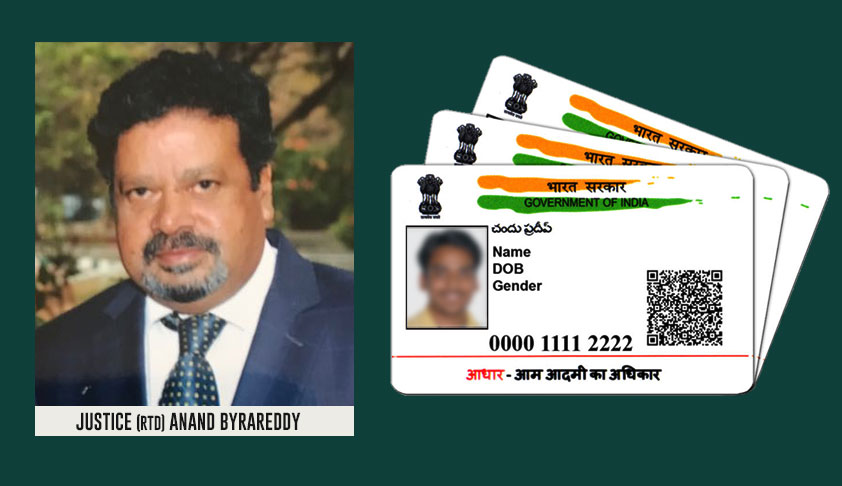 Justice Byrareddy begins by highlighting the fact that the Act does not distinguish between citizens and non-citizens, alleging that this leaves the system open to abuse and poses "serious security threat".

To this end, he contends, "It is most respectfully submitted that the Aadhaar Act and the scheme of the entire mechanism set up under that statute shakes the very legitimacy of the political unit of the welfare state of India, inasmuch as the same fails to account for and be responsible for the welfare of this country’s citizenry. It is not a trifling matter that the Aadhaar Act fails to distinguish between a citizen and a resident/migrant/immigrant (legal and illegal). It is humbly submitted that under the Aadhaar Act, the qualifying criteria for enrolment is that of residence in India for the stipulated period of one hundred eighty two (182) days in the twelve months preceding the date of application for enrolment vide Section 2(v) read with Section 3 thereof...

...Therefore, given the state of the Indian economics, it is trite that without remedying the lot of its citizenry if a statutory measure seeks to impart benefits in the form of subsidies and other targeted financial aids to non-citizens the same is blatantly arbitrary and demonstrates an utter non-application of mind."

The Application then goes on to allege that the Act violates the Fundamental Right of privacy of citizens, as guaranteed under Article 21 of the Constitution of India, "since biometric and demographic information is collected under the Scheme as a mandatory condition precedent, while the safeguard mechanisms provided are wholly inadequate, either in practice or in a statutory framework to ensure the security of such sensitive data".

This differentiation, it says, is also violative of Article 14 of the Constitution of India, explaining, "...the Aadhaar Act insofar as it is mandated under Section 4(3) thereof shall be the ‘proof of identity for any purpose’ and therefore treats different classes of individuals equally. This is crucial to note since most of the State benefits, for effective disbursement whereof the scheme is sought to be introduced, accrue to the citizens alone and therefore a scheme encompassing all ‘residents’ is patently arbitrary and against the very professed objective for which the statute is sought to be enacted...

...Furthermore, the Aadhaar Act, is violative of Article 14 of the Constitution insofar as it seeks to create a wrongful classification amongst a homogeneous group of entitled persons – (i) the ones with an Aadhaar number; and (ii) the ones without an Aadhaar number, the same is arbitrary. It is to be noted that this artificial classification also has no rational nexus to the objects of the constitutional and statutory obligations contained in the Directive Principles of the State Policy, fundamental rights chapter and statutes and programmes with respect to financial subsidies, benefits and services. Therefore, the Aadhaar Act cannot survive constitutional muster of Article 14 and is liable to be struck down in its entirety."

It further points out that although the Unique Identification Authority of India (UIDAI) is in possession of the data, it has no legal liability for any theft, fraud, crime and compromise of any security or privacy. Besides, the fact that it has been made compulsory has also been impugned, pointing out that the scheme deprives people of services if they do not link them to Aadhaar.

The Application, thereafter, contends that the passing of the Aadhaar Bill as a Money Bill "amounts to a fraud on the Constitution of India", and demands, "In light of the above, it is of crucial importance that this Hon’ble Court declares the Aadhaar Act to be unconstitutional on the aforestated grounds for being deeply invasive of the fundamental right of personal privacy and for the infirmities as more fully elaborated above. Consequently, the further notifications published by the Respondents are also required to be adjudicated and declared as unconstitutional for falling foul of constitutional protections guaranteed to the citizens of this country, including the Applicant herein.

The menace of the Aadhaar architecture, which imperils the cherished fundamental rights of the citizenry can only be adequately protected if status quo ante is restored, i.e., the collected data of the citizens under either the Aadhaar/UID policy prior to the enactment of the statute or under the patently unconstitutional Aadhaar Act, are destroyed leaving no scope for any continuing imperilment of the rights, liberty and life of the people of this country including the Applicant."