Gopal Subramaniam and RF Nariman to be Judges of Supreme Court of India. GS Likely to be CJI in 2022 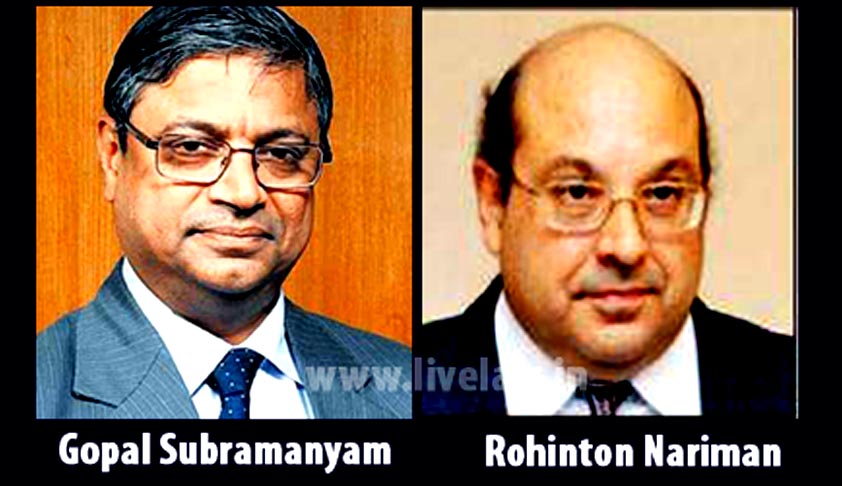 It is learned that first collegium  led by Chief Justice RM Lodha has recommended names of Gopal Subramaniam and RF Nariman as Judges of Supreme Court. Both of them are most prominent lawyers in the Supreme Court and their possible elevation was being discussed by the  members of Supreme Court Bar for a while.

The first  person to be appointed as a Judge from the Bar was Justice S.M. Sikri in 1963. Justice N Santosh Hegde  and Justice Kuldip Singh, who  were busy  practicing lawyers in Supreme Court, were the other two appointees, directly as judges of the Court.

58 year old Nariman is a scholar and well versed in religious studies. Though short tempered , he is very sincere to the brief and a committed lawyer. He started his career with a formidable background as son of Fali Nariman, but within a few years, he established himself, finding own  space in legal world. He is considered to be a very expensive lawyer who charges 7.5  lakh to 11 lakhs per hearing. He has served as Solicitor General of India for a brief period.

56 year old Subramaniam  is known for his mild manners. The Court has reposed faith in him by appointing in many cases as Amicus Curiae.  He is equally expensive Supreme Court Senior Advocate. who charges more than 5 lakh per appearance.

Subramaniam was an Additional Solicitor General from 2005 to 2009 and later Solicitor General upto 2011. He was also chairman of Bar Council of India for 2010-11. Since will have a nine year tenure as Judge of the Supreme Court, he is most likely to be Chief Justice after retirement of Justice N.V. Ramana   who retires on 26.8.2022 .

The Collegium has also recommended appointment of chief justices of Calcutta and Orissa high courts, Justice Arun Mishra and Justice Adarsh Kumar Goel as judges of the Supreme Court.

Justice Goel, 60 was a practicing lawyer in the Supreme Court before his elevation as Judge of Punjab and Haryana High Court. He became its acting Chief Justice in May 2011,  and later  transferred to the Gauhati High Court and made its Chief Justice in December 2011. He was shifted to the Orissa High Court in October 2013.