Hashimpura : How The Brave Efforts Of A Photo Journalist Provided Clinching Evidence In The Case. 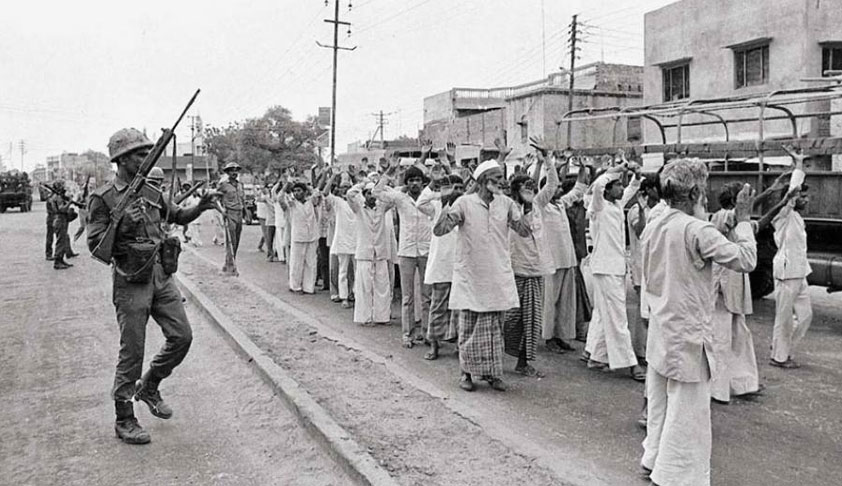 Hashimpura evokes the horrors of the Holocaust.Imagine being forcibly taken away by armed forces at gun point from the comforts of your home, from the sight of your loved ones, to be packed into a truck with several others and to be taken away to a distant place and shot down in darkness and thrown into a canal- all because one belonged to a particular community.During May 1987, Meerut...

Hashimpura evokes the horrors of the Holocaust.

Imagine being forcibly taken away by armed forces at gun point from the comforts of your home, from the sight of your loved ones, to be packed into a truck with several others and to be taken away to a distant place and shot down in darkness and thrown into a canal- all because one belonged to a particular community.

During May 1987, Meerut and surrounding areas were engulfed in communal riots triggered by the opening of the locks of Babri Masjid to allow entry of worship of idols placed inside the structure. In the wake of riots, on 22nd May 1987, around 42 to 45 men, old and young, all Muslim, from Hashimpura, a mohalla near Meerut, were rounded up by the Provincial Armed Constabulary (PAC) of UP Police, packed into a truck and taken away. They were among more than 600 people who were caught and handed over to PAC by the Army after the brother of an army officer got killed in communal clashes and two rifles were stolen from a PAC van. After letting off most of them, about 45 persons were taken off in a PAC truck.  Each of them was shot by the PAC personnel with 0.303 rifles in cold blood and the bodies were thrown to a watery grave - some in the Gang nahar (canal) and the remaining in the Hindon river. Five of them survived to recount the horrific tale. Of the 38 that were killed, the dead bodies of just 11 of them were able to be identified later by their relatives. The remaining bodies were not recovered.

The criminal justice system meandered for 31 years before it caught up with the guilty, as per judgment of Delhi HC yesterday, whereby the trial court’s acquittal was reversed to sentence 16 cops to life imprisonment( three accused died during the trial). The trial court acquitted the accused in 2015 on the ground that identity of the accused  could not be established. There were systemic attempts to derail the course of justice and shield the accused. The lapses in investigation and prosecution, whether by design or default, were glaring. The General Diary Registers of PAC and the Truck Running Register, which would have shown the names of the officials who were on PAC duty in the truck on the fateful day in Hashimpura, were withheld by the prosecution from the Court until 2018. They were produced only as additional evidence, that too after a crucial intervention made by the NHRC at the appellate stage. The additional evidence of GD Diary extracts contained the list of PAC personnel and their weapons and the number of the truck on which they left for Hashipura on the fateful day  and thus provided the missing link which connected the accused with the crime.

“This is a case where it has been actively attempted to destroy the evidence by the police themselves. In any event, they appear to have actively played a role in this destruction as can be inferred by the obvious lapses in the investigation, particularly the failure to seize the truck on the very first day, thereby allowing the accused to wash it clean of the evidence including chemical residue, blood, bloodstains etc”, observed judgment authored by Justice Muralidhar of Delhi High Court.

What acted as a crucial counter-weight to the systemic attempts to efface evidence was the efforts of a press photographer, Praveen Jain. He was working for Sunday Mail then and was present at the spot.

Photographs of persons being rounded up and the group being taken to the truck came on record, due to the efforts of Jain . The photographs exhibited by him, which were marked as evidence in trial, corroborated the testimonies of the surviving witnesses. Some of these photographs were shown to the survivors, who identified the persons known to them from the said photographs. His photographs also showed the presence of PAC officials with rifles. The High Court noted that his photographs corroborated the facts revealed by witnesses and GD extracts.

Senior Advocate Rebecca Mammen John, who appeared for the appellant-victim in the High Court, commended the efforts of Praveen Jain in Facebook by stating :

"Sometimes, the most innocuous piece of evidence , captures the horror of the moment . Praveen Jain , the iconic photographs you took while hiding behind bushes ,on 21 st May 1987, , showed the men of Hashimpura being taken away by the PAC . These photographs were part of the court record. Praveen Jain appeared as a witness in the trial and even produced negatives of all the photographs taken . The surviving eyewitness used these photographs to identify the other victims of the crime Thank you sir ."

Recounting his experience, Praveen Jain said that he visited Hashimpura on getting news of communal clashes and Army search there. “The moment I entered the mohalla, the tension was noticeable. Army men were marching in groups. Young men were being dragged out of their homes. I took my Canon in my hands and started clicking photos. What was very disturbing was the sight of the distraught women. Standing on their terraces, they were shouting at the Army men, pleading with them to leave their men alone.” he said.

As the operations got more intense, things got risky for him as well.  He had to hide inside a Muslim family’s house.  “It was mostly the young men who were dragged out. And while conducting the search, Army men were beating them up with their fists and rifle butts. As I was trying to capture one of these pictures, one of the Army personnel saw me and tried to stop me. He asked me to leave. As far as I can remember, I was stopped twice but I did click my pictures, hiding at different places at different times.”, he said.

Jain's efforts prove that photography is not just about freezing a moment with an instrument; but about depicting reality with a human touch so as to enable one to have a peek into the past and a gaze into the future. The poignancy of Hashimpura photographs is that they do not belong merely to a distant past, but could relate to the recurring present of New India.