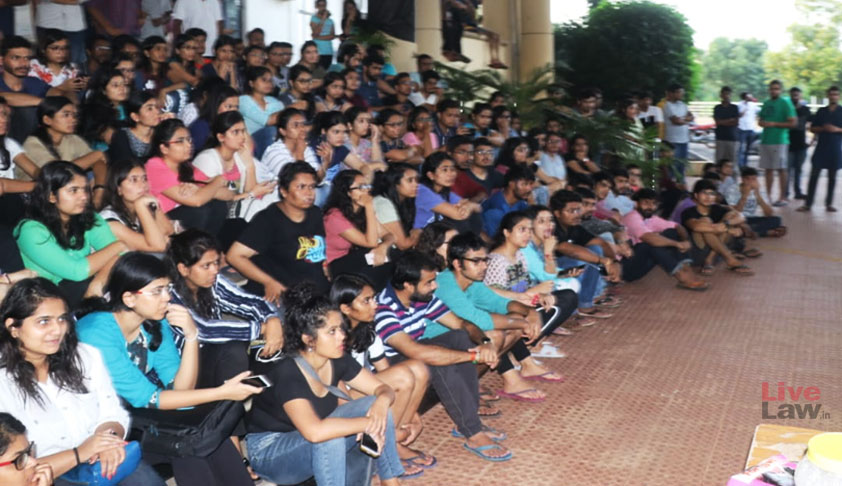 The Chhattisgarh High Court, on 27 August, in Dr. Avinash Samal v. State of Chhattisgarh, quashed the extension of tenure of Hidayatullah National Law University (HNLU), Raipur Vice-Chancellor (VC), Prof. (Dr) Sukhpal Singh. Scores of students had then camped overnight on campus in the open from 10:30 pm the same day, demanding that the judgment be “respected” and that Dr. Singh should...

The Chhattisgarh High Court, on 27 August, in Dr. Avinash Samal v. State of Chhattisgarh, quashed the extension of tenure of Hidayatullah National Law University (HNLU), Raipur Vice-Chancellor (VC), Prof. (Dr) Sukhpal Singh. Scores of students had then camped overnight on campus in the open from 10:30 pm the same day, demanding that the judgment be “respected” and that Dr. Singh should not be allowed to continue as the VC.

It was only on the 3rd day of the protest that the Chancellor of the University appointed Mr. Ravi Shankar Sharma, the Principal Secretary, Government of Chhattisgarh, via notification as the interim Vice-Chancellor of the University. Students rejoiced at the appointment and resumed discussions with the administration, placing a list of demands for enhanced transparency in the administration of the college. Their joy was, however, short-lived.

His reinstatement was followed by a general student body meeting, where Dr. Singh was confronted with several tough questions by the students. The issues placed before him included questions on sexual harassment complaints not being addressed through a formal procedure, absence of financial reports, academic rules and arbitrarily functioning administration, frozen moot funding, no practical action in order to set up research centres that exist on-paper, absence of women cell, and prevalence of “despotic faculty appointment”.

During this meeting, a differently-abled student also raised her voice against the difficulties she had been facing for over two years because of lack of support from administration. Her demands for basic necessities on account of being visually challenged, she said, have time and again been ignored and not paid any heed to.

Dissatisfied with Dr. Singh’s response to their grievances, more than 800 students of the college then signed a letter of no-confidence against him, owing to his “style of arbitrary and discriminatory decision making”. The letter goes on to highlight several allegations of inter alia financial irregularity, inaction on allegations of sexual harassment, lack of transparency, arbitrary hiring and firing of faculty, and maladministration.

The letter further acknowledges the pending Supreme Court proceedings but asserts that his “incompetence” should be sufficient ground to ask him to vacate the office, stating,

“While the legality of his tenure is discussed in the Supreme Court of India, we believe that his incompetence is sufficient ground for him to vacate Office of the Vice Chancellor. Our lived experience show how several of us have been victims of his administration’s blatant casteism and continued inaction against sexual harassment.

The hallmarks of Dr. Singh’s tenure have been the stagnation and regression of the academic culture, evasiveness and shirking of responsibility, destruction of all meaningful engagement with stakeholders and the deliberate suppression of their voices. His indifference towards the institution has led to a breakdown of trust between the students and the administration.”

Students have since received support on the no-confidence letter from several faculty members, non-teaching staff members as well as class IV employees. Besides continuing with their peaceful protests outside hostels, they also organised a flashlight march towards the VC bungalow in the campus.

On Wednesday, the students discussed their grievances with their mess contractor, Mr. Gursimran Rajpal as well. An official statement explained, “Some members of the student body had raided the mess and found various unhygienic practices going on, ranging from cockroaches in ration to open sewages. He gave vague excuses for such activities. The mess contract has 46 provisions out of which most were being violated. One of the major issues was that the contract provides for reimbursement to students who are not in hostel for more than 4 days. Mr. Rajpal refused to compensate for the said reimbursement. Issues such as arbitrary limitations on quantity of food were also raised for which Mr. Rajpal refused to take any action in future.”

Additionally, the representatives of the Student Bar Association have now managed to schedule a meeting with the Chief Justice of Chhattisgarh High Court, Justice Ajay Kumar Tripathi, who is the Chancellor of the University. This is in view of the fact that Dr. Singh has been rejecting the students’ demand for his resignation on the ground that it was the Chancellor who had appointed him and hence, it is only him who can ask him to vacate the office.

“The students are hopeful that the Chancellor will understand the problems we have been facing under the draconian rule of Dr. Sukhpal Singh and agree to support us,” a student told LiveLaw.