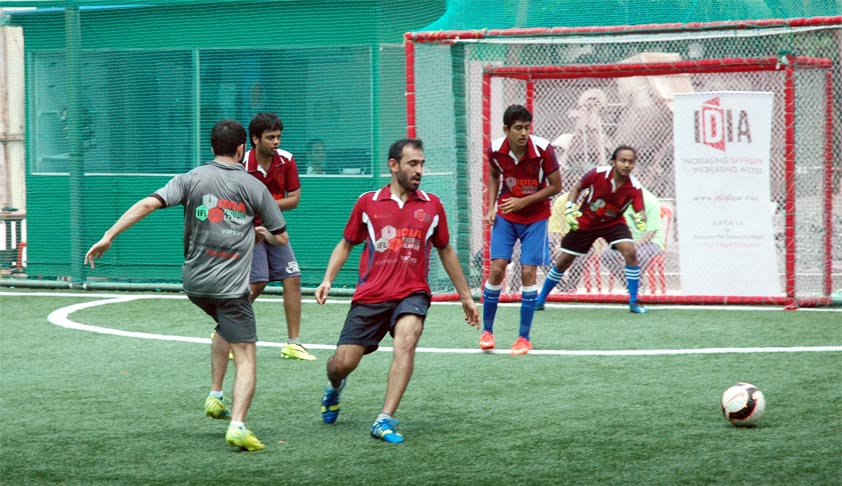 The IDIA Football League 2014 (IFL), an event organized by Increasing Diversity by Increasing Access (IDIA) to raise funds to support the legal education of underprivileged children studying at leading law schools across India came to a fantastic end on September 7.

Powered by Vahura, legal talent specialists, and co-organised by the Times Foundation with and Legal league Consulting as prize sponsors, IFL 2014 was a grand success.

IDIA Scholar Conference, co-organised by the Times Foundation preceded the sporting action. Interactive sessions for IDIA scholars were conducted at the Times of India’s office in Mumbai and various career options were also discussed by Mr. Antony Alex, CEO, Rainmaker and Ms. Tanisha Deshpande from Vahura.

The football action started with league matches on the first day, the results of which deciced the draw of the knockout stage. The IFL Championship Final was a nail biter as it went to penalties. Two equally good teams, Bharucha and JSA ‘A’ figured in the finals and it was Bharucha who kept their calm and claimed the championship.

The finals of the IFL Plate were equally entertaining and Trilegal claimed the trophy after defeating Wadia Ghandy & Co. in the finals. Mr. Labendu Das of AMSS finished off as the Highest Goal-Scorer and Mr. Narayan Kedia of JSA ‘A’ was adjudged to be the Best Goalkeeper of the tournament.

The IFL 2014 came to an end with an award ceremony and a fundraising evening, IFL Night. The event was hosted by Ms. Madhurima Mukherjee, Chief Mentor at IDIA and a Partner at AZB. Mr. Pramod Rao, General Counsel, Citibank and Mr. Ritvik Lukose, CEO, Vahura addressed the gathering briefly. The evening also saw some IDIA scholars sharing their life stories and experiences.

Happy after such a successful event, Mr. Kranti Vanga, Executive Vice-President, IDIA remarked, "It was incredible to see such an enthusiastic response to the IDIA Football League (IFL) 2014, and we are very grateful to our sponsors and all the 14 participating teams, who supported us wholeheartedly despite short notice. Considering how successful the event was and the wonderful feedback we've received from the legal fraternity in Mumbai, we intend to make the IFL an annual fixture."

Live Law had reported IFL 2014 from its inception, more can be read here