Ireland's Abortion Referendum: It Was In The Death Of An Indian Woman That The Irish Found Their Voice 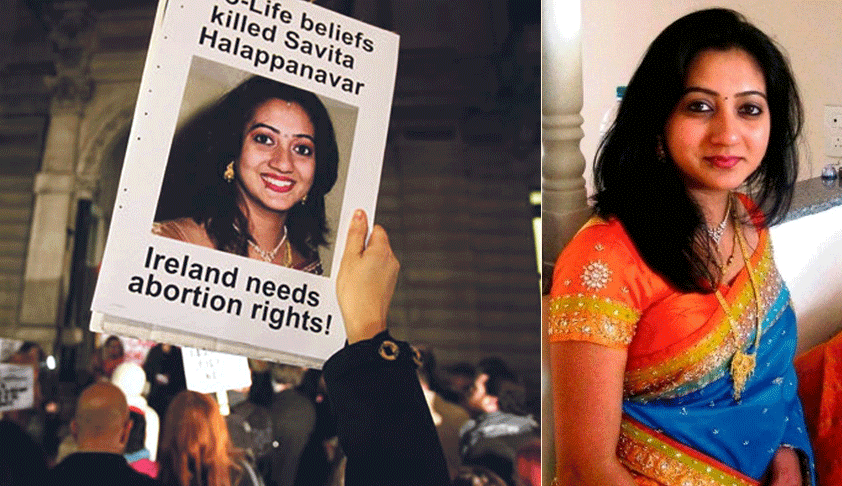 For the second time in three years, Ireland on Friday voted overwhelmingly in favour of a progressive social change. 66.4 percent people voted to repeal its barbaric anti-abortion law, with Ireland's citizenry standing their ground with the image of an Indian woman emerging as the face of the growing call for change.Almost six years after her death, Indian-origin dentist Savita...

For the second time in three years, Ireland on Friday voted overwhelmingly in favour of a progressive social change. 66.4 percent people voted to repeal its barbaric anti-abortion law, with Ireland's citizenry standing their ground with the image of an Indian woman emerging as the face of the growing call for change.

Almost six years after her death, Indian-origin dentist Savita Halappanavar's story galvanized the pro-choice campaigners across Ireland. Dr. Halappanavar, a dentist, and her husband, an engineer, resided in Galway. Their life, however, took a vile turn when 17 weeks pregnant, Dr. Halappanavar went to the hospital with back pain on October 21 and the doctors said she was having a miscarriage.

She was not allowed to undergo an abortion for days until the fetus's heartbeat stopped. By this time, she had already contracted an infection, and she died of septicemia the following day. An investigation by Ireland’s national health service, in fact, revealed that the confusion over the country's abortion law contributed significantly to her death. It was in her death that several Irish women found their voice.

Her name soon became a rallying cry, and thousands gathered outside the Irish Parliament after the news of her death spread. While there were several such cases post the 8th amendment which introduced the ban in 1983, it is widely believed that a deeply ingrained sense of responsibility that Irish people feel for visitors and newcomers weighed heavily on the conscience of the nation.

The repeal movement soon gained momentum, with Twitterati joining in with hashtags of ‘#RepealTheEighth’ and ‘#TogetherForYes’. When the vote was held on May 25, thousands reportedly returned to the island from different parts of the world just to cast their ballot.

On Friday, after Ireland voted decisively in the referendum to reform the country's abortion laws, Dr. Halappanavar's name was chanted across the streets, with flowers, notes and candles amassed at a mural of her face in central Dublin. Her smiling image gleamed behind the word "YES", with a message reading, "Sorry we were too late, but we are here now. We didn't forget you."

Notably, this wasn't the first time that Ireland has gone to the polls specifically on the issue of abortion. Similar referendums were held back in 1983, 1992 and 2002. Here's a timeline:

Ireland, being a staunch Catholic state, already had a law in place, called the Offences against the Person Act, 1861, which criminalized abortion with imprisonment for up to life. However, in 1983, pro-life activists lobbied the government for a referendum, demanding that the protection for the unborn be included in the constitution.

Consequently, a vote was held on 7 September, 1983, for adding the 8th amendment to the Constitution of Ireland. The amendment, which added a new sub-section after section 3 of Article 40, read: "The state acknowledges the right to life of the unborn and, with due regard to the equal right to life of the mother, guarantees in its laws to respect, and, as far as practicable, by its laws to defend and vindicate that right."

With 66.9 percent people voting yes, the referendum was passed, giving equal rights to the mother and the unborn. Abortion has been banned in Ireland ever since.

The genesis of these three amendments lies in the famous Attorney General v. X case of 1992, which concerned a 14 year old rape survivor who claimed to be suicidal after she was prevented from travelling to Britain for an abortion. The Supreme Court had then ruled in favor of the girl, opining that she had the right to an abortion due to the "real and substantial risk" to her life, both physically and mentally.

Three amendments were then placed before the Irish people in November, 1992. The 12th amendment attempted to remove suicide as a ground for abortion, while allowing termination on the ground of there being a real threat to the life of the mother. This was rejected with 65.35% Irish people voting against it.

The other two amendments sought to facilitate women travelling abroad for terminations, and receiving information about services in other countries that could be available to them. These were both passed and added to the Constitution. While another attempt was made in 2002 to remove suicide as a ground for abortion, it was rejected with a marginal vote of 50.43 percent people voting against it.

Sadly enough, while the 1992 case did set a precedent, the exception did not apply to Dr. Halappanavar as the doctors did not identify her infection in time or as being life-threatening. Besides, even though the amendments allowed women to travel abroad for abortions, most women couldn't exercise the option due to financial constraints.

The years that followed saw supersession of the 1861 law with the Protection of Life During Pregnancy Act of 2013 that made it an offence to intentionally destroy unborn human life. The legislation essentially adopted the wordings of the Supreme Court's ruling in the 1992 case. Severe criticism was also meted out by the European Court of Human Rights, which through several rulings, insisted on more clarity on the law relating to abortion in circumstances where the mother's life is at risk. It in fact ruled that the Irish abortion laws violated basic rights of equality and freedom of choice of women.

Letting go of the "dark past"

Irish journalist and broadcaster Una Mullally in a recent article recalled her experience with sex education in her primary school, which she said comprised of a woman talking about their souls becoming dirty with sin, and an anti-abortion activist stepping in with images of fetuses in dumpsters.

Friday's referendum, she now hopes, would aid in the resignation of such attitudes towards women’s rights to her country's "dark past", which she confidently asserts most of the country's citizens are ready to get rid of.

The vote now paves way for the Thirty Sixth Amendment of the Constitution Bill, 2018, which intends to replace the 8th amendment with the text: "Provision will be made by law for the regulation of termination of pregnancy."

With the passage of this Bill, a legislation would be introduced allowing abortions during the first 12 weeks of pregnancy, and up to the 24th week in exceptional circumstances such as fatal fetal abnormality, risk to the life of the mother or a risk of serious harm to the mother. Beyond 24 weeks, abortion will be allowed only for fatal fetal abnormalities.

Pro-choice activists are now batting for the new law to be named after Dr. Halappanavar, to recognize the "great debt" the Irish people owe to her. Besides, all eyes are now set on Theresa May, who is under pressure to give MPs a free vote on legalizing abortion in Northern Ireland. While it is yet to be seen if these demands would be accepted, the referendum itself is a huge victory for women's rights not just in Ireland but throughout the world.

Here's to hoping that the referendum assumes a larger role in freeing women's bodies from becoming political battlegrounds, especially at a time when President of the United States of America Donald Trump is backing stripping of federal funding from women’s health care clinics that offer abortions. The referendum in Ireland is therefore not a "happily ever after", not an ending, but a "once upon a time" of a tale that is just beginning to be sewn together by woman across the globe.