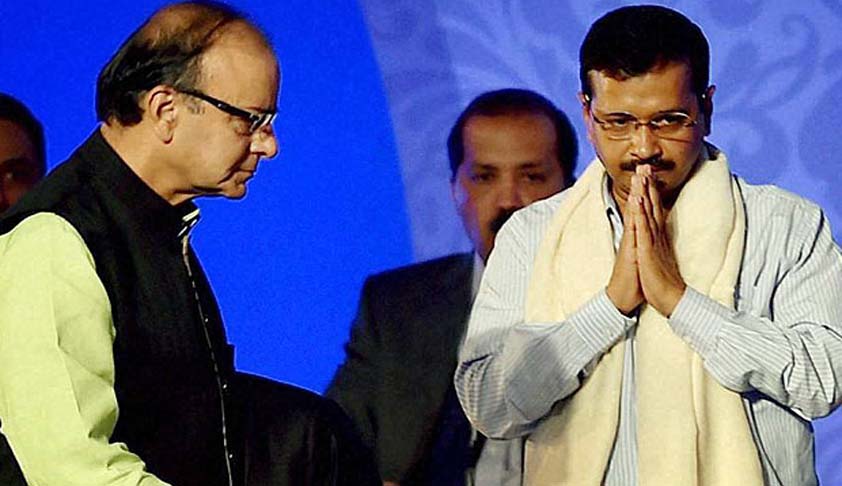 The defamation suits emanating out of the DDCA row between Union Finance Minister Arun Jaitley and Delhi Chief Minister Arvind Kejriwal came to an amicable closure on Tuesday with the Delhi High Court allowing their joint applications for compromise following the latter’s unconditional apology.

The high court allowed their joint application for compromise thereby closing the two Rs 10-crore defamation suits filed by Jaitley against Kejriwal and his aides.

Early on Tuesday, Justice Manmohan allowed closing of the defamation suit filed by Jaitley in 2017 after senior advocate Ram Jethmalani, who was then representing Kejriwal, allegedly used derogatory words during his cross-examination last year in the original defamation suit emanating out of the AAP leader’s allegations of corruption in Delhi and District Cricket Association during the BJP leader’s tenure as its president.

Justice Manmohan accepted the written undertaking of Jaitley, Kejriwal and his aides and decreed the suit in accordance with the settlement wherein Jaitley had accepted the unconditional apology tendered by the AAP leaders on April 1.

Later in the day, Justice Rajiv Sahai Sahai Endlaw allowed their plea for settlement of the original defamation suit filed way back in 2015.

With this, Jaitley would not be pursuing suit against Kejriwal, Raghav Chadha, Sanjay Singh, Deepak Bajpai and Ashutosh, who had all apologized to the BJP leader in separate letters.

The suit will, however, continue against Kumar Vishwas, who was not present before the court on Tuesday.

Justice Endlaw asked Jaitley’s counsel Manik Dogra to inform Vishwas about the day’s development and that he be present before the court on April 26.

It is to be noted that Kejriwal, Ashutosh, Kumar Vishwas, Sanjay Singh, Deepak Bajpai and Raghav Chadha had way back in December, 2015 made statements accusing Jaitley of massive corruption in the DDCA under his chair from year 2000 to 2013.

Jaitley had then filed a criminal defamation suit.

It was during the cross-examination in this suit on May 17, 2017, that Jethmalani used words like “crook” and “guilty of crimes and crookery” etc., for Jaitley.

This led to the senior BJP leader filing another defamation suit.

Kejriwal later said Jethmalani had used the words without his knowledge or instruction. Jethmalani then quit the case accusing him of using even more offensive language for Jaitley in his discussions.

Recently, with Kejriwal going on an apology spree, the AAP leader and his aides tendered an apology to Jaitley.

In their letter dated April 1, the CM said, “I had made certain statements about you in December 2015 and thereafter in connection with your tenure as the President of the Delhi and District Cricket Association. These allegations also form part of the subject matter of proceedings currently pending adjudication before the Delhi High Court and Patiala House Court.”

“…these allegations made by me were based on information and papers furnished before me by certain individuals who represented to have first-hand insight into the affairs of DGCA. However, I have recently discovered that the information and the imputations contained therein are unfounded and unwarranted and I was clearly misinformed into making these allegations. Therefore, I unequivocally withdraw all the allegations made by me in question whether in print, electronic or social media against you.  I offer my sincere apology to you and your family members for any harm caused to your reputation as a consequence of my allegations”.

He also reiterated that the disparaging statements made by Ram Jethmalani during the examination in the civil suit pending before the Delhi High Court were made without his knowledge or instructions.

Accepting the apology, Jaitley and the AAP leaders filed a joint plea in the high court on Monday for compromise of the suit. Jaitley said he has accepted the apology and did not wish to prosecute the matter further.

With this, the suit against the apologetic AAP leaders comes to rest.