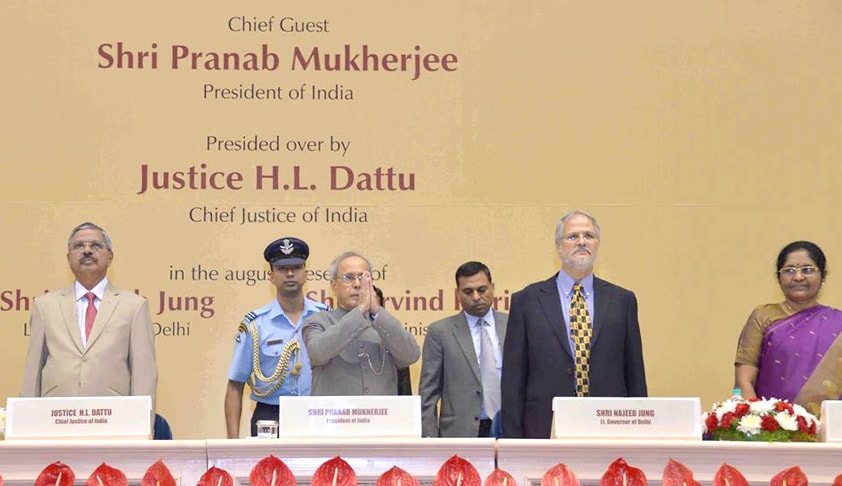 The President said that he is happy to note that the theme of the Delhi High Court’s Golden Jubilee Celebrations is ‘JUSTICE FOR ALL’. “This phrase, to my mind, implies empowerment of the weak and equal treatment of law irrespective of one’s individual identity”, Mr. Mukherjee said. He also added that the this country has thrived due to its power of assimilation and tolerance. “Our pluralistic character has stood the test of time. Our ancient civilization has over the centuries accommodated our diversities. Multiplicity is our collective strength which must be preserved at all costs. It finds reflection in the various provisions of our Constitution”, he said

The President also congratulated the Bench and the Bar of Delhi High court and said “ With each passing decade, the Delhi High Court has been served by Judges who have provided intellectual depth, vigour and vitality necessary to create a world-class institution. That this Court has contributed 25 illustrious Judges to the Supreme Court provides eloquent testimony to the high sense of duty prevailing amongst its Judiciary”. He also opined that technology solutions can fasten the process of justice and make it easier for the litigants as well.  “Judiciary, which is one of the three important pillars of our democracy, is the final interpreter of the Constitution and laws. It must help maintain social order by swiftly and effectively dealing with those on the wrong side of the law. As an upholder of the Rule of Law and enforcer of the right to liberty, the role of the Judiciary is sacrosanct. The faith and confidence people have in the Judiciary must be always maintained. For justice to have meaning for the people, it must be accessible, affordable and quick”, he said.

The president also added “Judicial activism should not lead to the dilution of separation of powers. Each organ of our democracy must function within its own sphere and must not take over what is assigned to the others. In the exercise of powers by the legislature and executive, it is subject to judicial review. However in the exercise of powers by the judiciary, the only check possible is self-imposed discipline and self-restraint by the judiciary. The balance of power between the three organs of the state is enshrined in our Constitution. The Constitution is supreme. The equilibrium in the exercise of authority must be maintained at all times. “