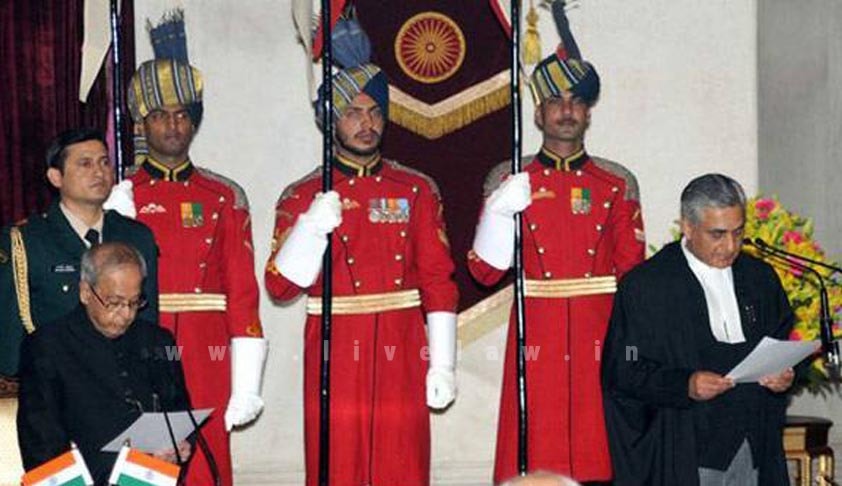 Watch the video here. Courtesy - DD News.[embed]https://youtu.be/S6H82mGlM4g[/embed]Justice T.S.Thakur has sworn in as the 43rd Chief Justice of India. He succeeded Justice H L Dattu who demitted office yesterday. Justice Thakur has tenure of over a year as Chief Justice of India.As an AdvocateBorn on 4th January 1952, Justice Thakur joined his father Shri D.D. Thakur’s chambers as...

Born on 4th January 1952, Justice Thakur joined his father Shri D.D. Thakur’s chambers as an Advocate in 1972. He practised in Civil, Criminal, Constitutional, Taxation and Service matters in the High Court of Jammu & Kashmir and designated as a Senior Advocate in the year 1990.

Justice Dattu reportedly said on Tuesday, "I have practiced before him(Justice Thakur). Coincidentally, I had argued my last case as an advocate before him. Justice Thakur was sitting with the Acting Chief justice of Karnataka HC when I was arguing a case. At 11.45 am that day, the acting chief justice asked me to stop. That is because he was informed that the notification for my appointment as judge had come."

In 2013, Apex Court bench headed by Justice Thakur had made it compulsory for all the courts to determine the aspect of compensation for victims in every criminal case. In Ankush Shivaji Gaikwad vs State Of Maharashtra, it was held “While the award or refusal of compensation in a particular case may be within the Court's discretion, there exists a mandatory duty on the Court to apply its mind to the question in every criminal case. Application of mind to the question is best disclosed by recording reasons for awarding/refusing compensation.”

By a judgment in 2014, Justice Thakur’s bench ruled that any person who has faced a criminal case cannot get a job in the police force, even if he or she is acquitted or reaches a settlement under the law. In February 2015, a bench headed by Justice Thakur held that polygamy was not an integral part of any religion and that the State could regulate such practices in the interest of public order, health and morality.

Speaking at a function organised for bidding farewell to Justice H.L. Dattu on Wednesday, Justice Thakur reportedly said "I think in times to come, one of the challenges that we will have is how to live up to the expectations of the people in this country in terms of making the process of appointment of judges which has always attracted all types of criticisms on account of absence of so-called transparency, so-called absence of objectivity and so on. We need to work together and find solutions for it".

Justice H.L Dattu reportedly said :  "Whatever small foundations I have laid to make the Supreme Court a better institution, I am sure Justice Thakur will take it forward. He will do much better than me."