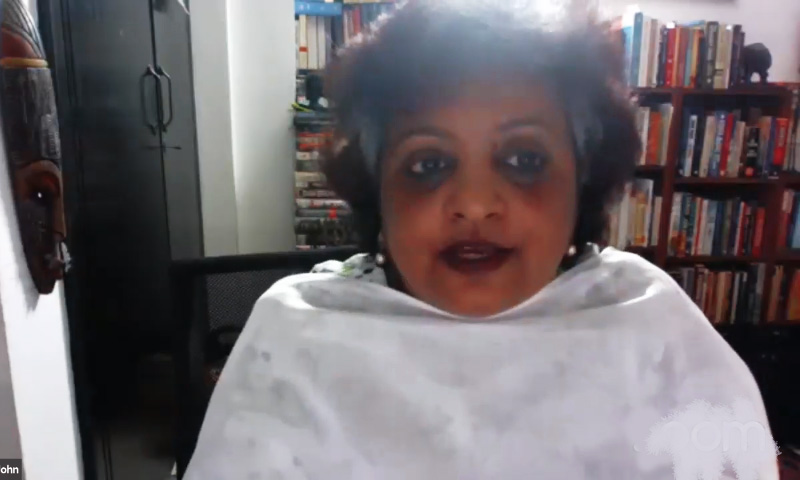 In a highly educative and enlightening session, Senior Advocate Rebecca M John discussed various important strategies, that could be employed by defence lawyers for an effective criminal trial.John, who has handled notable cases such as Arushi Talwar, Hashimpura, 2G trial etc, was talking at a webinar organized by LiveLaw on the topic "Strategies of a Defense Lawyer in a Criminal Case" as part...

In a highly educative and enlightening session, Senior Advocate Rebecca M John discussed various important strategies, that could be employed by defence lawyers for an effective criminal trial.

John, who has handled notable cases such as Arushi Talwar, Hashimpura, 2G trial etc, was talking at a webinar organized by LiveLaw on the topic "Strategies of a Defense Lawyer in a Criminal Case" as part of Law Practitioners series.

Excerpts from her session :

She said that there were "no real, clear answers" to the vexed question of what is the appropriate time to move a bail application.

Comparing the initial phases of investigation to a "cat and mouse game", she said that when the evidence is coming against the accused in a "fast and furious" manner, it would be advisable to wait till things settle down.

Again, there are no clear answers to this, and it will depend on the facts and circumstances of each case.

One can try moving the primary court, just to judge where the investigation agency is taking the case against the accused, and then move the superior court after getting an idea about the progress of investigation.

However, there is no point in moving the superior court if you are certain that the application will be dismissed.

Dealing with opposition to bail

The Senior Advocate said that one must be prepared to deal the grounds of opposition to bail.

There are some standard oppositions, such as, the applicant is an accused in other cases, there are chances of tampering of evidence, accused is not cooperative with the investigation etc.

John highlighted that mere pendency of other criminal cases is not a ground to deny bail.

In this regard, she referred to a recent Supreme Court decision, Prabhakar Tewari vs State of Uttar Pradesh, which held that factors like gravity of offence and pendency of other cases by alone are not sufficient to deny bail.

Often, the prosecution argues that the grant of bail will send a wrong message to the society. This is also an untenable argument.

Recently, the Delhi High Court ruled that bail cannot be refused on such grounds.

Quoting that judgment authored by Justice Anup J Bhambhani in the case, Firoz Khan vs State she said "remit of court to dispense justice in accordance with law and not to send message to society".

Another ground often raised by the prosecution could be that the accused is not cooperating with the investigation.

This is also a legally flawed argument. It must be remembered that the accused has the right to silence, and right against self-incrimination, which is protected under Article 20(3) of the Constitution.

In the context, John referred to a recent judgment of Delhi High Court in Navendu Babbar v State of NCT of Delhi, in which held that the non-cooperation with the investigation cannot be a ground to reject bail.

The Investigating Officer cannot be heard to say that till the applicant shares with him every shred of evidence which he thinks exists, applicant has to be kept in custody, the Court had observed in that case.

Also, remember the golden rule that bail is the rule, and jail is the exception.

Referring to Delhi High Court judgment in Ashok Sagar v State, she said that even seriousness of the offence is not a determinative factor to reject bail.

"Incarceration during trial is not punitive, but a measure to secure the presence of accused for trial", she quoted from the judgment.

One of the unwritten principles of law on bail is that change of circumstance is ground to consider subsequent bail application.

Even if bail application is dismissed at the investigation stage, that is not the end of the matter.

Filing of chargesheet is a change in circumstance. By and large, courts will relook the evidence and consider the bail application afresh, after the filing of final report.

At that stage, the case against the accused is crystallized, and evidences and witness statements are secured.

In the 2G Case (Sanjay Chandra vs CBI), the Supreme Court held that once the chargesheet is filed, the accused can taken benefit, and bail should be ordinarily granted, as the investigation is over and the accused is not required for any purpose other than trial.

Therefore, post the filing  of chargesheet, you can start all over again.

Stating that this was an area where criminal lawyers do not pay much attention, she said that multiple strategies could be employed at the remand stage.

Every remand application moved by police must be opposed in writing, as far as possible.

When you oppose a remand, and further remand is not granted, the consequence is that accused is released on bail.

You must have conversations with the accused during this time. If the accused says he has been forced to sign documents under duress, or that confessional statements have been extracted using fore, you must immediately put that on record in opposition to remand application.

Even if that does not result in any immediate advantage, it can be helpful later, at the stage of cross-examination.This is very relevant, as during investigation stage, police relies very heavily on confessional statements, even if they are inadmissible in evidence. So, if you put on record your opposition to confessional statements at remand stage, it could be helpful.

Also, very often, we hear tales of custodial torture, and they should never be taken lightly.

She said that as a junior lawyer, when she used to interact with the accused, the first thing she asked was if they were subjected to torture.

If there are instances of torture, they must be immediately brought to the notice of the Court. The Court must be asked to order an independent enquiry and medical examination.

Also, when remand applications are produced, you must insist that case diaries are produced and examined by magistrate and that magistarate signs the case diaries with the date so that there is no scope for further interpolations.

This is an important safeguard for the rights of the accused, and every defence lawyer must be cognizant of  it.

After the 2005 amendment to Code of Criminal Procedure, Section 54A has been introduced, allowing accused to be put to Test Identification Parade (TIP).

Prior to 2005, the prosecution would only rely on Section 9 of the Indian Evidence Act for TIP.

The accused can refuse to submit to TIP, but the refusal must be accompanied by valid grounds.

She recalled a case, where one of her clients had refused to submit to TIP, even without a legal representation at the stage of investigation. He had objected to it by clearly stating that while he was in custody, he was shown to certain witnesses. He even accurately described the features of the witness.

She added that at the stage of the trial, his clear and accurate objection to TIP came in handy.

In today's age where arrest is followed by press conferences and publication of photographs in media, an accused can easily plead prejudice due to TIP by stating that he has been shown to the world.

But mere bland refusal will be counter-productive, she cautioned.

Contrary to the popular misconception, even an accused can file application under Section 156(3) CrpC seeking to monitor investigation to ensure proper probe.

If the accused has a credible counter narrative against the police version, Section 156(3) can come to the aid of the accused.

Putting out a counter-narrative at the first stage itself, can be very helpful as you go forward to the trial.

So if the investigative report has not investigated aspects of the case which the accused feels are material for his defence, or to understand the case in totality, an application can be moved by the accused seeking further investigation.

This is a strategy that can be employed to highlight your defense and for ensuring that a fair investigation takes place.

When to seek quashing of FIR/Chargesheet

Stating that there are no clear answers to this, John advised against approaching HC for quashing of FIR/Chargesheet when there are questions of facts requiring trial, which will persuade the Court to decline jurisdiction.

Better to avoid inviting an adverse order in such cases, she suggested.

Strategic use of Section 207 CrPC

John underlined the importance of stage of Section 207 CrPC. This is the first stage where the accused legally gets the documents of prosecution.

Care must be taken to see that all documents and statements are supplied by prosecution. When there are voluminous docs, especially in financial crimes, chances of missing documents are there.

There should be "fair disclosure" from prosecution, John said, referring to SC decisions in Sidhartha Vashisht @ Manu Sharma vs State of NCT of Delhi and V K Sasikala v State.

"Section 207 CrPC must be strategically used to get every ounce of information from the prosecution", she added.

Use of Section 91 CrPC even during stage of investigation

If you feel the need to summon material for your defence, which would otherwise be destroyed, Section 91 CrPC can be employed to ask the Court to summon such material.

The only caveat is that you have to convince the court of the relevance the material.

With respect to Call Data Records, or any other evidence which are fundamental or material for the case, you can file section 91 CrPC application, even at the stage of investigation to summon and preserve the record.

At the stage of charge

As regards seeking discharge, the law is, if two views are possible at that stage, the Court should adopt the view favouring the accused, and should not act as a mouthpiece of the prosecution, John said.

The Court is entitled to sift evidence, for the limited purpose of seeing if prima facie case is made out.

You can nuance your strategy at this stage, by pleading that there are two views possible and that the standard has not crossed the threshold of suspicion.

If it is a summons case procedure, you must put out your defence at the stage of Section 251 CrPC notice, if you have a concrete case.

What if charges are framed against you?

The thumb rule is, if the findings are unsustainable on evidence you must challenge the order framing charge. But if you feel that your case could be worsened by an adverse findings from a superior court, better not to challenge. It all depends of facts and circumstances of each cases.

Also Read : How To Prepare For Cross Examination Of Witnesses: Tips From Senior Adv Rebecca John