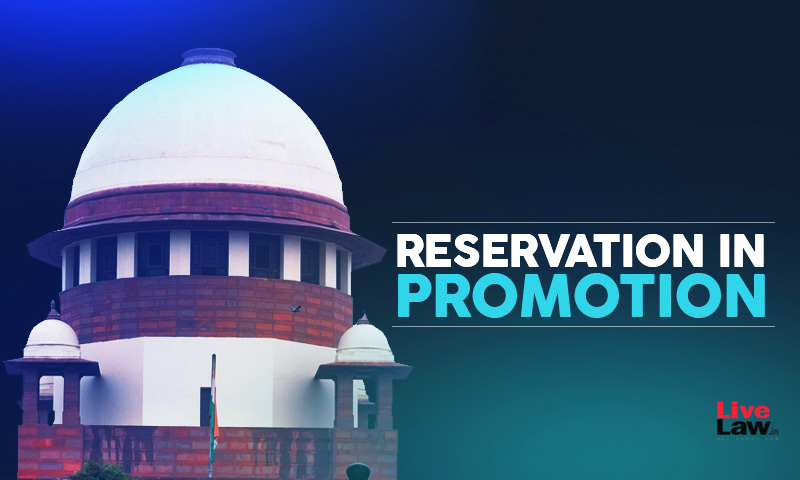 The Supreme Court's recent decision that there is no fundamental right to claim reservation in promotions has become a subject matter of intense debate. The decision was discussed in the Parliament, and the Centre has told the House that the matter was under the study and consideration of the Government at "high level".In this backdrop, this article traces the legal evolution of...

The Supreme Court's recent decision that there is no fundamental right to claim reservation in promotions has become a subject matter of intense debate.

The decision was discussed in the Parliament, and the Centre has told the House that the matter was under the study and consideration of the Government at "high level".

In this backdrop, this article traces the legal evolution of the concept of "Reservation in Promotions".

In this case (General Manager, Southern Railway v A Rangachari), validity of the circulars issued by the Railway administration providing for reservation in favour of Scheduled Castes / Scheduled Tribes in promotions (by selection) was questioned. The contention was that Article 16(4) of the Constitution does not take in promotions and that it is confined to direct recruitment only. The Madras High Court agreed with this contention. It held that the word "appointments" in clause (4) did not denote promotion and further that the word "posts" in the said clause referred to posts outside the cadre concerned.

On appeal, the Supreme Court reversed by a majority of 3 : 2.  Certain notable points from the judgment written by Justice Gajendragadkar for the majority are as follows :

In this case, validity of an order made by the Government of Punjab providing for reservation in promotion (in addition to initial recruitment) was questioned. Though the High Court upheld the challenge, the Supreme Court (Shah, Hegde and Grover, JJ.) reversed and upheld the validity of the Government order following Rangachari (supra).

This case was not exactly pertaining to reservation in promotions, but was regarding the legality of a concession granted by Government to SC/ST members for availing departmental promotion.

In this case, 7-judge bench upheld by 5:2 majority the amendment brought by State of Kerala to its service rules to grant exemption to members of SC/STs from appearing in a departmental examination for promotion.

The majority held that Article 16(4) was not in the nature of an exception, and was a facet of equality under Articles 14 and 16(1).

"The rule giving preference to an unrepresented or under-represented backward community does not contravene Art.14, 16(1) or 16(2)", held the Court.

No reservation in promotions : Indira Sawhney v Union of India (1992)

The Supreme Court's nine-judge constitutional bench in Indra Sawhney v. Union of India (1992), commonly called as Mandal Commission case,  while allowing the extension of the reservation policy to Other Backward Classes (OBCs), held that reservation, under Article 16(4), cannot be extended to subsequent promotion within the place of employment.

Among several other issues on reservation, the Court also considered this specific issue :

Ultimately, the judgment decided that reservation would apply at the stage of initial entry only and would not apply at the stage of promotion. The majority disagreed with the view expressed in Rangachari. Concerns regarding efficiency of administration were expressed by the majority in this judgment. It was even remarked that "crutches cannot be provided throughout one's career".

"While it is certainly just to say that a handicap should be given to backward class of citizens at the stage of initial appointment, it would be serious and unacceptable inroad into the rule of equality of opportunity to say that such a handicap should be provided at every stage of promotion throughout their career. That would mean creation of a permanent separate category apart from the mainstream a vertical division of the administrative apparatus. The members of reserved categories need not have to compete with others but only among themselves. There would be no will to work, compete and excel among them. Whether they work or not, they tend to think, their promotion is assured. This in turn is bound to generate a feeling of despondence and 'heart burning' among open competition members. All this is bound to affect the efficiency of administration.

Putting the members of backward classes on a fast track would necessarily result in leap frogging and the deleterious effects of "leap frogging" need no illustration at our hands. At the initial stage of recruitment reservation can be made in favour of backward class of citizens but once they enter the service, efficiency of administration demands that those members too compete with others and earn promotion like all others; no further distinction can be made thereafter with reference to their "birth mark", as one of the learned Judges of this Court has said in another connection. They are expected to operate on equal footing with others. Crutches cannot be provided throughout one's career. That would not be in the interest of efficiency of administration nor or at in the larger interest of the nation".

Though the Court held that Art.16(4) does not permit provision for reservations in the matter of promotion, it did not unsettle the promotions already given by applying reservations. The judgment was held to operate only prospectively.

There was public opinion against the judgment and the Parliament, in 1995, through the Constitutional (77th Amendment) Act, bypassed the restriction set by the Indira Sawhney, by inserting Article 16(4)(A), thereby, enabling the state to pass laws for reservation in promotion for SCs and STs.

Alongside Article 16(4)(A), the Parliament has inserted Article 16(4)(B) through the Constitutional (81st Amendment) Act in 2000. It ensures that vacant posts arising out of reservation shall be carried out to subsequent years and such vacant posts will not be considered to determine the ceiling of 50% reservation on total number of vacancies.

The Constitutional Amendments which introduced Articles 16(4)(A) and 16(4)(B) were challenged in the SC as violative of basic structure. However,  a five-judge Constitutional bench of Supreme Court in M. Nagaraj v. Union of India (2006) upheld these amendments.

"The impugned constitutional amendments by which Articles 16(4-A) and 16(4-B) have been inserted flow from Article 16(4). They do not alter the structure of Article 16(4). They retain the controlling factors or the compelling reasons, namely, backwardness and inadequacy of representation which enables the States to provide for reservation keeping in mind the overall efficiency of the State administration under Article 335. These impugned amendments are confined only to SCs and STs. They do not obliterate any of the constitutional requirements, namely, ceiling limit of 50% (quantitative limitation), the concept of creamy layer (qualitative exclusion), the sub-classification between OBCs on one hand and SCs and STs on the other hand as held in Indra Sawhney, the concept of post-based roster with inbuilt concept of replacement as held in R.K. Sabharwal".

The Court also added that the State is not bound to make reservation for SC/ST in promotions.  Certain conditions were also introduced by the Court for granting reservation in promotion. It was held that State has to collect "quantifiable data showing backwardness of the class and inadequacy of representation of that class in public employment in addition to compliance of Article 335(which speaks of efficiency in administration)". It was added that such reservations should not breach the 50% cealing limit or obliterate the creamy layer or extend the reservation indefinitely.

It may be pertinent to note that the Court in this case observed that the concept of "creamy layer" is applicable even to SC/STs.

"The ceiling-limit of 50%, the concept of creamy layer and the compelling reasons, namely, backwardness, inadequacy of representation and overall administrative efficiency are all constitutional requirements without which the structure of equality of opportunity in Article 16 would collapse...

The State is not bound to make reservation for SC/ST in matter of promotions. However if they wish to exercise their discretion and make such provision, the State has to collect quantifiable data showing backwardness of the class and inadequacy of representation of that class in public employment in addition to compliance of Article 335. It is made clear that even if the State has compelling reasons, as stated above, the State will have to see that its reservation provision does not lead to excessiveness so as to breach the ceiling-limit of 50% or obliterate the creamy layer or extend the reservation indefinitely..."

It is clear, therefore, that Nagaraj (supra) has, in unmistakable terms, stated that the State has to collect quantifiable data showing backwardness of the Scheduled Castes and the Scheduled Tribes for giving them reservations in promotions.

A 5-judge bench of the SC held in the 2018 decision in the case of Jarnail Singh v. Lachhmi Narain Gupta (2018) held that there cannot be an insistence on collection of quantifiable data of backwardness in relation to SCs and STs. Any such insistence was held to be against the decision in Indra Sawhney case.

"The conclusion in Nagaraj (supra) that the State has to collect quantifiable data showing backwardness of the Scheduled Castes and the Scheduled Tribes, being contrary to the nine-Judge Bench in Indra Sawhney (1) (supra) is held to be invalid to this extent", the bench ruled.

The bench however left undisturbed the findings in Nagraj regarding application of "creamy layer" test to SC/STs.

"when Nagaraj (supra) applied the creamy layer test to Scheduled Castes and Scheduled Tribes in exercise of application of the basic structure test to uphold the constitutional amendments leading to Articles 16(4-A) and 16(4-B), it did not in any manner interfere with Parliament's power under Article 341 or Article 342. We are, therefore, clearly of the opinion that this part of the judgment does not need to be revisited"

In 2019, the Supreme Court upheld the Constitutional validity of the Karnataka Extension of Consequential Seniority to Government Servants Promoted on the Basis of Reservation (to the Posts in the Civil Services of the State) Act 2018.

The said enactment provided for consequential seniority to persons belonging to the Scheduled Castes and Scheduled Tribes promoted under the reservation policy of the State of Karnataka.

An earlier version of this Act passed in 2002 was held to be unconstitutional by the SC in 2017 on the ground that an exercise for determining 'inadequacy of representation', 'backwardness' and the impact on 'overall efficiency' had not preceded the enactment of the law.

On the basis of the Ratna Prabha Committee report, the Government of Karnataka introduced the Karnataka Extension of Consequential Seniority to Government Servants Promoted on the Basis of Reservation (to the Posts in the Civil Services of the State) Bill 2017 which received assent of the President on 14 June 2018 and was published in the official Gazette on 23 June 2018.

This new law on promotions was upheld by the SC in BK Pavitra II decision in May 2019.

No fundamental right to reservation in promotion

In the latest case of Mukesh Kumar v. State of Uttarakhand (2020) the Supreme Court, reaffirming it's decision in Suresh Chand Gautam v State of U.P. (2016), has denied the request to pass a mandamus to the state to collect quantifiable data relating to adequacy of representation of the SCs and STs. The Supreme Court has reiterated the decision in Ajit Singh case (1999) that reservation is not a fundamental right. Most importantly, the Supreme Court has limited its own power of judicial review when it stated:

"Even if the under- representation of Scheduled Castes and Schedules Tribes in public services is brought to the notice of this Court, no mandamus can be issued by this Court to the State Government to provide reservation in light of the law laid down by this Court in C.A. Rajendran (1968) and Suresh Chand Gautam (2016)...

The State is not bound to make reservation for Scheduled Castes and Scheduled Tribes in matters of promotions. However, if they wish to exercise their discretion and make such provision, the State has to collect quantifiable data showing inadequacy of representation of that class in public services."