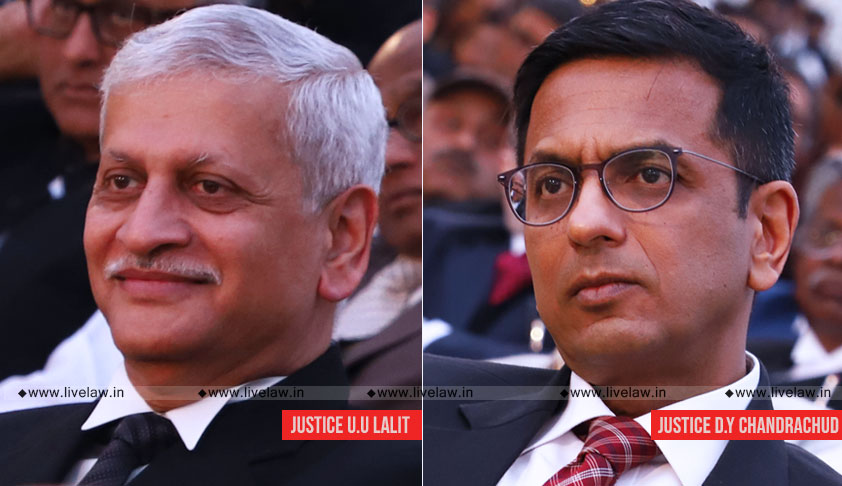 The Supreme Court has upheld the Constitutional validity of the Karnataka Extension of Consequential Seniority to Government Servants Promoted on the Basis of Reservation (to the Posts in the Civil Services of the State) Act 2018. The said enactment provided for consequential seniority to persons belonging to the Scheduled Castes and Scheduled Tribes promoted under the reservation policy of...

The Supreme Court has upheld the Constitutional validity of the Karnataka Extension of Consequential Seniority to Government Servants Promoted on the Basis of Reservation (to the Posts in the Civil Services of the State) Act 2018.

The said enactment provided for consequential seniority to persons belonging to the Scheduled Castes and Scheduled Tribes promoted under the reservation policy of the State of Karnataka.

The bench comprising Justice Uday Umesh Lalit and Justice Dhananjaya Y Chandrachud observed that this law has cured the deficiency noted in BK Pavitra judgment in respect of the 2002 law, and it does not amount to a usurpation of judicial power by the state legislature. The Reservation Act 2018 is a valid exercise of the enabling power conferred by Article 16 (4A) of the Constitution, the bench added.

The Reservation Law Under Challenge

The Karnataka Determination of Seniority of the Government Servants Promoted on the Basis of the Reservation (to the Posts in the Civil Services of the State) Act 2002 was held to be unconstitutional [in BK Pavitra 1] on the ground that an exercise for determining 'inadequacy of representation', 'backwardness' and the impact on 'overall efficiency' had not preceded the enactment of the law.

On the basis of the Ratna Prabha Committee report, the Government of Karnataka introduced the Karnataka Extension of Consequential Seniority to Government Servants Promoted on the Basis of Reservation (to the Posts in the Civil Services of the State) Bill 2017 which received assent of the President on 14 June 2018 and was published in the official Gazette on 23 June 2018.

Various writ petitions were filed before the Supreme Court contending that the Reservation Act 2018 does not take away basis of the decision of this Court in B K Pavitra I and is ultra vires. Senior Advocate Rajeev Dhavan, contended that was no compelling necessity to overrule B K Pavitra I ―except political necessities. It was urged that the Reservation Act 2018 is substantively the same as the Reservation Act 2002. It was also contended that the report of the Ratna Prabha Committee was not in compliance with principles laid down in constitution bench judgments in Nagaraj and Jarnail. The Ratna Prabha Committee report is flawed and does not establish inadequacy of representation and impact on administrative efficiency, it was submitted. The first half of the judgment has in detail reproduced the submissions made by both sides, including by Senior Advocate Indira Jaising and Dinesh Dwivedi

Validity of the assent by the president is non-justiciable

Addressing one of the contention raised in the writ petition questioning the assent of the bill, the bench said

"Once the Bill (which led to the Reservation Act 2018) was reserved by the Governor for the consideration of the President, it was for the President to either grant or withhold assent to the Bill. The President having assented to the Bill, the requirements of Article 201 were fulfilled. The validity of the assent by the President is non-justiciable."

The bench rejected the challenge raised against the Ratna Prabha Committee report. It said:

"The methodology which was adopted by the Ratna Prabha Committee has not been demonstrated to be alien to conventional social science methodologies. We are unable to find that the Committee has based its conclusions on any extraneous or irrelevant material. In adopting recourse to sampling methodologies, the Committee cannot be held to have acted arbitrarily. If, as we have held above, sampling is a valid methodology for collection of data, the necessary consequence is that the exercise cannot be invalidated only on the ground that data pertaining to a particular department or of some entities was not analysed. The data which was collected pertained to thirty one departments which are representative in character. The State has analysed the data which is both relevant and representative, before drawing its conclusions. As we have noted earlier, there are limitations on the power of judicial review in entering upon a factual arena involving the gathering, collation and analysis of data."

The concept of creamy layer has no application in assessing the validity of the Reservation Act 2018 which is designed to protect consequential seniority upon promotion of persons belonging to the SCs and STs. Provisions in regard to retrospectivity in the Ratna Prabha Committee report are neither arbitrary nor unconstitutional, the bench held

The bench further observed that the state has studied in the present case the extent of reservation for SCs and STs in groups A to D, consisting of several cadres. Since, the group includes posts in all the cadres in that group, it can logically be presumed that the state has collected quantifiable data on the representation of SCs and STs in promotional posts in the cadres as well. The data submitted by the State of Karnataka indicates that if consequential seniority is not allowed, there would be under representation of the reserved categories.

Dismissing the batch of petitions, the bench said: