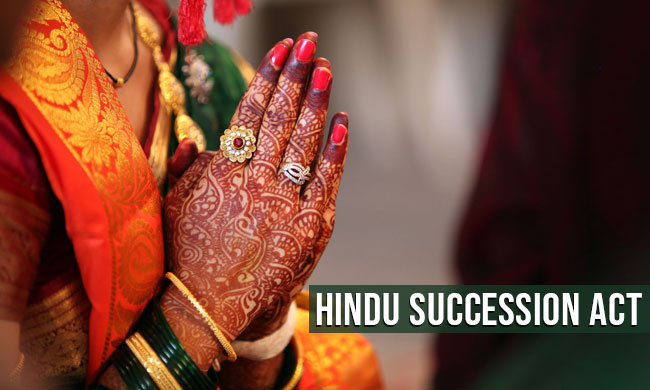 Historically, and also ironically, women under Hindu Law were not entitled to any share in the immovable or movable property either as a daughter or as a wife, of their ancestors. However, in some capacities women were given the Right to Inherit property,but the same were only a limited right of enjoyment to the Property.After India became Independent, the Hindu law relating to property...

Historically, and also ironically, women under Hindu Law were not entitled to any share in the immovable or movable property either as a daughter or as a wife, of their ancestors. However, in some capacities women were given the Right to Inherit property,but the same were only a limited right of enjoyment to the Property.

After India became Independent, the Hindu law relating to property was codified and Hindu Succession Act, 1956 was enacted. It was only by this Act of 1956 that Women's right to property, ie, right to inheritance in a Joint Hindu Family came to be recognised. However, even then a daughter was not made a Coparcener.

In India, there are two Schools of Hindu Law namely 'Mitakshara' and 'Dayabhaga'. Dayabhaga School is followed in limited areas whereas Mitakshara School is widely accepted in large parts of the County. The major difference between the two is with respect to Inheritance and Joint Family system. Mitakshara Law recognises two modes of devolution of property, namely, Survivorship and Succession. The rule of Survivorship applies to the Joint Family Property and rules of Succession apply to separate property under absolute ownership held by the deceased. However,Dayabhaga School recognises only one mode of devolution, which is Succession.

A Joint Hindu Family consists of all persons lineally descended from a common ancestor and includes their wives and unmarried daughters. However, a Hindu Coparcenary is a much narrower body than the Joint Family and includes only those persons, who acquire by birth an interest in the coparcenary property. They are sons, grandsons and great grandsons. The cardinal Doctrine of Mitakshara School is that property inherited by a Hindu from his father, father's father or father' father's father is ancestral property which meant unrestricted heritage as regards his male issues. A property inherited by a Hindu from other relations is his separate property.

The most important incident of coparcenary is that a 'Female' cannot be a coparcener under Mitakshara School. Even a wife, though she is entitled to maintenance out of her husband's property and has to that extent an interest in his property, is not her husband's coparcener. A mother is not a coparcener with her son. Hence, a woman had no absolute right in the joint family much less in the coparcenary, wherein she was not even recognised. However, it was only in the year 2005 that the Parliament amended Section 6 of Hindu Succession Act, 1956 and recognised daughters as a coparcener along a son, thereby granting Woman equal status, as enshrined in the Constitution.With this came the Hindu Succession (Amendment) Act, 2005 into force on September 9, 2005.

Changes were made in the Act of 2005 as the Parliament felt that non-inclusion of daughters in the Mitakshara coparcenary property was causing discrimination to them. Thus the changes were brought about, the intent of which are clear from the Statement of Object and Reasons of the 2005 Amendment Act, which are as follows –

"2. … The retention of the Mitakshara coparcenary property without including the females in it means that the females cannot inherit in ancestral property as their male counterparts do. The law by excluding the daughter from participating in the coparcenary ownership not only contributes to her discrimination on the ground of gender but also has led to oppression and negation of her fundamental right of equality guaranteed by the Constitution …."

Hence, the Parliament in its wisdom deemed it appropriate to bring about equality by the 2005 Amendment Act, amongst male and female heirs amongst Hindus.

The Principal Act of 1956 did not provide for any independent right to the daughter in respect of partition and to demand the partition. The daughters were only able to get share in father's property and the same would arise only on the death of her ancestor. This led to gender discrimination and daughters were left out from enjoying the coparcenary property being violative of Article 14 and 15 of the Constitution of India. Realising the dichotomy and gender discrimination, the Parliament corrected the wrong which had been continuing for Centuries by accepting the recommendation of the Law Commission of India whereby Hindu Succession (Amendment) Bill was passed by both the Houses of the Parliament and Hindu Succession Act, 1956 was amended to include 'Daughter' in coparcenary, because of which she has now been given equal right as that of a 'Son' in respect of the property of the father. The Daughter of a coparcener has been admitted in coparcenary and after the enactment of the Amendment, she has become a coparcener in her own right. The Daughter is also now entitled to dispose of her share of the coparcenary property of her interest, even by way of execution of a Will.

The Amending Act, by substituting Section 6 of The Hindu Succession Act, 1956 has now recognised the right of a Daughter as a Coparcener in her own right and has overridden the basic concept of Coparcenary which included only male members of a Joint Hindu Family, to constitute a coparcenary. Though, this concept has now been substantially modified still a widow, mother and a wife are standing in queue for their admission in Coparcenary.

The Amendment Act of 2005 has also repealed Section 23 of the Hindu Succession Act, 1956 thereby recognising/ granting equal rights to Daughters to seek Partition even in a dwelling house, wholly occupied by male coparcener of joint family. Thus, now a daughter has equal right to seek partition of a dwelling house occupied by member of Joint Family after September 9, 2005 if the family property has not been partitioned until December 20, 2004.

Since the coming of the Amendment, the Supreme Court and various High Courts have had the occasion to deal with this issue, which is of immense importance to the Society as a whole, mainly because of right, livelihood and social fabric of the Society get determined from the Rights flowing in favour of a 'Woman', denied to her since Centuries. Some of the recent pronouncements which require special mention are discussed here in below.

In the case of Ganduri Koteshwaramma V/s. Chakiri Yanadi [(2011) 9 SCC 788], the question which arose before the Supreme Court was"Whether the preliminary decree passed by the trial court on March 19, 1999 and amended on September 27, 2003 deprives the appellants of the benefits of 2005 Amendment Act although final decree for partition has not yet been passed?"

The Supreme Court after citing Section 6 of the Amendment Act of 2005 held that if a final decree of Partition has not been passed, until the commencement of the Hindu Succession (Amendment) Act, 2005, then the preliminary decree had to be amended considering the share of the daughters.

In the case of Prakash & Others V/s Phulavati& Others, [(2016) 2 SCC 36] the Supreme Court while deciding whether the Hindu Succession (Amendment) Act, 2005 will have retrospective effect or will it be prospective held thatthe proviso to Section 6(1) and Sub-section (5) of Section 6 clearly intend to exclude the transactions referred to therein which may have taken place prior to December20, 2004, on which date the Bill was introduced. The Amendment cannot permit reopening of Partitions which were valid when affected. Hence, it was held that the object of giving finality to transactions prior to December 20, 2004 is not to make the main provision retrospective in any manner.

The Court further held that "the rights under the amendment are applicable to living daughters of living coparceners as on 9th September, 2005 irrespective of when such daughters are born …"

Whereas, in the case of Danamma @ Suman Surpur & Another V/s. Amar & Others, [(2018) 3 SCC 343], the Supreme Court was dealing with the Question as to whether, the Appellants, ie, Daughters of Gurulingappa Savadi could be denied their share on the ground that they were born prior to the enactment of the Act of 1956 and, therefore, cannot be treated as Coparceners? Alternate question which arose before the Court was whether, with the passing of Hindu Succession (Amendment) Act, 2005 the Appellants would become coparcener 'by birth' in their 'own right in the same manner as the son' and are, therefore, entitled to equal share as that of a son?

In this case the father had died in the year 2001 and after coming into force of the Hindu Succession (Amendment) Act, 2005, the Daughters had filed an application for Amendment of the Preliminary Decree, which was rejected by the Trial Court on the ground that as the Appellants (Daughters) were born prior to the enactment of the Act hence not entitled to any share in the property of their father. The decision of the Trial Court was upheld by the High Court. However, the Supreme Court allowed the Special Leave Petition while observing that as per provisions of the Amended Section 6, on and from the commencement of the Amended Act, 2005 the Daughter of a Coparcener shall by 'Birth' become a Coparcener in her own right in the same manner as the Son.

In view of the above, it is clear that now with the Amendment to the Hindu Succession Act, 'Justice' has been done to Women by granting them equal right & status with regard to inheritance and also equality before law, as enshrined by Article 14 of the Constitution of India. Hence, a daughter of a coparcener becomes a 'Coparcener' if the property upon which she is staking claim has not been partitioned before December 20, 2004. Thus, the rights of a Daughter cannot be taken away, if a Final Decree of Partition has not been passed after coming into force of the Hindu Succession (Amendment) Act, 2005. Whereas, even if a Preliminary Decree has been passed by a Court of Competent Jurisdiction, prior to passing of Amended Act of 2005, the same can be amended on the plea of the 'Daughter'.