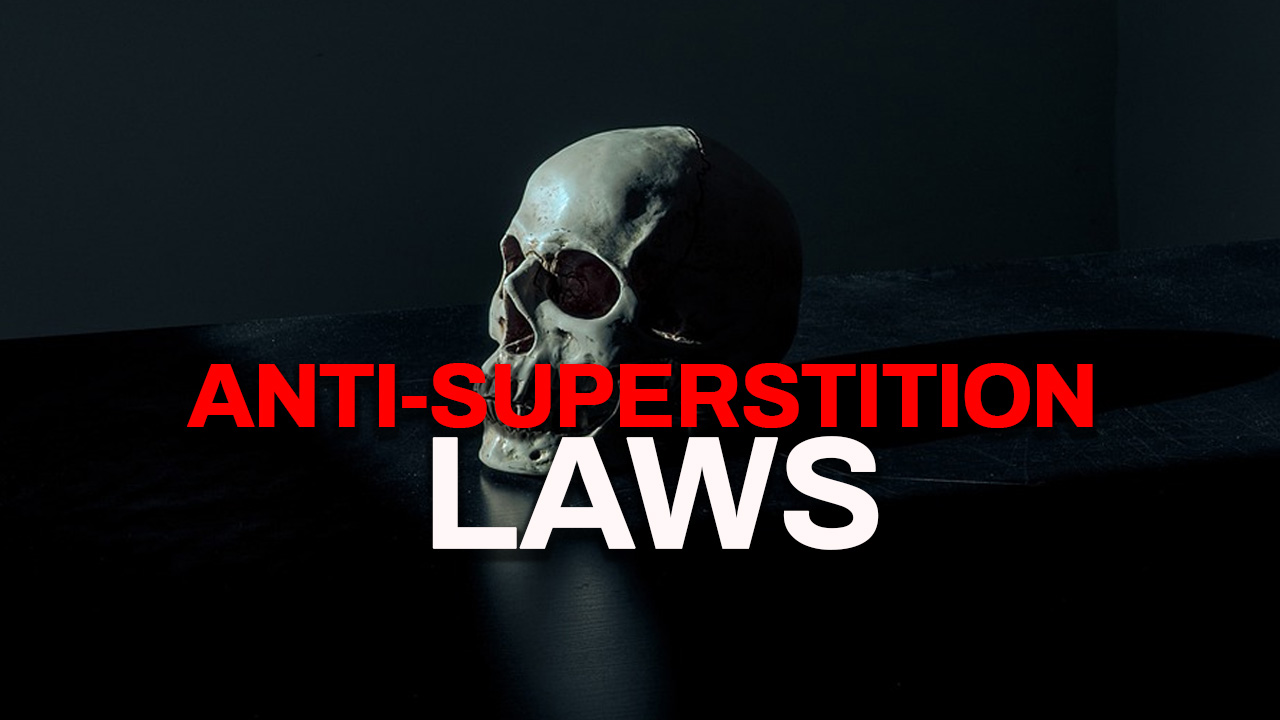 Three persons including a couple have been arrested in Pathanamthitta district of Kerala in a suspected case of human sacrifice. The couple is alleged to have killed two middle-aged women with the hope that their "sacrifice" will bring them financial prosperity. While the incident has shocked people in the state called God's own country, and elsewhere, the diabolical murder of the two women has also renewed the calls for enactment of an anti-superstition law in Kerala.

Since 1999, at least eight states in India have enacted laws to deal with the crimes of witch hunting, performing of black magic or witchcraft and other superstitious actions that take shape of usual but brutal crimes. The terminology, punishment for such actions and the acts that have been criminalised vary from state to state under these enactments.

While the enactments do not particularly define what black magic or superstition means, they criminalise the practices which have been widely reported for many decades. The laws are particularly aimed against the false claims of "possessing magical or miraculous remedies or powers and anti-social and harmful activities" that fly in the face of authentic and scientific medical remedies and research. The laws also specifically speak about the abhorrent practice of human sacrifice.

However, since many of the practices trace their origin to religious beliefs, the governments have been reluctant to bring laws against superstition. Resultantly, some of the laws, like in states of Maharastra or Karnataka, specify that the provisions shall not apply to certain religious prayers and celebrations. The anti Black Magic Act in Maharastra even states that the law will not apply to publicity and propagation of miracles of deceased saints and religious preachers "which do not cause physical injury or financial loss".

It has also been many years since the laws have been amended in some of the states — an accused can get away with few months of jail after committing the offences mentioned in the Acts.

While there are many provisions in criminal code which can be used to deal with the actions that form part of such outdated practices, there has also been a demand from many groups and individuals for enactment of a central law to deal with the widespread problem.

Bihar was the first state to India to enact a law in 1999 to prevent witch practices and such instances where a woman is declared a witch and tortured. A witch or daain under the The Prevention of Witch (daain) Practices Act, 1999 means a woman who has been "identified" by someone else as a person "having the power of intention of harming any person through the art of black magic, evil eyes, or 'Mantras'."

A similar law also exists in Jharkhand. The state high court last year took suo motu cognisance of a news report about the killing of five persons of a family in Buruhatu-Amtoli Pahar, Gumla - the village council there had allegedly "sentenced" the "witches" to death.

"It is very unfortunate that the Prevention of Witch (Daain) Practices Act, 1999 has been in operation since the year 1999 and the same has been adopted by the State of Jharkhand but concrete steps have not been taken to achieve the object and intent of the Act, 1999," said the division bench headed by Chief Justice Dr. Ravi Ranjan in the March 18, 2021 order.

Chhattisgarh enacted Tonahi Pratadna Nivaran Act in 2015. The legislation criminalises the declaring of any person, be it man or woman, as 'tonahi', which is used to refer to "any person or persons that will harm or possesses power to harm or thereby he intends to harm any other person or persons or society or animal or living things by black magic, evil eye or by any other means''.

The law provides for a maximum imprisonment of five years in a case where a person is found to have caused physical or mental harassment to someone identified as tonahi. It also criminalises the acts of "jhar-phook, totka, use of tantra-mantra or anything as Ojha upon any person indicated as a tonahi or any other person or animal or living thing alleged to be affected by such tonahi, under any claim of treatment or control" and provides for an imprisonment that can extend to five years.

Under the law, when a sentence of fine is imposed, the court is required to take into consideration the physical and mental damage caused to the victim including any cost of treatment.

Odisha Prevention of Witch-hunting Act, 2013 also criminalises witch-hunting or the exercise or practise of witchcraft. It also criminalises the practice of a 'witch doctor' and states that acts, that cause harm or injury to the person upon whom such practices are being performed, shall be punished with imprisonment for a term which shall not be less than one year but may extend to three years.

Last year, the Orissa High Court said the "practice is still very active in the 21st century despite science and scientific temper [having] reached its pinnacle."

In Rajasthan, a similar law is in place. The Rajasthan Prevention Of Witch-Hunting Act, 2015 however provides for harsher sentences in certain cases.

The government under the law can also impose a collective fine on inhabitants of an area when they are found in violation of the Act. Authorities can also take preventive action by declaring the area "prone to offences punishable under this Act and take necessary action for keeping the peace and good behaviour and maintenance of public order and tranquillity and may take preventive action."

A law against superstition has also been enacted in Assam. The law criminalises the action of blaming a person for "any misfortune that befalls his village/area/locality or community which may also include natural disasters, such as droughts, floods, crop loss, illness or any death in the village". It also states that a person convicted of an offence under the Act, in relation to the commission of witch hunting, shall be disqualified from inheriting the property of the person against whom such witch hunting has been committed.

The Assam Witch Hunting (Prohibition, Prevention, Protection Act, 2015 specifically provides for punishment of various forms of torture like stoning, hanging, stabbing, dragging, public beatings, burns, cutting/burning of hair, forced hair shavings, pulling of teeth out, cutting of nose or other body-parts, blackening of face, whipping, branding with hot objects or use of any other blunt or sharp weapons or objects.

Maharashtra Prevention And Eradication Of Human Sacrifice And Other In Human, Evil And Aghori Practices And Black Magic Act, 2013 was enacted in wake of the alarming number of human sacrifices and practices of black magic in the state. Similarly, Karnataka also notified a law against superstition in 2020 and banned over a dozen practices.

In Kerala, attempts have been made in the past to frame a similar law. The Kerala Prevention of Eradication of Inhuman Evil Practices, Sorcery and Black Magic Bill was submitted to the government in 2019 but it is yet to see the light of the day. According to a PTI report, the bill prescribes stringent punishment for any kind of evil practice and cheating in the name of black magic, ranging from "expelling ghost" to isolating women for menstruation and postpartum. The National Crime Record Bureau 2021 reports reveals that two cases of "child/human sacrifice" were reported from the state - almost all other states reported zero such cases.

The brutal murders of two middle-aged women in Elanthoor village again has thrown light on the gruesome practices that still prevail in the society. While commenting on the reports related to the murders, Justice Devan Ramachandran of Kerala High Court Wednesday in the courtroom said, "Some of the things happening here are beyond the limits of absurdity. Today it is human sacrifice. I wonder where Kerala is going". CPI State Secretary Kanam Rajendran also has demanded immediate bringing in of a law against superstitions.