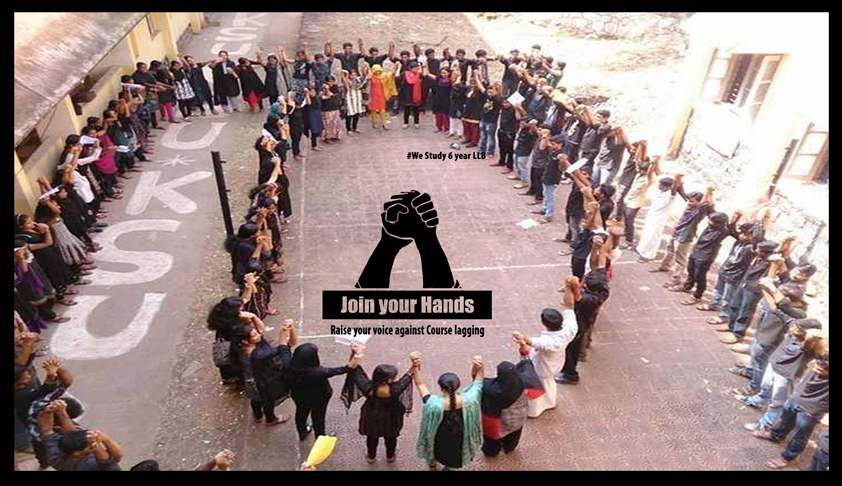 On Wednesday, around 100 students of the Government Law College, Kozhikode protested against the lagging of BA LLB and the BBA LLB (Honours) courses at various law colleges affiliated to the University of Calicut. These courses are of five years duration, but because of the course lag, they have become 6 year long courses.

Students reached the college dressed in black to participate in an agitation programme, ‘Observance of a Black Day’, organised as part of the ongoing protest.The agitation started at 1.20pm with Ajeesh Mohan, a second year law student, speaking about the agenda of the agitation and Nadeem, another law student, discussed about the rules of BCI and UGC.

The movement had started with the submission of a memorandum to the University Vice-Chancellor M. Abdul Salam in November last year. Along with the memorandum the students had also submitted a draft of a revised semester schedule. See the Live Law report here.

Live Law’s story on course lag and viral response to the lagging of their five-year course into a six-year one led to the formation of a Facebook group, ‘We study 6 year LLB,’ which has received massive support in few weeks time. ‘I am Studying 6 Years LLB,’ began to appear as a slogan of the movement on the Facebook pages of a number of law students from various law colleges, including the Government Law College, Kozhikode, affiliated to the University.

“This was in response to a call we made on our Facebook page,” says Ajeesh Mohan, a second year law student, speaking to Live Law. “The students in all government and private law colleges in Kerala are being admitted from the same entrance test. However, the students studying in the law colleges under the University of Calicut pass out almost a year after the students in other law colleges pass out,” says Ajeesh. According to him, the enrolment of students who pass out from other universities with the Bar Council also takes place almost 6-7 months earlier.

“It is ridiculous that a leading student political organization in the college has not supported this popular movement. Today's programme is not against any political party. The motive of our protest is to implement the rules recognised by Bar Council of India which are not followed by the University of Calicut”, says another law student of the University.

“It's good that you have taken this matter seriously. Only you people have for the first time in the history of the Law students of the college made a demand not to postpone the university exams”, a faculty of the Government Law College said in his Facebook post.