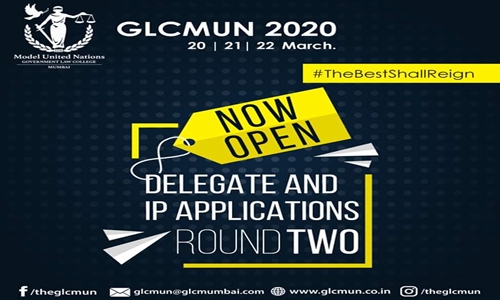 Model United Nations is an academic simulation of the United Nations wherein every participant represents a country and aims to ensure world peace through this platform. Our conferences over the past decade have seen delegates participate from all over the country and abroad. Government Law College Model United Nations is one of the oldest and most prestigious MUN conferences in the country.
The GLCMUN Society has been successfully simulating one of the biggest and largest MUN conferences for the past 11 years. This 12th Edition, we have chosen the theme as "A Global Call for a Decade of Action to Deliver the Sustainable Development Goals by 2030", furthering the mission of the Secretary General of the United Nations, Mr. Antonio Guterres who acknowledged and commended our efforts by sending us a message for the 12th Edition of GLCMUN.
The 11th Edition of GLCMUN had the privilege of hosting Mr. Salman Haider, former Indian Foreign Secretary and former India's High Commissioner to London as the Key-note speaker for the Opening Ceremony while Mr Asok Ganguly, former Judge of the Supreme Court of India, Dr. Anil Khandelwal, Author and former Chairman of Bank of Baroda and Mr. Ashwin Sanghi, an eminent Indian writer graced the Closing Ceremony.
We also Collaborate with the Teach for India Foundation to inculcate in students from the TFI classrooms diplomacy and the concept of United Nations. We promote and support the UN Women's HeForShe campaign.
The Committees and Agendas for GLCMUN'20 are as follows:
United Nations Human Rights Council (UNHRC)

· Protecting and preserving the rights and privileges of religious minorities globally.

· Cybersecurity and protection against Cyber Warfare with special emphasis on non-state actors.

· Combating proliferation of chemical and biological weapons with emphasis on the risk of acquisition by non-state actors.

· Considering the creation of a legal framework to eradicate modern slavery.

· Examining the applicability of the Geneva Convention and other international legal protocols to the treatment of civilians and non-uniformed combatants.

· Discussing ways to increase cooperation between the United Nations and regional and sub regional organizations in maintaining international peace and security.

· Ways to promote and strengthen the rule of law in the maintenance of international peace and security.

· To address taxation challenges in the current digital economy with a special emphasis on multilateralism.

· To discuss digital disruption in financial markets with a special emphasis on the emergence of cryptocurrencies.

· Discussing the disinvestment policy of the government with emphasis to the fiscal targets.

Note - Agendas will be released 15 days prior to the conference.