Letter of MLA – Is it not Contempt of Court? 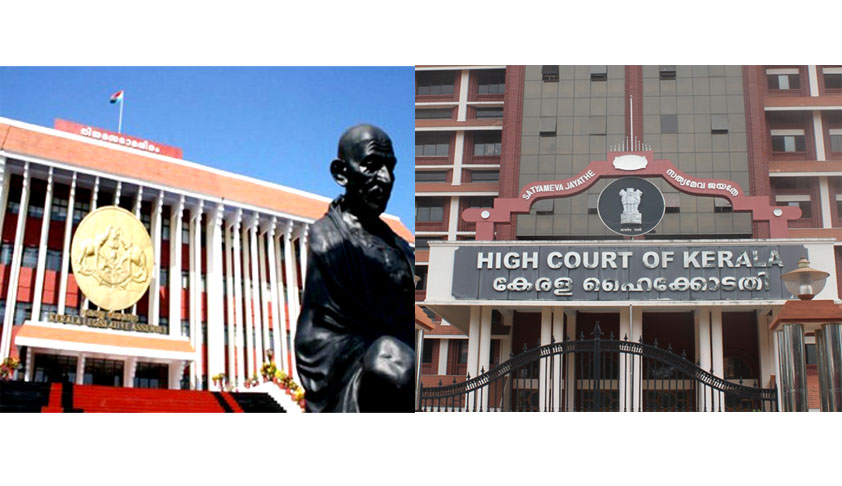 On 04/03/2014, a grave and serious incident happened in the precincts of the Supreme Court. When Sri. Subratho Roy, the Chief of Sahara Group of Companies was brought to the Supreme Court, Sri. Manoj Sharma, an Advocate positioned himself close to where Sri. Subratho Roy was to enter and threw ink on him. Though the incident appears to be trivial, it assumes importance, as it was happened in...

The very next day, Hon’ble Supreme Court comprising of Five Judges initiated suo moto contempt proceedings against the said Manoj Sharma. The Supreme Court felt that the act of the person, who threw the ink prima facie caused obstruction in the administration of justice and amounted to criminal contempt.

A more serious and grave situation arose in Kerala when our High Court pronounced judgment in the Salim Raj case. Certain observations in the judgment was picked and chosen by the media and politicians and they were having a feast. Instead of attacking the judgment, the Judge was attacked. The judgment in the case was pronounced by Justice Harun-Ul-Rashid. It is a detailed judgment, whereby, the CBI was directed to register an FIR in the controversial land grabbing case involving Salim Raj, the former gun-man of the Chief Minister of Kerala Sri. Oommen Chandy.

A complete reading of the judgment would reveal that the said remarks were required for the disposal of the case, thus vindicating its stand that a CBI investigation alone can unearth the real conspiracy in the issue. However, the judgment was spared, but not the Judge. Certain photographs, where the said Judge was having a holiday with his family and where he happened to accidently meet a politician of the opposition, was published in all the leading newspapers. The photograph is said to have been taken in 2008. Publication of such photographs not only violates the right to privacy of the persons concerned but also thrust upon false impression in the minds of the public, which is intentionally made with an ulterior motive to lower the status of judiciary.

Recently, there was allegation of corruption in the matter of construction work in the premises of Madhya Pradesh Vidhan Sabha and the Lok Ayukta took cognizance of the matter and when proceedings were about to be initiated against the Officers of the Speaker of the Madhya Pradesh Vidhan Sabha, Lok Ayukta was threatened with breach of privilege of the House, by the very same Officers aganist which action was propsed to be taken. The matter ultimately reached the Supreme Court and a Three Bench Judge of the Supreme Court in Justice Ripusudan Dayal (Retd.) and Others v. State of M. P. and Others, 2014 (1) KHC SN 35, held that Officers working in Speaker’s Office are public servants. All public servants except Speaker and Deputy Speaker of Madhya Pradesh Vidhan Sabha for the purposes of the Lokayukt Act cannot claim any privilege more than an ordinary citizen. Privileges are available only to ensure that House freely perform its functions, but do not extend to activities undertaken outside the House.

This is what happens when corruption is exposed in high offices like that of the Office of the Speaker or that of the Chief Minister. Corruption and nepotism are not alien to any power house like the Speaker’s Office or that of the Office of the Chief Minister or any Minister for that matter. When High Court formed an opinion based on facts and records before it, in the best interest of public, to alert or to warn that the Officers they appoint to aid and assist Ministers should be above corruption and they need to be more careful and cautious in choosing their personal assistants or the Officers who man their office.

What strikes one the most was the letter said to have been written by MLA Sri. T. N. Pratapan, to the Chief Justice of India, being aggrieved by the judgment of Justice Harun-Ul-Rashid. The media made a jamboree over the incident showing the extract of the letter and even the photograph of it. Such act is nothing but criminal contempt for which Court can suo motu take action against all the concerned and the media for publishing the news.

The letter, which is not only in good taste, but gives a bad message to the public at large, to the effect that, if you are aggrieved by any judgment of any Court, you can send letters to the Superior Judges alleging malice and malevolence on the Officer who delivered the judgment. The media is equally culpable, as it was giving wide publicity to the said incident, even if the MLA has done it out of his thoughtless and ludicrous sense, to get political mileage. The Hon’ble Judges of the Superior Courts are not to be taken aback, if in near future, they get such letters alleging malice and ill-will against other Presiding Officers.

Hence, suo motu contempt proceedings should be initiated against all concerned as the said act scandalises or lowers the authority of the Court and interferes in the administration of justice.

As held by Supreme Court in Rajesh Talwar and Another v. Central Bureau of Investigation and Others, 2012 KHC 4162, “The proper course would be, to assail before a Superior Court, any order which may not be to the satisfaction of the petitioners, in accordance with law.” (Para 20)

We must remember that the jurisdiction to punish for contempt touches upon two important fundamental rights of the citizen namely, the right to personal liberty and the right to freedom of expression. But, this is a case where the limits have been transgressed. If situation continues like this, the Judiciary and its system would be a place where anyone can sit on and make bad faces and say derogatory and defamatory remark about the Presiding Officers, if they get an unfavourable order or judgment.

Hence, our Courts also have to be proactive like what the Supreme Court has done in the ‘ink throwing incident’ and give a gentle alert that there are lines, if transgressed, would amount to interference in the administration of justice. Hence, beware!!!