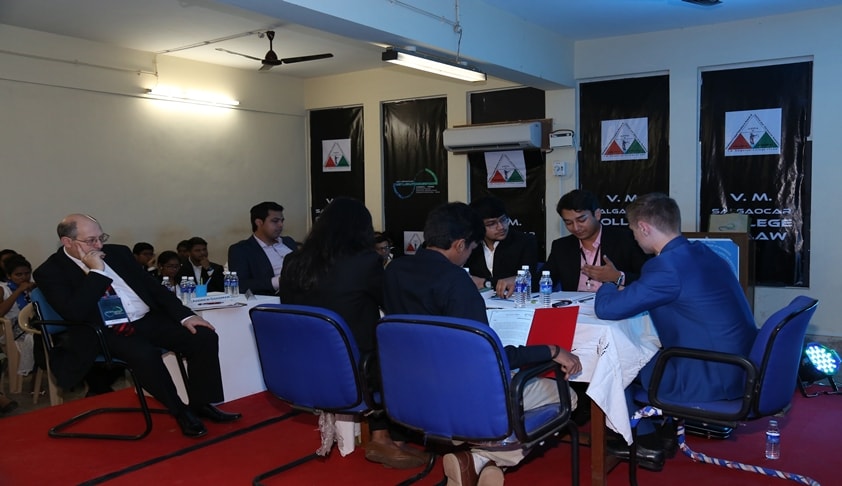 The VMSCL-WMO International Dispute Resolution Competition is to be held from the 11th to the 14th of January 2017. The competition is a part of a larger project, Lex Infinitum. The project is the result of collaboration between V. M. Salgaocar College of Law and World Mediation Organisation, Berlin.The competition will be an amalgamation of intense mock mediation sessions coupled...

The VMSCL-WMO International Dispute Resolution Competition is to be held from the 11th to the 14th of January 2017. The competition is a part of a larger project, Lex Infinitum. The project is the result of collaboration between V. M. Salgaocar College of Law and World Mediation Organisation, Berlin.

The competition will be an amalgamation of intense mock mediation sessions coupled with engaging socials, to help ADR aspirants and veterans engage in discussions and build strong bonds. The competition will see a total of 24 teams, resolving disputes drafted by a Problem Drafting Committee that involves experts from a variety of countries and law backgrounds. The teams will be judged by a panel of 32 experts representing countries like India, Germany, America, Austria, Australia, etc. thus providing students a broader perspective on mediation as a tool for conflict resolution.  The competition will be preceded by a negotiation and mediation workshop, conducted by the attending experts, which will ensure that everyone is on a level playing field and has perfected their mediation and negotiation skills. Each team will comprise of a negotiating pair and a mediator each of whom will be judged separately leading to a winner in both the fields and an overall winner for excelling in the entire competition. The competition will advance from the preliminary rounds to the semifinals and then the finals over a span of 3 days.

Lex Infinitum is aimed at inculcating Alternate dispute resolution skills and techniques among students from across the globe. The VMSCL-WMO International Dispute Resolution Competition, 2016 drew 20 teams and a diverse group of individuals from the field of ADR as experts who participated in the event from India and abroad in its inception year. The competition also witnessed an all-girl team from the American University of Afghanistan. The organizing team worked hard to achieve a pan Indian participation and had a team from Kashmir University participate as well. In the end Jagiellonian University, Poland emerged victorious last year.
The Competition strives to promote the spirit of consensual dispute resolution among aspiring law graduates and create awareness in the society about the options available to them to resolve their disputes.

Apart from the competition, knowledge sessions will be conducted simultaneously which involve lectures and interactive sessions for registered delegates. The delegate registration allows ADR enthusiasts from myriad fields to access information which will help them understand the nuances of the ADR system. The sessions will deal with the basics of mediation and negotiation and then advance into specific fields where mediation plays a pivotal role. The knowledge sessions were conceptualized to further the cause of the Lex Infinitum project not only among the legal fraternity but among all members of the society and professionals who wish to learn about ADR.

The event will be held across multiple venues with most of the rounds happening within the campus premises and the socials will be spread out across the state so that the participants can enjoy the cornucopia that Goa is.

M. Salgaocar College of Law and the Lex Infinitum Organizing team has put together a series of experiences that will leave a lasting impression on every Lex Infinitum alumni.