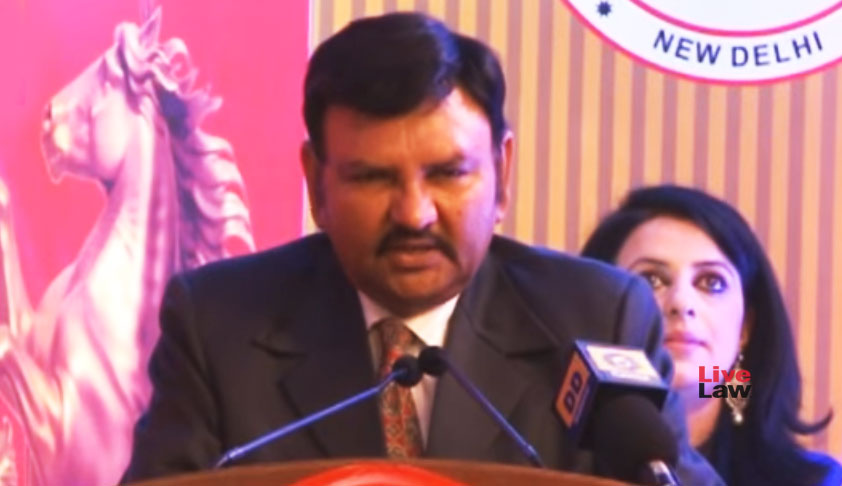 A Delhi Court on Saturday restrained all media houses from publishing any news on the FIR filed by the Central Bureau of Investigation (CBI) against former Orissa High Court Judge I.M. Qudussi in relation to the medical college bribery scam. The order will be effective until the police completes its investigation or till further Court orders, whichever is earlier."...by way of this...

A Delhi Court on Saturday restrained all media houses from publishing any news on the FIR filed by the Central Bureau of Investigation (CBI) against former Orissa High Court Judge I.M. Qudussi in relation to the medical college bribery scam. The order will be effective until the police completes its investigation or till further Court orders, whichever is earlier.

"...by way of this temporary injunction order, defendants no. 1 to 4 and through defendant no. 6 Union of India and its various Ministries, Departments, councils, regulatory authorities set up by Union of India, all the media houses whether print or electronic or internet, and their associates are hereby restrained from publishing, re-publishing, repeating any article or rightups, or telecasting or re-telecasting any programmes or debates or interviews or opinions or reports or off shoot reports or publicizing in any other manner, directly or indirectly, pertaining to FIR bearing no. RC 10(A)/AC-III/2017/New Delhi dated 19.09.2017 registered at PS CBI New Delhi, till the time police completes its investigation and files appropriate report before the Court or till further orders, whichever is earlier," Judge Twinkle Wadhwa ordered, while clarifying that media houses are free to report on any Court proceedings pertaining to the FIR.

The Court was hearing a Petition filed by Mr. Qudussi, who referred to an article published by The Wire on 15 January. The Article alleged that transcripts of purported conversations between the three accused persons – Mr. I.M. Qudussi, middleman Vishwanath Agarwala and B.P. Yadav of the Prasad Education Trust – in the medical college bribery scam revealed that college officials had, in fact, planned to bribe senior functionaries of the Supreme Court and the Allahabad High Court in return for a favorable judgment.

TOI article titled “Bribery Charges against judiciary in med college scam intensify as CBI transcripts reveal talk of ‘prasad’ and ‘temples’” had also been referred to, along with a similar article published by ABP News.

The Petition had then pointed out that the media houses claim to have obtained a copy of the CBI's Preliminary Enquiry report, a copy of which is not even handed over to the accused at any stage of the trial. It had therefore contended that the conduct of these media houses has been "reckless and irresponsible", and that the publications were a "concerted attempt" to malign the entire judicial institution.

Considering the submissions, the Court at the outset, noted that since only FIR had been filed in the case, the matter was not sub-judice, and hence, the Court had the authority to grant an injunction.

It then rejected the plea of truth, justification and fair comment as taken by the defendant media houses, asserting that none of the media houses claimed to have untempered copies of the recording. It observed,

"When the genuineness, authenticity and source of the tape recordings is not explained by defendants, can the reporting be called a truth and fair comment especially in the way it has been done in the present case. No one knows about the authenticity or source of these tapes with media houses. This further raises doubt on the defence taken by the media houses of truth justification and fair comment...

...Rather it appears that in a fist of excitement, the article and contends of tapes were published by defendants without even making effort to assess the source of the recordings and despite knowing the fact that their authenticity is yet to be proved in a Court of law."

Judge Wadhwa went on to opine that the publications did amount to "adverse excessive publicity" for Mr. Qudussi and that there existed a "real and tangible risk to the plaintiff in not getting fair trial and open justice".

She specifically focused on Mr. Qudussi being a former Judge and observed, "If some allegations are casted on a retired member of judiciary especially constitutional courts, the publicity has to be handled with care and caution as the damage caused to the reputation of such a person is irreversible to his reputation. Such loss of faith results in bad repute for the person and for the justice system as a whole. "

The Court then opined that the publications were prima facie defamatory, and would lead to obstruction of justice. It further observed that irreparable loss would be caused to Mr. Qudussi if an injunction order wasn't passed against the media, and therefore allowed the Petition.