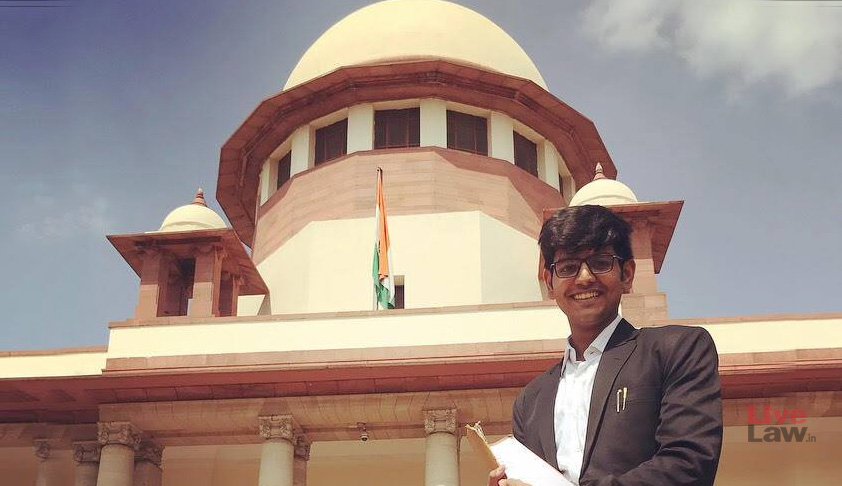 The Supreme Court on Wednesday, September 26, finally paved way for live streaming of court proceedings, providing “virtual access to courtroom proceedings as they unfold”. The streaming will begin with cases of constitutional and national importance, barring those involving juveniles, cases of sexual assault, matrimonial issues, being argued for final hearing before the Constitution Bench. While Swapnil, Aman and Aishwarya are in their final year of college, Ayush and Byron are in the 4th year of their law course. Swapnil was one of the first petitioners in the case, and Aman, Byron, Ayush and Ashwariya joined in through Intervention Applications in July this year. All five of them appeared as parties-in-person.

Swapnil tells us that it was during his internship with Advocate Rishabh Sancheti that the idea of approaching the court first took seed in his mind. He recalls that during this time, he had worked on certain matters of Constitutional importance which were to be heard in the Supreme Court. However, these were listed on Miscellaneous days, and due to the ban on granting interns entry to the Court on the said days, he could not attend any of the hearings.

Disappointed, he spoke about the unfairness of the entire scenario to Mr. Sancheti, who then suggested that if he felt so strongly about it, he must challenge it.

“The idea stayed at the back of my mind for a long while and one day during my vacations, I decided to act upon it and ended up drafting and filing the petition by myself,” he tells me.

The motivation for seeking impleadment in the case was quite similar for Aman, Byron, Ayush and Ashwariya as well. All four of them spoke about the importance of learning by witnessing court proceedings—a lesson they missed out on several times either due to the ban on interns on Miscellaneous days or due to over-crowding of courtrooms during important hearings.

Another common thread running through their experience has been the support showered on these students by not just their seniors but also by the court staff.

“In all honesty my experience throughout this case has been great. Given that I am still a law student, I lacked the knowledge about the nuances of the procedure of filing matters in the Court. However, I cannot thank enough the supportive and ever co-operative staff at the Supreme Court, who made my journey a lot less cumbersome!” Swapnil recollects.

Post filing, the next hurdle was appearing before the court—an experience that can be truly daunting, even for young lawyers. Them being law students made the task nerve-wrecking. However, all of them were grateful for the constant encouragement showered on them by the judges as well as by stalwarts like Attorney General K.K. Venugopal and Senior Advocate Indira Jaising.

Swapnil’s contribution was in fact acknowledged by Justice Chandrachud at the end of his concurring opinion as well. Visibly elated by the support, he said, “When the matter came up for the admission hearing, I was nervous as I had to argue myself in the Hon’ble Chief Justice’s Court due to the fact that I had not engaged an advocate and was appearing in person. However, the Hon’ble Judges were extremely warm and put me at ease, almost immediately. It was a daunting experience arguing next to stalwarts like Attorney General K.K. Venugopal and Ms. Indira Jai Singh, but both of them were encouraging and supportive of my effort throughout…

…I would like to thank my parents, who were encouraging throughout while I made frequent trips from Jodhpur to Delhi to attend the hearings; my mentor Mr. Rishabh Sancheti, for guiding me always; my friend Chandni Ghatak for her support and my University (National Law University, Jodhpur) who allowed me to argue this petition while managing my academics.”

All five of them now welcome the decision, hoping to be able to taste the fruits of their efforts. Swapnil especially rejoiced at the fact that his suggestion for a separate live-streaming room within the court premises found favour with the Supreme Court Bench.

“Having seen the actual Court proceedings myself, I realize now that overcrowding of the Court is a serious concern and hence, a balance of interests was necessary. The judgment balances the two interests (i.e. of the Court administration & of the interns) in a manner which leaves neither party is at loss. I am extremely grateful that the Court found merit in my suggestion of establishing a live streaming room in the Court premises for interns to sit and watch the proceedings in,” he said.

Aman, Byron, Ayush and Ashwariya also chimed in, in a joint statement, “We are immensely happy that there was a unanimous decision taken by the Hon’ble Judges of the Supreme Court as it can be taken as golden opportunity for upcoming law aspirants to take advantage of witnessing the way stalwarts of the legal profession argue before the highest temple of justice in India.

Also, as Hon’ble Justice D.Y Chandrachud pointed out, “sunlight is the best disinfectant”, the move will surely haul the current system to become more transparent and limpid.”

The four of them now intend on pursuing litigation or joining the judiciary. They also want to play a proactive role in filing public interest litigations before the courts, and assist in pro-bono work. Their first being a momentous decision in the Supreme Court’s history would definitely function as a catalyst and motivator not just for them but also for other law students throughout the country. It is lawyers like them that carry the torch for dynamic growth of the entire legal profession.