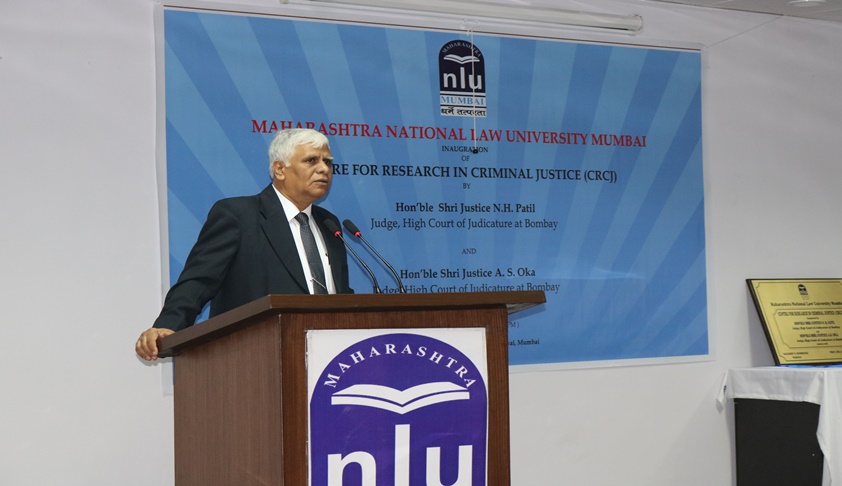 Justice NH Patil and Justice AS Oka, judges of High Court of Judicature at Bombay, inaugurated the Centre for Research in Criminal Justice (CRCJ) on Saturday at the Maharashtra National Law University (MNLU) Mumbai. The CRCJ is an initiative of the university to improve research in criminal justice administration and to make a quality contribution towards an efficient criminal justice administration through the active participation of students, judiciary, civil society members and other relevant stakeholders. The centre was inaugurated by.

In the welcome address, Prof BP Panda, Vice-Chancellor of MNLU Mumbai and director of CRCJ, highlighted the present status of the criminal justice system in India and role of the CRCJ towards a quality research and, hence, betterment of criminal justice administration.

Chief guest Justice NH Patil dealt with the lack of proper investigation procedure in criminal investigations in India and its adverse consequence on criminal justice administration. He emphasised on the need to have a proper scientific investigation mechanism in place so as to deal with the prosecution of criminal cases effectively. He proposed certain areas of research within the realm of criminal administration system that could be undertaken by the CRCJ, including the existing flaws in criminal investigation system, hindrances in fair and efficient trials, prison reforms systems, role of media in sensitive criminal cases and role of public prosecutors.

Ashutosh Kumbhakoni (Advocate General, Maharashtra) emphasised the role of society, the principle stakeholder in criminal justice towards achieving an efficient criminal justice administration. He also extended certain suggestions and mechanisms to be adopted by the CRCJ in terms of efficient and qualitative contribution towards its enshrined objectives.

Justice Oka highlighted the objective behind establishing NLUs across India and the role of CRCJ towards attaining that objective. He further urged the dignitaries present to extend all possible support and cooperation to make the CRCJ a success.

The inaugural session concluded with a vote of thanks by Sadashiv S Deshmukh (Registrar, MNLU Mumbai). A roundtable on Challenges to Criminal Justice Administration in Maharashtra was held after the event, wherein the members of the judiciary, the bar and academia participated.