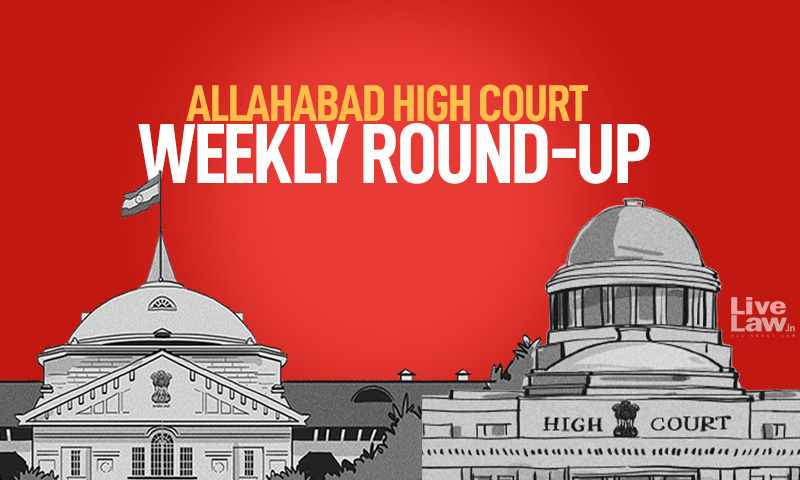 Wajid Advocate Alias Wajid Khan And Another v. State Of U.P. And Another 2022 LiveLaw (AB) 346

The Allahabad High Court (Lucknow bench) quashed a criminal case against four real brothers, and their father, aged around 81 years who were booked for allegedly gang-raping a married woman, having two grown-up children

The bench of Justice Dinesh Kumar Singh observed that it was not believable that four real brothers and their father would commit rape on a woman having two grown-up children.

The Allahabad High Court has observed that the relevant date for the purpose of computing the period of limitation under Section 468 CrPC is the date of filing of the complaint or the date of institution of prosecution and not the date on which the Magistrate takes cognizance of the offence.

It may be noted that 'institution of prosecution' would refer to the date of filing of the complaint or registering of the FIR [vide Darshan Singh Saini Vs. Sohan Singh and another (2015) 14 SCC 570 & Johnson Alexander Vs. State by CBI Cri. Appeal 1478 of 2010]

It was specifically observed by the bench of Justice Sameer Jain that the relevant date for the purpose of computing the period of limitation under Section 468 Cr.P.C. is the date of filing of the complaint or the date of institution of prosecution and not the date on which the Magistrate takes cognizance.

Denying bail to Ashish Mishra, the prime accused in the Lakhimpur Kheri Violence case, the Allahabad High Court today pointed toward the recent trend in media to conduct ill-informed and agenda-driven debates. The Court also said that the media has been overstepping upon the sanctity of the judiciary in high-profile criminal cases.

Speaking about media trials, the Court said that such trials take up the investigation on its own, leading to forming public opinion against a suspect, even before the court takes cognizance of the case.

As a result, the Court said, the accused who should have been presumed innocent is treated as a criminal and added that this problem has been multiplied by electronic and social media, especially with tool kits. Further, the Court also blamed the media for running Kangaroo Courts.

Apart from this, the Court also added that of late, the media is seen overstepping upon the sanctity of the judiciary in high-profile criminal cases, as was evident in the cases of Jessica Lal, Indrani Mukherjee, and Aarushi Talwar, etc.

The Bench of Justice Krishan Pahal further remarked that the media is supposed to provide news to society, but sometimes, individual views are overshadowing the news thus putting an adverse effect on truth.

The Allahabad High Court directed the Uttar Pradesh Government to consider giving employment of one of the family members of the Hathras Gang rape Victim under the Government or Government Undertaking commensurate with the qualification possessed by them.

The bench of Justice Rajan Roy and Justice Jaspreet Singh further directed the government to consider their relocation to any other place within the State outside Hathras keeping in mind their social and economic rehabilitation and also the educational needs of the children.

The Allahabad High Court has observed that even a minor has a right to keep her person and even the parents cannot compel the detention of a minor against her will unless there is some other reason for it.

The bench of Justice Sanjay Kumar Singh observed thus while granting the custody of minor victim (in connection with a case under Sections 363 and 366 IPC) to her mother after ascertaining the minor's wishes.

The Allahabad High Court dismissed a revision plea seeking registration of a First Information Report (FIR) against Union Minister Smriti Irani and two others alleging that they had demanded ₹25 lakh to appoint the Revisionist as a member of the National Commission for Women (NCW).

The bench of Justice Dinesh Kumar Singh was essentially dealing with the revision plea filed by an international shooter Vartika Singh who claimed in her plea that she was asked to pay ₹25 lakh as a bribe for confirming her appointment as a member of the NCW.

The Allahabad High Court has observed that to prosecute a person for an offence committed under Section 3(2)(v) of the SC/ST Act, there must be evidence to show that the accused committed on the ground that such person/victim is a member of a Scheduled Caste or a Scheduled Tribe.

Essentially, the Bench of Justice Kaushal Jayendra Thaker and Justice Ajai Tyagi was dealing with a criminal appeal filed by one Pintu Gupta challenging the judgment and order dated passed by IIIrd Additional Sessions Judge, Jaunpur convicting accused-appellant, Pintu Gupta, under Sections 326 of IPC and Section 3 (2) (v) of SC/ST Act, 1989.

The bench of Justice Raj Beer Singh granted bail to 68-year-old Wajid Khan (having 40 years of practice experience as an advocate). The Court also granted bail to another advocate who is 60 years old.

Essentially, the applicants are facing multiple FIRs in connection with an incident that took place on December 2, 2019, accusing them of leading a mob comprising about 250-300 persons, who were armed with lathi sticks and rods and who damaged vehicles lying parked at the side of the road and they also assaulted the public servants.

Irony That We Celebrate Women's Rights In All Spheres But Show Little Concern For Her Honour: Allahabad HC On Increasing Rape Cases

"...crime against women in general and rape, in particular, is on the increase. It is an irony that while we are celebrating women's rights in all spheres, we show little or no concern for her honor. It is a sad reflection on the attitude of indifference of the society towards the violation of human dignity of the victims of sex crimes," remarked Allahabad High Court.

The bench of Justice Sanjay Kumar Singh observed thus as it denied bail to one Ayyub Khan @ Guddu (accused/appellant) who had moved the High Court challenging the order of the Special Judge, SC/ST Act, Auraiya denying him bail in a case wherein he has been accused of committing rape against a woman and also making her nude video.

The Allahabad High Court granted bail to an accused who was in continued judicial custody for more than 150 days. DGGI alleged that the accused formed 75 fake firms and prepared fake documents/invoices evidencing financial transactions between various parties without actual movement of goods; and as a sequel thereof, input tax credit of Rs. 5,28,91,94,250/- (Rupees Five Hundred Twenty Eight Crores Ninety One Lakh Ninety Four Thousand Two Hundred Fifty only) has been passed on to various buyers.

UPDATES FROM THE WEEK

The Allahabad High Court granted bail to a murder accused as it noted that 13 years of incarceration without conclusion of the trial had violated his fundamental right to a speedy trial.

The bench of Justice Ajay Bhanot was dealing with the 4th bail application of the murder accused (Mahesh Chandra Shukla) seeking his release on bail in a criminal case under Sections 302, 307, 323, 504, 506 IPC, and Section 7 of the Criminal Law Amendment Act.

Section 14A Of SC/ST Act Contains No Limitation Period To Bar Filing Of Appeal Against Order Under 1989 Act: Allahabad High Court

Case title - Ghulam Rasool Khan and others v. State of U.P. and others

The Allahabad High Court has observed that Section 14A of SC/ST (Prevention of Atrocities) Act, 1989 puts no limitation on filing an appeal against an order under the provisions of the 1989 Act.

The Bench of Chief Justice Rajesh Bindal, Justice Ajai Kumar Srivastava-I and Justice Saurabh Lavania clarified that after the Allahabad High Court struck down the second proviso to sub-section(3) of Section14A of the 1989 Act In Re : Provision of Section 14A of SC/ST (Prevention of Atrocities) Amendment Act, 2015, there is no limitation to file an appeal against an order under the provisions of 1989 Act.