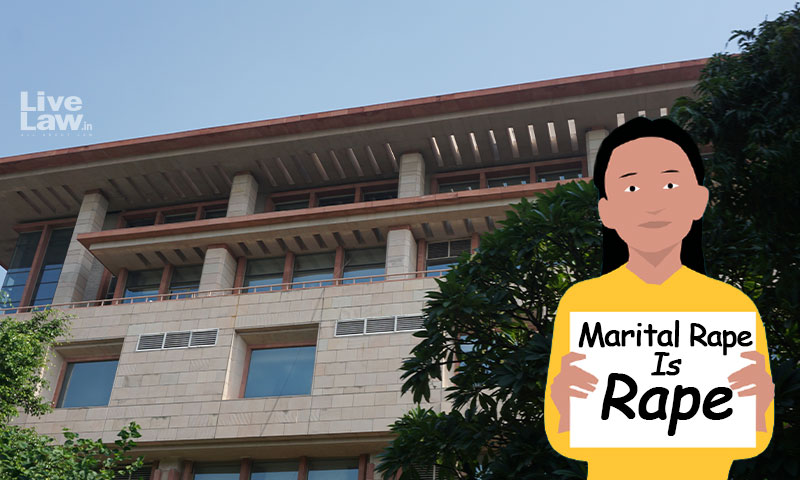 The Delhi High Court on Wednesday continued hearing a batch of petitions challenging the exception to Section 375 of the Indian Penal Code, which exempts forceful sexual intercourse by a man with his own wife from the offence of rape, provided the wife is above 15 years of age.Senior Advocate Rajshekhar Rao, appearing as amicus curiae in the matter, told a bench comprising of Justice...

The Delhi High Court on Wednesday continued hearing a batch of petitions challenging the exception to Section 375 of the Indian Penal Code, which exempts forceful sexual intercourse by a man with his own wife from the offence of rape, provided the wife is above 15 years of age.

"... a woman is better off, as a matter of law, when she is assaulted by a stranger. But when her loved one assaults her, the law says, she is not entitled to call that act rape."

Rao added that in the context of rape, while the Courts have repeatedly said that it dehumanizes the very existence of a woman, he argued that the question which needs to be asked is whether the Court should sit by and watch a provision which aids in the possibility of a woman being dehumanised every day.

"...everyday this act remains in the books, there is a section in the population which is denied the opportunity to call a rape as rape," Rao submitted.

He added "No amount of telling a woman that she can prosecute the husband under 10 other provisions of law, can undo the inability that she faces because she is violated by the person who is supposed to be her companion, her husband, her partner, a person who is in the fiduciary capacity."

On reading Section 376(2) and 376C of the IPC, Rao submitted that the law places a premium on relationships and greater responsibility on someone having a fiduciary relationship.

Pertinently, Section 376(2) prescribes harsher punishment for a man, who, having a fiduciary relationship with a woman, rapes her. Similarly, Section 376C criminalizes rape by a man in authority.

Rao also gave an example dividing the relationship of a couple into three stages; courtship, engagement and separation.

"The same couple at three stages of the relationship. During the course of courtship, if the man, forces himself on the woman, he violates the law. He violates the law at all stages but at the stage of Section 375 and 376, he clearly is guilty of an offence. Consider a situation, courtship is translated into engagement. There is a further formalization of the relationship. Yet if the man forces himself upon the same girl, he still commits an offence. Five minutes before marriage if the act occurs, it's an offence. Five minutes after marriage, the act is not an offence. The woman doesn't have recourse to prosecute the man for that act. She has the ability to prosecute him under various other provisions of the law but she cannot call it a rape anymore," Rao argued.

"The next stage is, after a few years, she decides she is no longer interested in the relationship but doesn't want to opt-out as yet, and tries and live separately for some time. But doesn't have the means to step out of the house, sleeps on the same bed but has made it clear that they are living separately. Section 376B gives her the right suddenly again to prosecute for the act of rape but it is slightly reduced to the act done before marriage."

"For example, trust in a case where chowkidar in school, teacher or student etc., these are one category of trust. Can you say that it's something which is similar to trust existing between husband and wife in a sexual relationship? You will have to answer this," Justice Hari Shankar orally remarked.

Justice Hari Shankar pointed out in cases of fiduciary relationships like teacher-student, there is no expectation of sexual relations.

"We are concerned with whether this act should be punished as rape. It's not that the legislature was of the view that it shouldn't be criminally punished. But legislature had taken a decision that it shouldn't be treated as rape. If we are to strike it down, we have to come into a qualitative decision, that this act should additionally be categorized as rape...if we can't equate these two situations, then to what extent we can strike it down…We will need your assistance in this", the judge continued.

Apart from the submissions made by amicus curiae, the Court also heard two intervenors opposing the batch of petitions.

Advocate Raj Kapoor appearing for one of the intervenors submitted before the Court that the Parliament through debates and considering the overall view of Indian society, statutes and punishment, retained exception 2 to Section 375 of IPC.

Reading out his written note before the bench, Kapoor added that the necessity of a legislative Act is an aspect only for the determination of legislative authority.

Further arguments made on behalf of Kapoor were:

- In a case of judicial separation, both the partners are physically as well as mentally separate from each other. The wife's consent for sexual relationship stands withdrawn from the date of separation. Therefore, it cannot be said that retaining the exception amounts to violation of Article 14 which permits reasonable classification based on nexus with the object sought to be achieved.

- It cannot be said that under the Domestic Violence Act the punishment provided is not sufficient, and therefore Exception 2 should be struck down, and husband should suffer the same punishment as in the case of other grave offences under section 375 IPC.

- India need not copy-paste western concepts or trends of other countries. Concept of western countries cannot be used for striking down a statutory provision.

Hearing the aforesaid, Justice Shakdher remarked thus "Problem here is when two people live under the same roof as husband wife, the offence of rape is firewalled because of the exception. If there was no such relationship, he would have been amenable to prosecution as any other person."

Submissions were also put forth by Ritwik Bisaria, an engineer by profession, appearing for Men Welfare Trust. He argued that various international and domestic judgments cited by the petitioners cannot be supported, highlighting relevant portions from them.

On the aspect of constitutionality, Bisaria argued that in Article 15, which prohibits discrimination on three parameters, since marital status is not part of the prohibition, an Exception based on the same cannot be called unconstitutional.

"In Art. 14, there is ample protection under other laws available to wife. Equality within the same law is not mandated under Art. 14," he added.

During the course of the hearing, the bench also said that it has also appointed Senior Advocate Rebecca John as an amicus curiae in the matter and that formal orders will be passed for the same.

Yesterday, the Delhi Government submitted that the exception to Section 375 of IPC pertaining to non-criminalization of marital rape does not leave a married woman remediless pursuant to forced sexual intercourse by her husband. It also submitted that the exception does not compel a wife to have sexual intercourse with the husband and that the remedy of divorce, including other remedies under the criminal law, is available to her in such situations.

Earlier, two of the petitioners namely RIT Foundation and All India Democratic Women's Association (AIDWA) told the Court that the marital rape exception provided under Section 375 of Indian Penal Code violates a woman's right to dignity, personal and sexual autonomy and her right to self expression enshrined under the Constitution of India.

Previously, Senior Advocate Colin Gonsalves appearing for one of the petitioners argued that marital rape is the biggest form of sexual violence against women which is never reported, analyzed or studied.