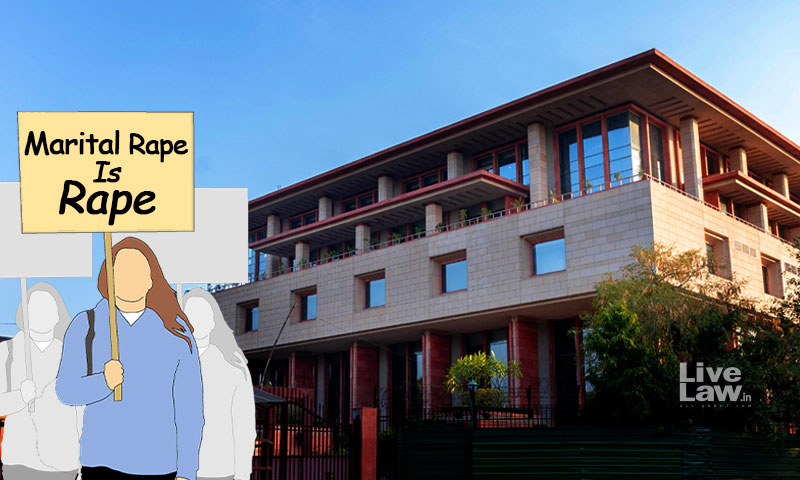 x
The exception to Section 375 does not violate the right to privacy, dignity of married women, the counsel added.

The Delhi Government on Tuesday told the Delhi High Court that the exception to Section 375 of IPC pertaining to non-criminalization of marital rape does not leave a married woman remediless pursuant to forced sexual intercourse by her husband.Advocate Nandita Rao submitted that the exception does not compel a wife to have sexual intercourse with the husband and that the remedy of...

The Delhi Government on Tuesday told the Delhi High Court that the exception to Section 375 of IPC pertaining to non-criminalization of marital rape does not leave a married woman remediless pursuant to forced sexual intercourse by her husband.

Advocate Nandita Rao submitted that the exception does not compel a wife to have sexual intercourse with the husband and that the remedy of divorce, including other remedies under the criminal law, is available to her in such situations.

A bench comprising Justice Rajiv Shakdher and Justice C Hari Shankar was hearing a batch of petitions challenging the exception to Section 375 of the Indian Penal Code, which exempts sexual intercourse by a man with his own wife from the offence of rape, provided the wife is above 15 years of age.

"There is no dispute that a woman has right to bodily integrity, she has a right to say no. Just because this is not a criminal offence under Sections 375, does that create a compulsion on a woman to have sex with her husband? The answer is no," Rao submitted before the Court.

She added "She has a remedy to have divorce under the ground of cruelty. This is under Hindu and Muslim law. She also has a right to register a criminal case under Section 498A IPC. As of today, FIRs are registered by the spouses under Section 377, 498A and 326 of IPC."

The Bench also heard Advocate Raghav Awasthi on behalf of one of the Petitioners.

Advocate Awasthi argued that non-criminalization of marital rape is a violation of Article 21. He pointed out that marital rape is a punishable offence in various jurisdictions, including in Pakistan. He relied on a case of Edgar Jumawan (2014) where the Supreme Court of Philippines relied on the Convention on the Elimination of All Forms of Discrimination Against Women and UN Declaration on the Elimination of Violence against Women, and criminalized marital rape.

He highlighted that India is also a signatory to the said conventions and argued that in case there is vaccum in national legislation, it can be filled by international treaty obligations.

This argument was however dismissed by Justice Shakhder, stating that there is no vacuum in India. "We have Vishakha judgment, Bank of Kochi, etc."

Rao argued that while there can be a doubt on the issue in the minds of various courts or investigation agencies, however, she added that unless it is decided that the exception to Section 375 denies a woman the right of divorce or other prosecutions, it cannot be said that it's existence in the penal code violates her rights under Article 21 or compels her to have sexual intercourse with her husband.

"The exception to Section 375 does not violate the admitted right to privacy, dignity or the right to refuse sex in or out of marriage because there is no compulsion on a woman and she is not remediless," Rao added.

At this juncture, Justice Rajiv Shakdher what is the remedy in case a man forces himself on his wife, despite her refusing to have sexual intercourse.

"You're saying that she can go and seek divorce on the ground that she doesn't want to cohabitate. That is not the point. The point is an offence has taken place. The exception created a firewall. Is that firewall justifiable on the test of Article 14 and 21, it is only that particular narrow aspect that we have look into," the Judge said orally.

Responding to the aforesaid, Rao submitted that the existence of the exception to Section 375 does not take away a woman's right to say no in a marriage.

Hearing the response, Justice Shakdher inquired, "You are saying that if she says no and the husband says okay fine thank you then nothing happens? But what happens if she says no and he still imposes himself? An FIR can be filed under Section 326. The point is Section 326 will get attracted along with Section 375 no, in such a grave case."

This, she submitted, is because whereas the psychological and physical impact of rape is same on both married and unmarried women, however, the social and economic impact is different. "If there will be an offspring from a live in partner and a stranger from rape, that child will not have a status of a legitimate child which under the presumption of Section 113 of Indian Evidence Act…to meet the threshold of Article 14, it has to be shown that there is a difference between a wife and someone who is not a wife," Rao submitted.

The Court then inquired would it be an offence in case a man forces himself on a wife who is on her menstrual cycle. Rao responded that while the aforesaid act will be an offence, the same cannot be covered under Section 375 of IPC.

Justice Shakdher then remarked "If for a live partner who is suffering from menstrual cycle, she says no, it's an offence. The rationale and the thrust is Relationship cannot put it on a different pedestal. A woman remains a woman. You can show us the section but jurisdiction after jurisdiction, it has been held that merely because you're married, it's not a good enough to say that it is not an offence. You are trying to persuade us that because she is married, she can take recourse to other laws, she can take recourse to that but can't call him out for rape under Section 375, that's the sum and substance of your argument, correct?"

Rao further argued that the exception of Section 375 is not making the sexual intercourse lawful in any manner. However, it is just not criminalizing the act under Section 375.

"Sexual assault may be an offence under other provisions but Section 375 is not an offence for the group of citizenry defined as husbands. So, if your lordships strike off the exception, you will be creating a new offence. The Supreme Court has been reluctant to do so," she argued.

It was further submitted that the Constitutional scheme does not permit the judiciary to create offences because it will be an onslaught on freedom of citizens under Article 21 as the courts do not have the machinery of the legislature.

At this juncture, Justice Hari Shankar remarked "I don't  think this a very sound argument...what is under challenge is statutory provision, court always has power to strike off a provision."

The bench clarified that it was only testing the vires of a provision in a sense that is creating an exception from an offence and not on the aspect of creating a new offence.

"If your lordships come to a conclusion that this exception is violative of Article 21, you will have to strike down Section 375. If you strike down only exception, it will be creation of new law without remedy because there is no remedy for husbands under Section 375," Rao responded.

Yesterday, two of the petitioners namely RIT Foundation and All India Democratic Women's Association (AIDWA) told the Court that the marital rape exception provided under Section 375 of Indian Penal Code violates a woman's right to dignity, personal and sexual autonomy and her right to self expression enshrined under the Constitution of India.

Previously, Senior Advocate Colin Gonsalves appearing for one of the petitioners argued that marital rape is the biggest form of sexual violence against women which is never reported, analyzed or studied.