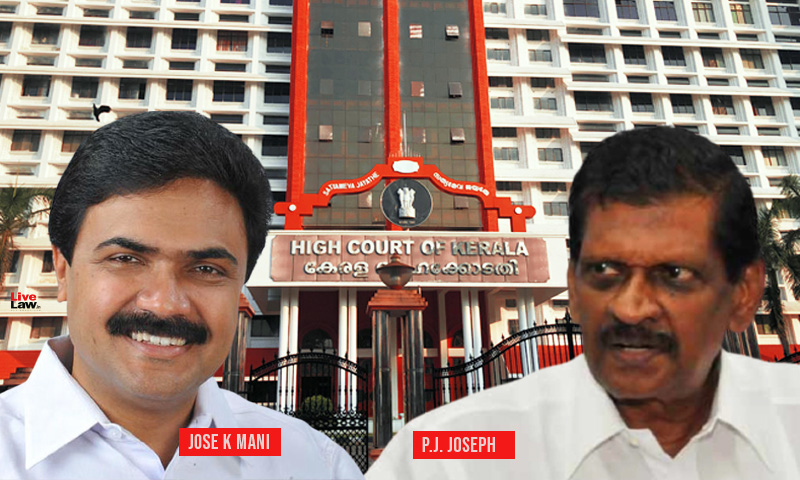 The Kerala High Court has upheld the order of the Election Commission of India to allot the party symbol 'two-leaves' to Rajya Sabha MP Jose K Mani-led faction of the Kerala Congress(Mani) party.A single bench of Justice N Nagaresh dismissed the writ petition filed by P J Joseph MLA, the leader of the rival section of KC(M), challenging the ECI order.The High Court dismissed the legal...

The Kerala High Court has upheld the order of the Election Commission of India to allot the party symbol 'two-leaves' to Rajya Sabha MP Jose K Mani-led faction of the Kerala Congress(Mani) party.

A single bench of Justice N Nagaresh dismissed the writ petition filed by P J Joseph MLA, the leader of the rival section of KC(M), challenging the ECI order.

The High Court dismissed the legal argument raised by the lawyers of P J Joseph that the Election Commission had no power to determine the disputes over election symbol.

The contention was that after the the 91st Constitutional Amendment Act, 2003, the concept of "split" within a political party has been omitted from the tenth schedule and the Election Commission therefore has no jurisdiction to look into split in legislative wing of any political party under Paragraph 15 of the Elections Symbols Order, 1968. It was argued that after the 91st Amendment Act, 2003, no elected member belonging to a party can approach Election Commission claiming that there is a split in the party and he belongs to one group, which should be recognised by the Commission.

It was further argued that the Representation of Peoples Act, 1951 was amended in 1989 to insert Section 29A giving statutory power to the Election Commission to recognize political parties. There is no mention of allotment of party symbol under this section. Therefore, it was contended that with the enactment of Section 29A,  the powers under Paragraph 15 of the Symbols Order(which is framed under the plenary powers of the ECI) to settle dispute over symbol between rival factions of a party became redundant.

Referring to SC precedents, the High Court observed that the Election Commission has plenary powers under Article 324 of the Constitution to decide on the allotment of symbols.

"If the Commission is not to be disabled from exercising effectively the plenary powers vested in it in the matter of allotment of symbols and for issuing directions in connection therewith, it is plainly essential that the Commission should have the power to settle a dispute in case claim for the allotment of the symbols of a political party is made by two rival claimants", the Court observed.

The Court noted that even after the 2003 amendment to the tenth schedule of the Constitution, the Supreme Court has delivered judgments upholding the power of the ECI to settle disputes over symbols. The Court refererred to the 2019 decision of the Supreme Court in the dispute over party symbol of AIADMK between Dinakaran and Palaniswamy factions.

The Court further observed that the Symbols Order and Sectin 29A operate in different realms.

"It is also to be noted that election symbols are considered essential in a country like India where literacy level of voters are not satisfactory. It is also a statutory requirement under the Conduct of Elections Rules, 1961. Therefore, even if it is assumed that Paragraph 15 of the Symbols Order is redundant, allocation of election symbols to political parties is indispensible. As there is no statutory provision regulating allocation of symbols to political parties and candidates in elections, the duty and power to regulate allocation of symbols would vest with the Election Commission even in the absence of Paragraph 15, in view of Article 324 of the Constitution of India. Under the circumstances, this Court is not inclined to accept the  arguments raised by the petitioners in this regard", the Court added.

"In case of split, the Commission has been authorised to determine which of the rival groups or sections is the party which was entitled to symbol", the Court added.

On the facts of the issue, the High Court observed that the conclusions of the Commission "cannot be said to be perverse and it cannot be said that no reasonable person can arrive at such conclusion".

"As both the lists produced by the rival factions were unreliable, the Election Commission proceeded to decide the numerical strength based on majority of members admitted by both sides. Such action of the Commission cannot be found fault with, in the circumstances of the case. It is further to be noted that the Commission based on its decision, not only considering the support of undisputed State Committee members, but also on the numerical strength of legislative party members of the party. Therefore, the Election Commission was justified in adopting a course available to it, in the facts and circumstances of the case", the HC observed

Election Commissioner Ashok Lavasa had dissented from the majority order by saying that more evidence was needed to uphold the exclusive claim of either of the groups.

Joseph has said that he will appeal against the judment before the divsion bench.