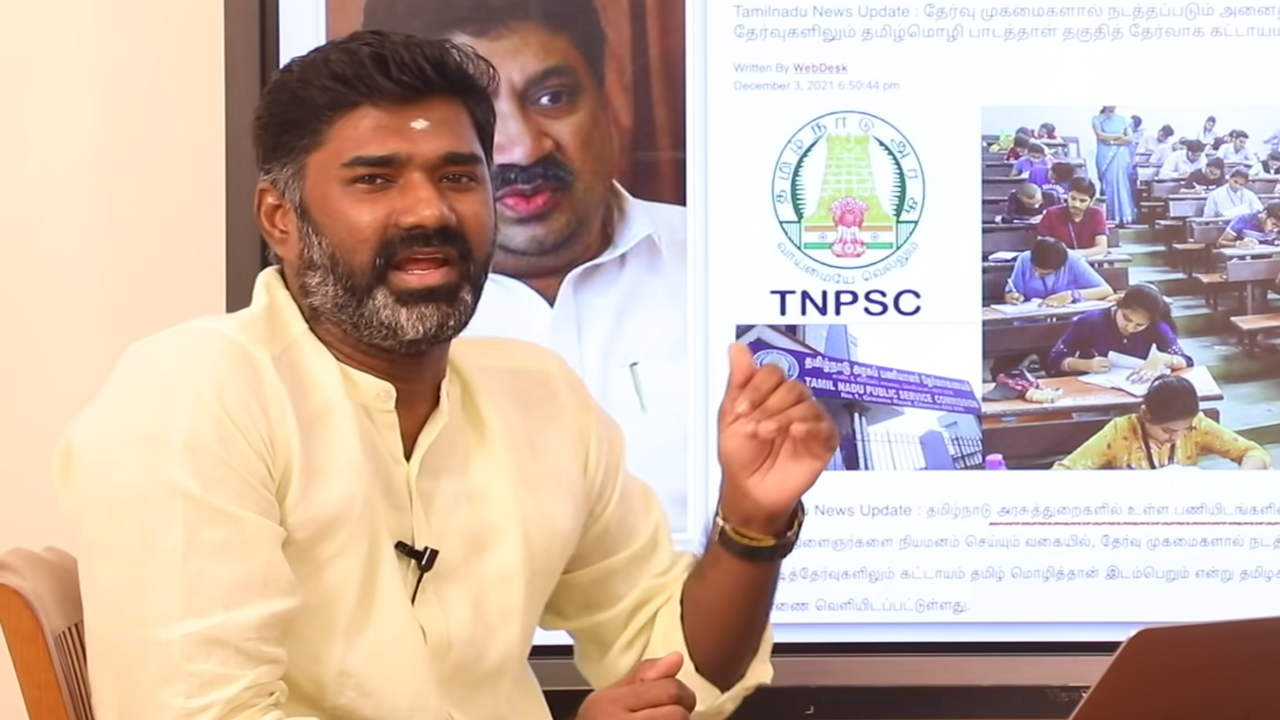 The Madurai Bench of Madras High Court has quashed an FIR registered against YouTuber M. Maridhas for asking on Twitter whether Tamil Nadu is 'turning into another Kashmir under the DMK Rule'. The Tweet was made by the accused alleging certain comments were made celebrating the death of former Chief of Defence Staff (CDS) Bipin Rawat's demise in Coonoor chopper crash Justice...

The Madurai Bench of Madras High Court has quashed an FIR registered against YouTuber M. Maridhas for asking on Twitter whether Tamil Nadu is 'turning into another Kashmir under the DMK Rule'. The Tweet was made by the accused alleging certain comments were made celebrating the death of former Chief of Defence Staff (CDS) Bipin Rawat's demise in Coonoor chopper crash

"Article 51A of the Constitution states that it shall be the duty of every citizen of India to uphold the sovereignty, unity and integrity of India.By no stretch of imagination can the petitioner be said to have harmed the national interests. The petitioner had only drawn the attention of the State government to certain nefarious tendencies brewing in the State. The petitioner wanted the security situation to be overhauled and improved. In the petitioner's perspective, there has been slackness and inaction on the part of those in charge of the State government. He has merely vented out his anxiety. Hence, the tweet of the petitioner cannot be characterized as seditious."

The petitioner lacked the requisite intent to commit the offence he has been charged with which is also cemented by the fact that the tweet was taken down in two hours, much before it garnered publicity, the court added to the above observations.

Relying on Arnab Manoranjan Goswami v. State of Maharashtra (2020) and Vinod Dua vs. Union of India (UOI) and Ors LL 2021 SC 266, the court observed that it has been vested with the constitutional duty to not deprive Maridhas his personal liberty.

"The petitioner is entitled to the constitutionally guaranteed fundamental right to freedom of speech and expression. The first respondent by registering the impugned FIR and arresting the petitioner has infringed upon the said right", the court observed while underscoring that Vinod Dua mandates the application of Sections 124 A and 505 IPC strictly within the confines of those provisions, and that journalists are entitled to protection in terms of Kedar Nath Singh Case.

The court also points out that a 'Youtuber' or any social media personality who regularly comments on public affairs has the very same rights that the journalists and media enjoy under Article 19(1)(a) of the Constitution.

The court also made an interesting remark about how the contentious tweet of Maridhas was perceived at large by classifying the same as a 'naïve tweet' in the 'Pamukian' sense, in reference to the Nobel Literary Laureate Orhan Pamuk.

"Orhan Pamuk who was awarded the 2006 Nobel Prize in literature makes a distinction between the "naive and the sentimental novelist". The naïve write spontaneously, almost without thinking, not bothering to consider the intellectual or ethical consequences of their words and paying no attention to what others might say. The sentimental writing is deliberate, well thought out and shaped in constant revision and self-criticism. The latter is the product of deep reflection."

The tweet might have been taken down by Maridhas himself within two hours after realising the nature of the misstep he had made, the court observes.

While allegedly equating Tamil Nadu with Kashmir, the petitioner had identified those celebrating former CDS Bipin Rawat's death as those belonging to 'Dravida Kazhakam' and 'Dravida Munnetra Kazhakam'. The defacto complainant in the case is a DMK functionary who came across the said tweet.

The petitioner counsel contended that the tweet was an 'agonised response of a true nationalist' in 'apprehension that separatism was rearing its ugly head in the State of Tamil Nadu'. The petitioner also added that he has been made a scapegoat by the ruling party for his firm stand against their policies.

The Advocate General for the state also submitted that they would like to take Maridhas into police custody and interrogate him on the grounds for his allegations about thriving separatist tendencies in the State. The petitioner's speech lacks bona fides or good intent and hence falls within the ambit of hate speech as laid down in Amish Devgan v. Union of India & Ors. (2020), it was submitted.

Justice G.R Swaminathan, while quashing the FIR, observed that none of the ingredients for the offences attributed to Maridhas has been fulfilled. Maridhas was booked for offences under Sections 124(A) [Sedition], Section 505(2) [Statements creating or promoting enmity, hatred or ill-will between classes] as well as 504 [Intentional insult with intent to provoke breach of the peace] of Indian Penal Code (IPC). Additionally, Madurai City Cyber Crime Cell of Police also booked the accused under Sections 505(1)(b) & 153A of IPC.

"making, publishing, or circulating any statement, or rumour, or report, with intent to cause, or which is likely to cause, fear or alarm to the public or to any section of the public whereby any person may be induced to commit an offence against the State or against the public tranquillity."

On the other hand, Section 153 A of IPC talks about "promoting enmity between different groups on grounds of religion, race, place of birth, residence, language, etc., and doing acts prejudicial to maintenance of harmony."

The compass of Section 504 IPC shifts towards guilt only when the twin requisites of insulting another person and such insult giving provocation to the person so insulted then or soon after to commit a breach of peace. The court reached the above conclusion by relying on S.Gopal v. State (1952) and other apex court judgments. Since the petitioner accused has not communicated an abuse or insult directly to the victim, the court noted in the order as follows:

"In this case, the petitioner had sent a tweet which was meant for the consumption of his followers at large. Even according to the defacto complainant, when he was casually surfing the social media, he came across the tweet by sheer chance. Section 504 of IPC is intended to cover only one to one interactions and not a case of this nature."

Even though the opposite counsels tried to persuade the court that the said provision must be interpreted in accordance with the advancement in technology, the court was of the opinion that the penal code must be strictly construed, more like 'a spider's cobweb' unlike the expansive interpretations given to welfare legislations or the Constitution.

"Section 505(1)(b) of IPC can be invoked only if the act of the person concerned would lead anyone to commit an offence against the State or against the public tranquillity. On the contrary, a holistic reading of the petitioner's tweet clearly indicates that the petitioner wants the State to use its might to ensure that there is public tranquillity", the court concluded on the charge under Section 505(1)(b).

On the application of Section 505(2) hat talks about statements promoting enmity/ hatred/ ill will between two classes and Section 153 A, the court was of the conviction that the tweet does not pit any two groups against each other.

"There is no reference to religion, race, place of birth, residence, language, caste or community. The Hon'ble Supreme Court had clearly held that unless one group is sought to be pitted against the other on the aforementioned grounds, the penal provisions are not at all attracted", the bench then went on to distinguish Amish Devgan where invoking religious animosity was evident and observed that the petitioner merely wanted 'nipping in bud the separatist tendencies'.

With respect to the application of Section 124A, the court gave a strict directive that 'the government established by law' must be differentiated from 'the persons currently carrying out administration' as laid down in Kedar Nath Singh v. State of Bihar (1962).

"Strong words used to express disapprobation of the measures of Government with a view to their improvement or alteration by lawful means would not come within the Section. Comments, however strongly worded, expressing disapprobation of actions of the Government, without exciting those feelings which generate the inclination to cause public disorder by acts of violence would not be penal", Maridhas' conduct was equivalent to him venting out his anxiety for the security of state, the court clarified.

Before concluding, Justice G.R Swaminathan also remarked that the complainant had alleged the petitioner to have "invoked hatred and enmity between DMK partymen and separatists". The court also noted that the said "comical feature" in the complaint might haven ensued due to the complainant making the draft in a swift manner.

Accordingly, the FIR registered upon the complaint of DMK functionary was deemed illegal and quashed while allowing the petition of Maridhas under Section 482 Cr.P.C.