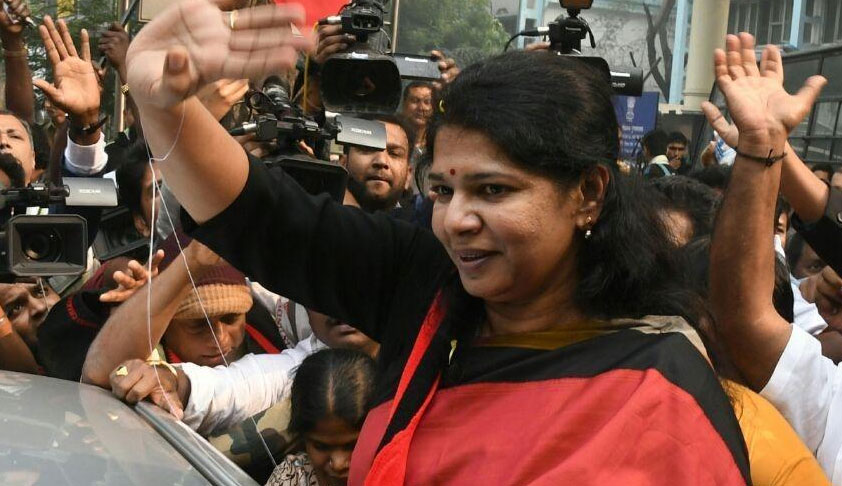 Justice M Nirmal Kumar quashed the case that pertains to a 2018 DMK led protest in Villupuram on the issue of garbage disposal. Kanimozhi was accused of tarnishing the reputation of then CM, E. Palaniswamy, by alleging corruption in her speech.

The defamation case filed in Principal District & Sessions Court, Villupuram was challenged by Kanimozhi in 2019, through a quashing petition at High Court.

Kanimozhi, through her Counsel Senior Advocate P. Wilson, had argued that her statements were taken out of context. It was submitted that the speech was meant to point out the falsity of poll promises made by the AIADMK government and the rampant corruption in governance.

The maintainability of the complaint filed by the public prosecutor who was given sanction under Section 199(2) of CrPC was also challenged by Kanimozhi. She argued that the former CM has misused the Public Prosecutor's office by resorting to it for filing a criminal complaint against a political rival. She contended that the public prosecutor relied on a hearsay statement of two persons said to have witnessed the petitioner's speech in the protest, though the alleged speech extracted in the complaint, does not make out any offence under Section 499 of Cr.P.C and certainly does not pertain to conduct of public functions.

She underscored in her petition that no public servant including the Chief Minister was immune from the clutches of scrutiny and criticism by the opposition or the people.

As the DMK Government came to power under M K Stalin, it has issued Orders withdrawing criminal defamation cases instituted during the period of the AIADMK Government. The Madras High Court took note of the same and quashed the criminal complaint against Kanimozhi.

"Considering the rival submission and on perusal of the materials, it is seen that though the Government has passed the G.O.Ms.No.674, dated 10.08.2021, for withdrawal of the case, in view of the orders passed by the Apex Court on 10.08.2021, in the case of Ashwini Kumar Upadhyay Vs. Union of India and another in W.P.(C). No.699 of 2016, wherein certain guidelines issued to check the misuse of prosecutor's power in withdrawing cases under Section 321 Cr. P.C...In the case of the sitting former MPs and MLAs, directions issued that no prosecution case shall be withdrawn, without the lieu of the High Court."

The court then relied on K.K.Mishra Vs. The State of Madhya Pradesh & Anr., 2019 and Karur Murali Vs. Public Prosecutor, Tirunelveli, 2018 to lay down the established guidelines relating to the use of Section 199(2) of CrPC:

"It is clearly stated that the offence of defamation committed attract Section 199(2) Cr.P.C., against the functionaries mentioned therein is to be seen whether an offence committed is against the State and the same relate to the discharge of public functions by such functionaries. The State, therefore, would be rightly interested in pursuing the prosecution; hence the special provision and the special procedure."

Yesterday, the court concluded its order by saying that on perusal of the G.O. and the complaint, no such imputation made in discharge of public function of the then Chief Minister is found.

"The petitioner belongs to the opposition party and political statements have been made. The allegations made in the complaint are political in nature and not on personal level and no way pertain to the public functioning of the Hon'ble then Chief Minister. In view of the same, this Writ Petition is liable to be quashed."

The Madras High Court had in May 2019 granted an interim stay on all proceedings arising from the criminal defamation charges since the court was convinced that Kanimozhi had made out a prima facie case.

While granting the interim stay, the court had noted in its order as below:

"A reading of the allegations made in the complaint filed against the petitioner for an offence under Section 499 of Indian Penal Code (Central Act XLV of 1860) punishable under Section 500 of Indian Penal Code, show that the criticism has been made by the petitioner in the individual capacity of the then Chief Minister and none of the allegations pertains to the conduct of the Chief Minister in discharge of the public function."

The interim order in favour of Kanimozhi, granted back in 2019, was extended until the latest quashing order.