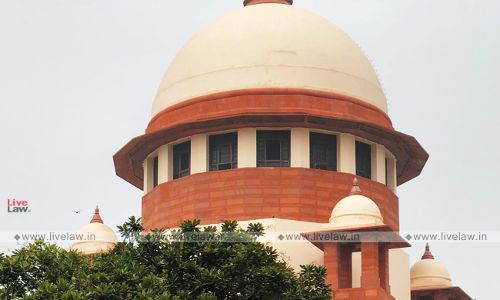 The Supreme Court on Monday directed that no prosecution against sitting of former MPs snd MLAs will be withdrawn without the permission of the High Court of the concerned state.The Court further directed that judges hearing the criminal cases against MPs/MLAs in Special Courts should continue in their current posts until further orders of the Supreme Court. This direction will be subject to...

The Supreme Court on Monday directed that no prosecution against sitting of former MPs snd MLAs will be withdrawn without the permission of the High Court of the concerned state.

The Court further directed that judges hearing the criminal cases against MPs/MLAs in Special Courts should continue in their current posts until further orders of the Supreme Court. This direction will be subject to the retirement or death of the judges holding the trial of cases against legislators.

A Bench comprising the Chief Justice of India NV Ramana, Justice Vineet Saran and Justice Surya Kant issued the direction while hearing the plea filed regarding pendency of criminal cases against MPs and MLAs and expeditious disposal of the same by setting up of Special Courts.

"The first issue is about misuse of power under Section 321 of the Code of Criminal Procedure regarding withdrawal of cases. We find it appropriate to direct that no prosecution against MPs, MLAs to be withdrawn without leave of High Court in the respective suo motu cases registered in pursuance to our order", the bench ordered.

The High Courts are requested to examine the withdrawals, whether pending or disposed of after 16.09.2020, in the light of guidelines laid down by the Supreme Court regarding withdrawal of cases in the recent Kerala assembly ruckus case (State of Kerala vs K Ajith and others)

"To ensure disposal of pending cases, it's necessary for this court to direct presiding officers of special courts, or CBI courts involved in the prosecution of MPs, MLAs to continue in their present post until further orders. Such a direction of this court barring the judicial officers will be subject to their retirement or death", the bench added.

The bench has granted liberty to the Registrar Generals of High Courts to move applications seeking relaxation of this condition against the transfer of judges, if need arises.

The Bench issued the direction pursuant to Amicus Curiae Senior Advocate Vijay Hansaria's submission that no prosecution should be allowed to be withdrawn under section 321 Cr.P.C. against a Member of Parliament or a Member of Legislative Assembly/ Council (sitting and former) without leave of the High Court.

The Amicus Curiae had submitted a report prepared with the assistance of Advocate Sneha Kalita informing the Court about the following few instances of the proposed withdrawal of cases:

• State of Karnataka vide Government Order dated 31.08.2020 issued instructions for withdrawal of 61 cases, many of which are against elected representatives of the State Legislature.

• State of Maharashtra is reportedly withdrawing political cases against activists registered prior to 31st December 2019.

The present matter was listed today after a request for urgent hearing was made on Friday by the Amicus Curiae Advocate Vijay Hansaria before a Bench led by CJI Ramana saying that certain directions are required in the case.

Details of the petition:

The present petition was filed in the Supreme Court in 2016 demanding that convicted persons be debarred uniformly from Legislature, Executive and Judiciary.

The plea has sought directions to provide adequate infrastructure to set up Special Courts to decide criminal cases related to People Representatives, Public Servants and Members of Judiciary within one year and debar the convicted persons uniformly from Legislature, Executive and Judiciary.

The plea has also sought directions to implement the "Important Electoral Reforms" proposed by the Election Commission, Law Commission and National Commission to Review the Working of the Constitution;

Further directions have been sought to set minimum qualification and maximum age limit for Legislatures and allow cost of the petition to petitioner.

The petition, filed by Mr. Ashwini Kumar Upadhyay, demanded that an order be issued directing the Centre to take necessary steps to debar persons charged with criminal offences from contesting elections, forming a political party and becoming office-bearers of any party. It further sought a direction for providing adequate infrastructure to set up Special Courts to decide criminal cases related to members of the Legislature, Executive and Judiciary within one year.