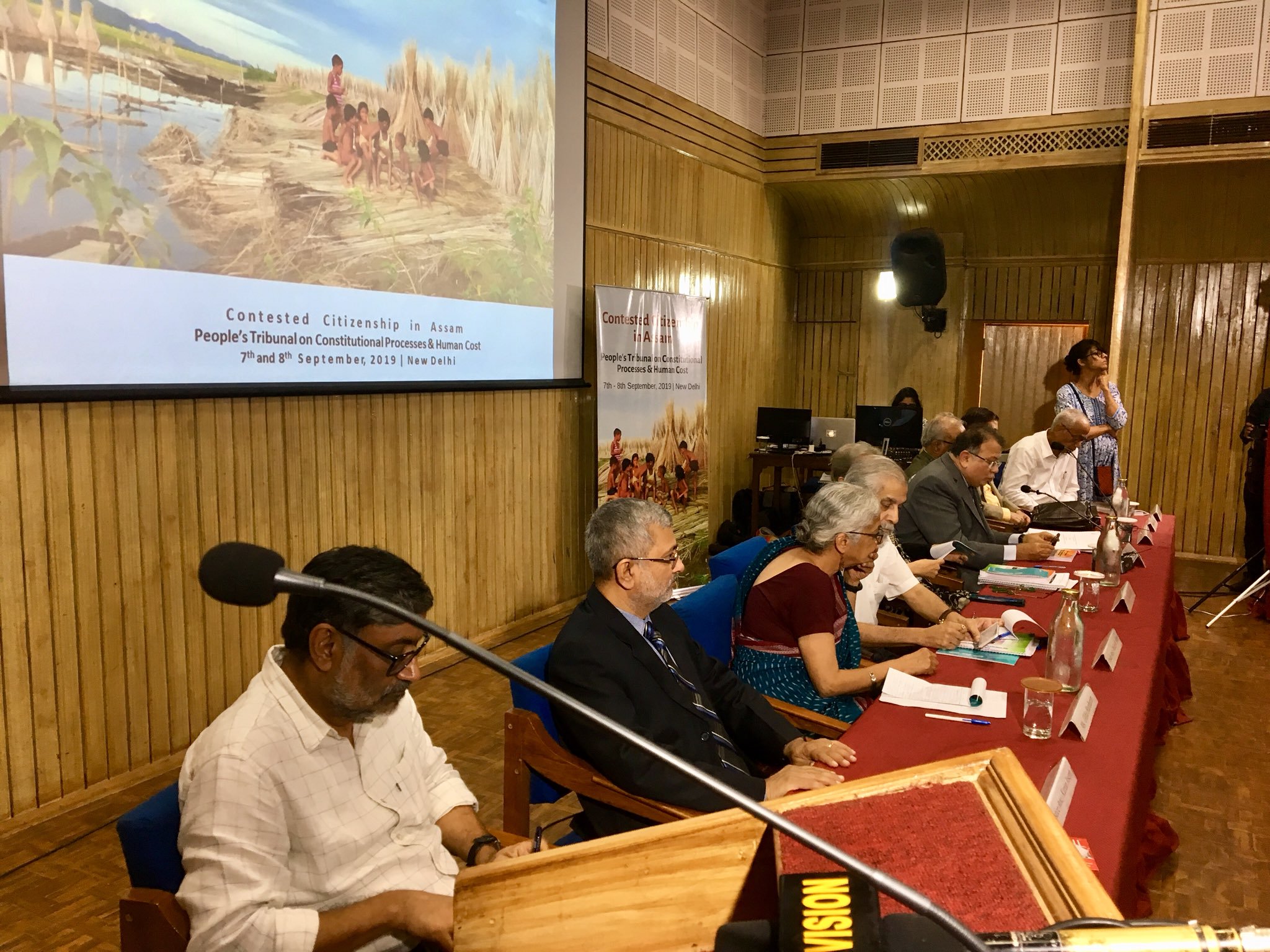 An "Interim Jury Report" has been issued by the People's Tribunal on Contested Citizenship in Assam: Constitutional Processes and Human Cost.

The jury reproached the apex court for handling the NRC process in an impolitic manner which led to exclusion of over 19 lakh people from the final list. "Despite the scale of the exercise, the judiciary's insistence on setting deadlines has increased the pressure on both the process and the people involved", they said. Further, they considered four questions:

Firstly, they contemplated whether the NRC process was in conformity with the Constitution. In this regard the Tribunal accosted that the burden of establishing citizenship was wrongly placed on individuals.

"In Sarbananda Sonowal v Union of India, the Supreme Court relied upon unverified – and now disproved – data to hold that migration amounted to "external aggression" upon India. It then invoked Article 355 of the Constitution to strike down legislation that would have placed the burden in a foreigner's case upon the State. The Court thus established a constitutional requirement that the burden would always lie upon the individual accused of being a foreigner".

"The judgement in the case of Sarbananda Sonowal erroneously equated migration with "external aggression" or invasion which, in effect, dehumanised migrants and infringed their rights to personal liberty and dignity. External aggression and internal disturbance thus became a narrative and influenced all subsequent proceedings under The Foreigners Act".

The jury said that the Assamese, largely a population of religious, linguistic or ethnic minorities and impoverished and unlettered rural residents, could not be expected to possess documents related to birth, schooling and landownership. They in fact were of the opinion that refusal to accept the documents so produced by such population, on the basis of minor discrepancies in spelling, was unreasonable.

The members also objected on the Supreme Court's participation in the NRC process, an administrative function. "When the courts "take charge" of such processes, the system of remedies is virtually taken away", the report said. They also condemned executive control over Foreigners Tribunals, established by an order of the Ministry of Home Affairs, and stated that the Tribunal had proceeded in a squarely arbitrary manner. "Cases then referred to the Foreigners Tribunals ...have been processed in an arbitrary manner without prior investigation or grounds for making such reference. The verification forms were often empty with just names and addresses. No grounds were furnished", the report stated.

Reflecting upon the role of judiciary in upholding constitutional processes and morality, the members said that an erroneous decision in Sarbananda Sonowal v. Union of India had a domino effect on future proceedings pertaining to The Foreigners Act. Moreover, the judiciary failed the people by imposing irrational conditions on marginalised and vulnerable people, for release from detention camps.

Thirdly, the Tribunal speculated what was the humanitarian crisis in the area. It was noted that verifications were mostly held outside the home district and thus a large number of people were forced to appear before the verification officers in faraway places. This was specifically challenging for people living in geographically secluded areas like Char, a river island.

The jury said that while it empathizes with the angst of Assamese people for linguistic and cultural security, the human cost against this angst was blown out of proportion. The torment and paranoia of being declared a foreigner had lead to uncountable suicides, loss of livelihood of Assamese working outside Assam, etc. The members were also conscious of the burden put on women and children.

In case of women they stated "Since underage marriage is common in the region, women become voters only after marriage. The documents have husbands' names and may not help establish legacy. In most cases, women do not have any papers such as those related to land, birth or school. Women arbitrarily declared as foreigners and detained across detention centres in the state of Assam suffer disproportionately. In addition to the loss of citizenship, this also curtails their right to dignity, access to privacy and personal hygiene". Whereas children who were "born to single mothers/victims of polygamy, were not mentioned in the family tree. This has often led to their exclusion from the final NRC, and made them vulnerable to detention."

Mulling over the implications of extending NRC to the rest of the country, the jury said that the notification issued by the Central govt., for updating the 'National Population Register' (NPR) from April to September 2020, could be abused to target vulnerable individuals and groups.

Another notification issued by the central govt. which decentralized the power of establishing foreigners' tribunals under the Foreigners (Tribunals) Order, 1964 was also condemned. The notification empowers even the state government, UT administration, district collector or magistrate to establish foreigners' tribunals. "This order could foment social strife and alter India's constitutional arrangements. Moreover, this order was passed without public debate or discussion in Parliament", the report stated.

The jury confirmed that while neither of the two notifications formally initiates an all-India NRC, they did lay down the groundwork for it. In fact, they stated that the NPR was violative of the right to privacy of an individual.