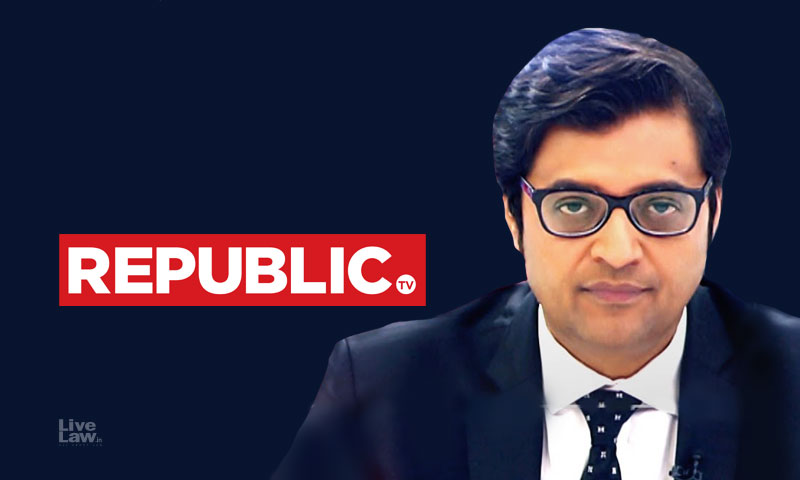 The Bombay High Court will hear ARG Outlier Media Pvt Ltd and Arnab Goswami's petition seeking directions for quashing of FIR in the TRP Scam case tomorrow, i.e. Monday. Petitioners have alleged that the said FIR has been filed as the Mumbai police, including the Commissioner of Police Param Bir Singh harbour malice and ill-will against the petitioners for their reporting in the Palghar...

The Bombay High Court will hear ARG Outlier Media Pvt Ltd and Arnab Goswami's petition seeking directions for quashing of FIR in the TRP Scam case tomorrow, i.e. Monday. Petitioners have alleged that the said FIR has been filed as the Mumbai police, including the Commissioner of Police Param Bir Singh harbour malice and ill-will against the petitioners for their reporting in the Palghar mob lynching case and the Sushant Singh Rajput death case.

"Based on the series of press statements given by the Respondent No. 4, the Petitioners have been falsely implicated in connection with the FIR No. 143 of 2020. It is respectfully submitted that the Mumbai police, including the Respondent No. 4, Mr. Param Bir Singh harbour malice and ill-will against the Petitioners as Republic TV and R. Bharat have lately been at the forefront in questioning the tardy investigation by the Mumbai police in the Sushant Singh Rajput case and the Palghar lynching incident.

According to the petitioners, after the Palghar mob lynching incident took place on April 16, 2020, a few days later on April 21, Arnab hosted a debate on R. Bharat in relation to the Palghar incident in a news show called 'Puchta hai Bharat'.

This debate and other news reports aired on the Republic TV and R. Bharat questioned the tardy investigation, inconsistent versions of the authorities and the administration and the State Government's silence on the Palghar incident given that the unfortunate incident happened in Maharashtra which is presently under rule of an alliance government jointly formed by Shiv Sena, the Congress and the Nationalist Congress, the petition contends.

"Following this debate, several complaints were filed and FIRs were registered against the Channel, at the behest of Congress (which is a part of the coalition governing the State of Maharashtra) in a concerted effort to try and muzzle his voice as Republic TV and R. Bharat were questioning the inefficiency of the State Government in investigating the Palghar incident. The Petitioner No. 2 along with the officials of Petitioner No. 1 were thoroughly harassed by investigating authorities under the garb of investigation of charges which had no basis whatsoever."

Moreover, two reporters of Republic TV were arrested in Khalapur, Raigad district outside Maharashtra Chief Minister Uddhav Thackeray's farmhouse for allegedly trying to trespass. In reference to this incident, the petition argues-

"The two reporters were in pursuit of an investigative assignment when they were nabbed by the Maharashtra police and they were placed under arrest. This depicts the motivated attempt of the Respondent No. 4/Mumbai police to silence the reporters who pursue investigative stories."

Citing another instance of political bias, petitioners contend that Shiv Cable Sena, an outfit of the Shiv Sena issued a threatening letter dated September 10, 2020 to the cable operators across Maharashtra, asking them to ban the telecast of the petitioner's news channels.

Although petitioners moved Bombay High Court seeking directions for not stopping the broadcast of petitioner's channels, the High Court observed that it was not necessary to pass any orders to restrain Cable TV operators from stopping the telecast of the Republic TV and Republic Bharat, as the alleged call for boycott made by 'Shiv Cable Sena' has no "effect in law" as it was not a statutory authority.

Then, on September 16, 2020, Arnb Goswami received a show cause notice from the Maharashtra Legislative Assembly demanding a written explanation to show cause as to why an action for breach of privilege of the Chief Minister, other Ministers, Government and entire House, be not taken against him for maligning the image of the Chief Minister of Maharashtra and other Ministers of the state of Maharashtra, and also for alleged violation of special/ extraordinary powers of the State Assembly.

Finally, referring to the above actions initiated against Arnab and two of his channels, the petition states-

The Broadcast Audience Research Council of India (BARC) had entered into a contract with Hansa Research Private Limited (HRPL), for installing and managing the barometers in Mumbai for the measurement of impressions on television channels. One Vishal Vedprakash Bhandari, a relation manager of HRPL was arrested by the police for committing malpractices in relation to the barometers installed at households to increase the TRPs of channels. The Deputy General Manager of HRPL, then presented himself before the Mumbai police to record his statement on the basis of which the said FIR was registered.

On October 9, 2020, summons under Section 160 of the CrPC were issued to the Chief Financial Officer of ARG Outlier Media S Sundaram and to the Head of Western Region Distribution Ghanshaym Singh, respectively, to remain present before Asst. Commissioner. of Police, DCB, CID, Mumbai, Shashank Sandbhor, on October 10, 2020 at 11 am for recording their statements in the matter.

Alleging that they have been falsely implicated in the said case, the petitioners have contended that although the complaint itself does not name Republic TV but India Today, the Mumbai Police Commissioner gave the impression to people at the press conference that Republic TV was the third 'big channel' involved in the said scam. The petition states-

"It is evident from the statement given by the Respondent No. 4 that there is clear desperation on the part of the police machinery and the political establishment to somehow falsely implicate the Petitioners instead of investigating the alleged role of the channels specifically stated in the complaint."