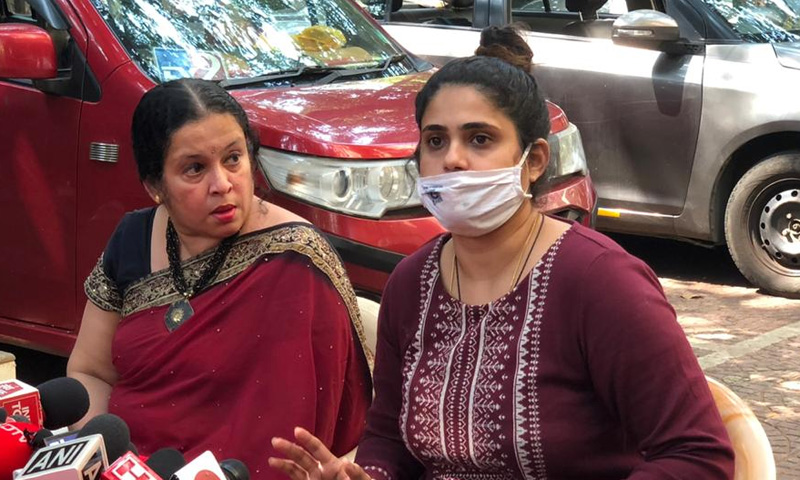 The Bombay High Court in a special sitting on Saturday issued notice to the State of Maharashtra in Adnya Naik's petition alleging that the investigating officer in the previous investigation, wherein proceedings of abetment to suicide in relation to FIR against Republic TV Chief Arnab Goswami and two others were closed, had tried to protect the accused by "maliciously fabricating records...

The Bombay High Court in a special sitting on Saturday issued notice to the State of Maharashtra in Adnya Naik's petition alleging that the investigating officer in the previous investigation, wherein proceedings of abetment to suicide in relation to FIR against Republic TV Chief Arnab Goswami and two others were closed, had tried to protect the accused by "maliciously fabricating records and documents."

Petitioner is the 28-year-old daughter of Anvay Naik, who along with his mother Kumud Naik committed suicide and in a suicide note stating that they have decided to take the extreme step on account of payments due to them not being cleared by the owners of three companies – Republic Tv Chief Arnab Goswami, Feroz Shaikh of IcastX/Skimedia and Niteish Sarda of Smartworks.

Raigad police arrested Goswami early in the morning on November 4, and he was thereafter remanded to judicial custody for 14 days by CJM, Alibag.

The petitioner has made serious allegations against the previous investigating officer SHO, Alibag at the relevant time, Suresh Varade. The petition alleges that Suresh Varade reached at the scene of the offence around 8:40 am and saw the deceased Kumud Naik and Anvay Naik both lying unconscious. However, he chose to wait to move Kumud Naik and Anvay Naik to the Civil Hospital, Alibag till the petitioner and her mother arrived around 2:30 pm, until then it was too late as they were declared dead upon arrival. Petition states-

"Such critical time of more than 7 hours was wasted without any treatment for which no explanation is provided and clearly there was no attempt to revive the unconscious Kumud Naik or to revive the father of the petitioner Anvay Naik."

The petitioner has contended that by virtue of certain non-payments by certain clients of her father, there was under tremendous pressure for payment to his creditors and sometimes he (Anvay Naik) expressed his frustration of finishing his own life. He was then advised about meditation by the petitioner's mother (Akshata Naik).

According to the petitioner, on May 4, 2018 Anvay Naik left along with his mother Kumud Naik for Alibaug at their farm house in village Kawir, Taluka Alibaug, District Raigad for the settlement of certain business transactions. Then, on May 5, 2018 at around 9:15 am, petitioner received a call from Alibag calling them immediately to their farmhouse in village Kawir, Taluka Alibaug. They were told that Kumud Naik was in an unconscious state.

Accordingly, petitioner and her mother left Mumbai and reached around 2:30 pm where they were informed that the petitioner's father and grandmother had committed suicide.

Allegations Against The Police And Previous IO

According to the petitioner, prior to their arrival at the farm house, the officers of the Alibaug Police Station had already arrived at around 8:40 am and apparently moved Kumud Naik and Anvay Naik from their alleged original positions. Petitioner was told by officer Suresh Varade, that her grandmother was unconscious and then only after the arrival of the petitioner and her mother, both Anvay Naik and Kumud Naik were moved to the civil hospital Alibag. With regard to the investigation that followed,

The petitioner filed writ petition, immediately thereafter the State Ministry for Home Affairs, directed reinvestigation in the matter by the State CID.

"It is necessary to reinvestigate the matter because as per the medical record Dr. Ajay Ingle informed PI Alibag at 1545 hrs. that at 1510 hrs. Kumud Naik was brought dead at the hospital. It is also a record that the doctor had informed PI Alibag at 1550 hrs. that Anvay Naik been brought by relatives at 1515 hrs. However it is surprising that the two ADRs (Accidental Death Register) were registered much before Kumud Naik and Anvay Naik were pronounced dead by the doctor (Ajay Ingle)."

It is necessary to reinvestigate the matter because Arnab Goswami was not arrested though his name was mentioned in the suicide note, which is considered as a dying declaration and accused Arnab Goswami was let off by just recording his statement in Mumbai giving him ample opportunity to influence the nature of the investigation."