'Proceedings Against Prashant Bhushan Are A Travesty Of Justice': Chennai Lawyers Write To SC [Read Statement] 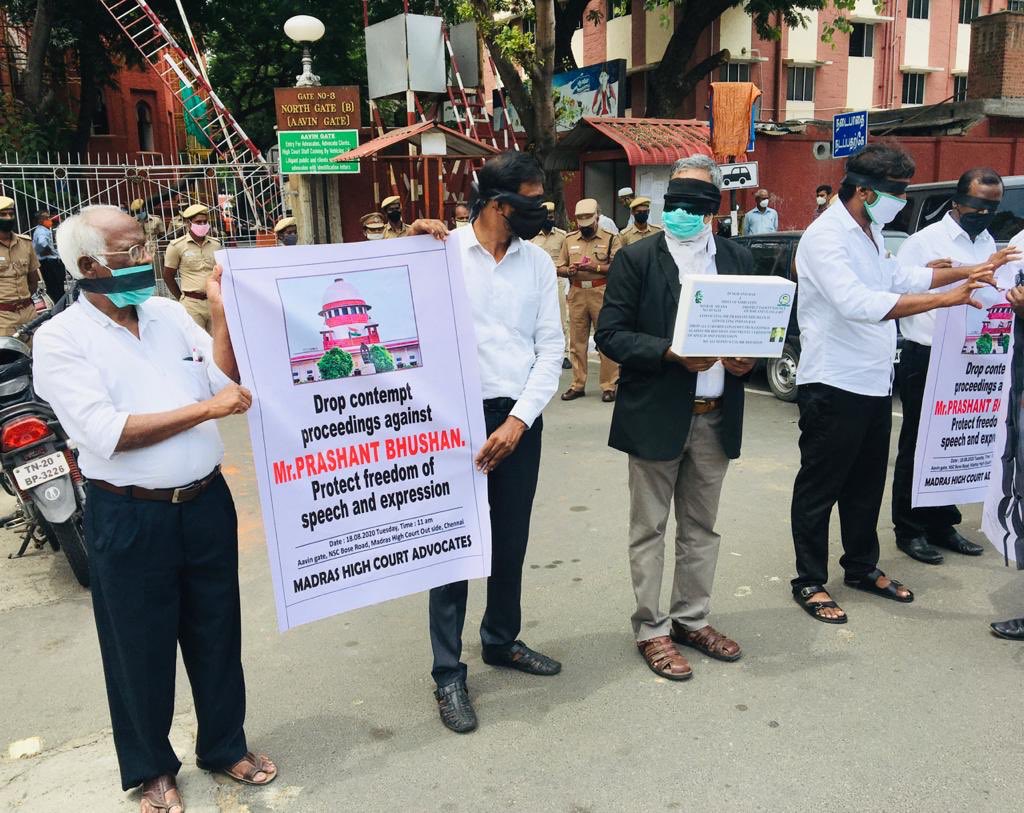 A Group of Advocates from Chennai have addressed a letter to the Chief Justice of India and other Judges of the Supreme Court, raising their concerns over the manner in which Advocate Prashant Bhushan was held guilty of contempt for his tweets over the CJI and functioning of the Supreme Court. "Lawyers, being stakeholders and integral to the justice delivery system, have...

A Group of Advocates from Chennai have addressed a letter to the Chief Justice of India and other Judges of the Supreme Court, raising their concerns over the manner in which Advocate Prashant Bhushan was held guilty of contempt for his tweets over the CJI and functioning of the Supreme Court.

"Lawyers, being stakeholders and integral to the justice delivery system, have the unique privilege and duty to scrutinise the functioning of the Courts and act as conscience keepers of the judiciary through an audit of its functions. They are the interface between the public and the judiciary. The opinions expressed by a fearless Bar actually benefit the judiciary, as otherwise it has no mechanism to learn about people's opinion of its functioning. The judiciary does not function in a vacuum but in a political system impacting the lives of millions," the Advocates wrote while criticizing the verdict.

They stressed that in the very nature of things, an action of criminal contempt creates a "stifling atmosphere" for the respondent, because the Court is the complainant/victim, the prosecutor and the judge. Hence, the same "must always be exercised cautiously, wisely and with circumspection".

In the letter, they have proceeded to highlight various inconsistencies in the proceedings against Mr. Bhushan, which as per them led to "travesty of justice".

Firstly, they have highlighted that Mr. Bhushan was "singled out" by the SC for voicing an opinion that has been shared and expressed by several others, including sitting and former judges of the Supreme Court itself.

"However, we are deeply disturbed by the action taken against Prashant Bhushan, a lawyer of more than 30 years practice in the Supreme Court and who has espoused many causes in public interest, often against high executive functionaries. His tweets only reflect what other commentators have said. It is therefore rather alarming that the Supreme Court has found him guilty of contempt holding that his tweets cannot be said to be "fair criticism", are scurrilous, malicious and have a tendency to scandalise the Court. It is to be noted that both the tweets are in the context of concerns/opinions from a cross section of informed public about the latitude shown by the Court towards draconian executive actions and the general image of the judiciary that has been dented by the actions/inactions of judges," the letter reads.

Secondly, they have expressed concern over the "hasty manner" in which the proceedings took place, without adhering to the procedural safeguards and principles of natural justice.

They pointed out that there is no discussion in the judgment as to how the impugned action (tweets) is found to be "malicious". Further, Mr. Bhushan's reply affidavit and the facts and circumstances given therein providing the basis for his opinion have also not been discussed nor has the opinion been held to be unfounded; and yet the Court exercised its constitutional power to find him guilty.

Over a 100 advocates of the Madras High Court, including Senior Counsels, participated in a peaceful protest against the judgement rendered by a 3-judge Bench headed by Justice Arun Mishra holding Adv. Prashant Bhushan in contempt over two tweets. @pbhushan1 #ContemptofCourt pic.twitter.com/ygKKVJfQr3

In so doing, the Advocates wrote, the Court rejected all his objections— (i) to the listing of the case, (ii) to the hearing by the Bench presided by Justice Arun Mishra and (iii) to non-supply of the administrative order for listing of the case or a copy of the complaint itself.

"Such objections are material while defending a person's liberty. Though the Supreme Court has held that it is not bound by the Contempt of Courts Act and the procedure can be summary, a fair procedure is essential for a just decision," the letter reads.

In this backdrop, the Advocates have raised the following issues before the Supreme Court, with hope that the Court will address the same:

Inter alia, Over 2000 lawyers, including noted Senior Advocates, have endorsed the statement of support for Bhushan.

The Executive Committee of the Bar Association of India also expressed its dismay at the Supreme Court verdict.