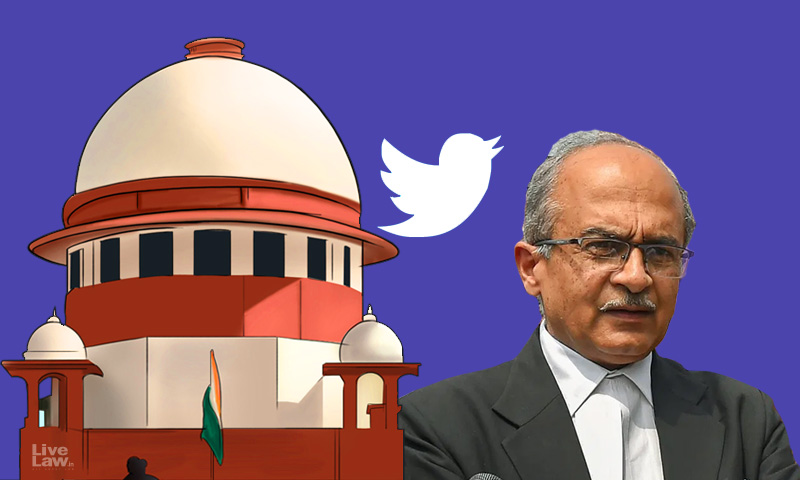 The Campaign for Judicial Accountability and Reforms (CJAR) has issued a statement condemning the decision of the Supreme Court in the Prashant Bhushan contempt case. "We feel that Mr Bhushan's two tweets being expressions of his anguish and a bonafide criticism of the court and the Chief Justice of India, are fully protected under Article 19(1)(a) of the Constitution of India and...

The Campaign for Judicial Accountability and Reforms (CJAR) has issued a statement condemning the decision of the Supreme Court in the Prashant Bhushan contempt case.

"We feel that Mr Bhushan's two tweets being expressions of his anguish and a bonafide criticism of the court and the Chief Justice of India, are fully protected under Article 19(1)(a) of the Constitution of India and cannot be stifled by a such a conviction," the statement reads.

It is pointed out that the law of contempt is archaic, aimed to "silence opinions" that seek accountability and reforms in the functioning of the judiciary, and therefore, it must be abolished, as has been done in other jurisdictions.

Bhushan, who is also a Convenor of the CJAR, was held to be guilty of contempt in connection to his tweets (made in June 2020) about the Chief Justice of India and the Supreme Court. The order was passed by a 3-Judge bench of the Supreme Court on Friday, which shall hear him on sentence on August 20.

Talking about the "hasty" manner in which the contempt proceedings were instituted against Mr. Bhushan and concluded (within less than 2 months), the CJAR said,

"When the functioning of the court has been disrupted due to the Covid-19 pandemic and important cases concerning the rights of millions are being adjourned for weeks and months, the haste with which the Court has proceeded to hear and convict Mr Bhushan is unseemly and sends a message of stern consequence to those who choose to express themselves in manners that are not palatable to Judges."

The organization has asserted that respect and dignity cannot be demanded from citizens on the "threat" of contempt. Rather, the same has to be earned through impartial and effective decision making.

However, by convicting Mr. Bhushan for criminal contempt, the CJAR said, "we believe that the court has lowered its own dignity in the eyes of the ordinary person in India. Once hailed as one of the "most powerful Constitutional courts" in the world, it is unfortunate that the court is intolerant of even the most temperate and well intentioned criticism."

The Top Court's decision has also been slammed by the Commonwealth Human Rights Initiative (CHRI), as being a sign of "deterioration" in the state of free speech in the country. They have asserted that the law of contempt is a 'colonial legacy' which must be repealed to enable free speech.

A press note issued by the organization states that the judgment sends a "chilling message" to the people that criticism comes with a cost.

The Indian Executive Board of CHRI, headed by former CIC Wajahat Habibullah and comprising of distinguished jurists like Justice (Retd.) Madan B Lokur, former Judge of the Supreme Court and Justice AP Shah, former Chief Justice of High Courts of Delhi and Madras, among others said,

"However uncharitable or inappropriate the tweets might be, the Hon'ble Court "in passing the judgement, has made it clear that 'the majesty of the law and of the administration of justice' is above the fundamental freedom of expression sending a chilling message about the cost of criticism."

Inter alia, over 400 Advocates from across the country and activists, entrepreneurs, etc. have addressed a letter to the SCBA President Dushyant Dave, expressing their "protest" against the SC Decision.

They have objected to the urgency shown in concluding the contempt case while other important matters are not being heard amid the pandemic, which they also claim led to "denial of an opportunity" to Mr. Bhushan, to effectively defend himself.

"Under the Indian Constitution, every citizen of India is guaranteed a right to a fair trial/ representation/hearing, and must be given a fair opportunity to be heard before being condemned in any proceedings. The cherry picking of cases especially in these pandemic times may give a negative impression about the Court," the statement read.

They have also criticized the sudden listing of the 2009 contempt case pending against Mr. Bhushan, in "total disregard" of the current situation created by the Covid 19 pandemic. They said,

"Senior lawyers who were representing Mr Bhushan in these proceedings repeatedly requested the court to defer the hearing till the resumption of physical Court, since they felt that a virtual hearing was not very conducive for such an involved matter, with voluminous court records. Moreover, there was no apparent urgency to the matter, since it had already been pending for eleven years. These requests were disregarded and the proceedings in this old case, taken out of the cold storage, were instead expedited."

The letter asserts that the majesty of the Supreme Court is not affected so much by criticism, as it is by its own response to it. Therefore, they have urged the SCBA to take up the issue with regard to proper hearing in the contempt case.

They have also sought the video link of the virtual hearing on sentence scheduled to be held on August 20, which must symbolically be held in 'open court'.

"Having recognised the right to freedom of speech and expression on several recent occasions, the Hon'ble Court must show the same sensitivity and circumspection before issuing criminal contempt in a case that has a bearing on its own tolerance to speech," the statement read.

Over 40 Senior Advocates and prominent lawyers from across the Bar have issued a statement expressing "dismay" at the Supreme Court's decision holding Advocate Prashant Bhushan guilty of contempt.

The statement, signed by Advocates Navroz H Seervai, Vrinda Grover, Kamini Jaiswal, Shyam Divan, Sanjay R Hegde, Menaka Guruswamy, Karuna Nundy, among others, state that an independent judiciary does not mean that judges are immune from scrutiny and comment.

"It is the duty of lawyers to freely bring any shortcomings to the notice of bar, bench and the public at large. While some of us may have divergent views on the advisability and content of Mr. Prashant Bhushan's two tweets, we are unanimously of the view that no contempt of court was intended or committed especially when contrasted with the normal standard that "Justice is not a cloistered virtue... She must be allowed to suffer the scrutiny and respectful, even though outspoken comments of ordinary men."" they wrote.

They further said that the SC judgment in Mr. Bhushan's case will not restore the authority of the court in the eyes of the public but rather, it will discourage the lawyers from being outspoken.

The statement asserts that Bhushan's tweets that led to the conviction order dated August 14 do not say anything out of the ordinary, other than what is routinely expressed about the court's working in recent years by many people, including retired judges of the Supreme Court, on public fora and on social media.

On this note they have asserted that the contempt order must not be given effect to, until a larger bench, sitting in open court after the pandemic has the opportunity to review the standards of criminal contempt.

They have also expressed disappointment over Supreme Court's refusal to seek the valuable opinion of the Attorney General of India in this matter, which is mandated even as per the contempt law.