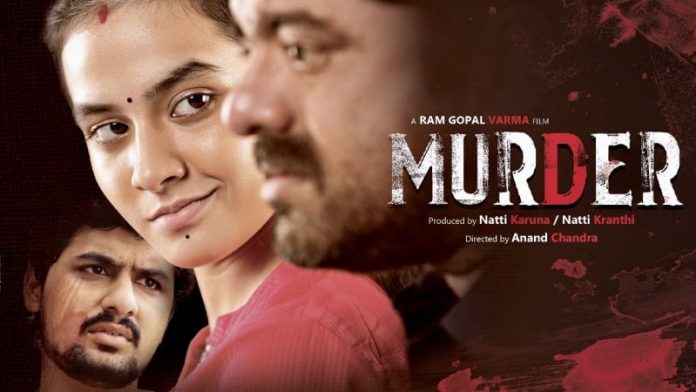 The Telangana High Court on Friday (06th November) gave a green signal for the release of Ram Gopal Varma's Telugu film 'Murder' which is based on the real-life incident, wherein a Dalit youth, Pranay Perumalla was assassinated in 2018 in broad daylight by killers, hired by his father in law (belonging to an upper caste), in an alleged hate crime.The Bench of Justice M. S. Ramachandra Rao...

The Telangana High Court on Friday (06th November) gave a green signal for the release of Ram Gopal Varma's Telugu film 'Murder' which is based on the real-life incident, wherein a Dalit youth, Pranay Perumalla was assassinated in 2018 in broad daylight by killers, hired by his father in law (belonging to an upper caste), in an alleged hate crime.

The Bench of Justice M. S. Ramachandra Rao and Justice T.Amarnath Goud was hearing the appeal filed by Ram Gopal Varma and others (Appellants/Defendants), challenging the 24th August's order of the Nalgonda court stalling the release of the film and also the promo of the film on YouTube.

As averred by her, she fell in love with Pranay and got married to him on 30.01.2018 but this was not accepted by her father, one Maruthi Rao, who was trying to persuade her to come back to his house.

However, she refused to accept her father's request; she got pregnant and had gone for a medical checkup at Jyothi Hospital at Vinobha Nagar, Miryalaguda, close to her matrimonial home on 14.09.2018 accompanied by her husband and mother-in-law.

After they came out of the hospital at about 13.30 hours, her husband Pranay was attacked and stabbed with a knife several times and he had died on account of said injuries.

Respondent/Plaintiff Amrutha (wife of late Pranay Perumalla) filed a suit in Nalgonda court against Ram Gopal Varma and others (Appellants/Defendants) for grant of a perpetual injunction.

She stated that on 28.07.2020, the Appellants/Defendants (Ram Gopal Varma and others) released the 'trailer' of the movie 'Murder' and that she found that in the said trailer, her original name and her real-life character and also that of her husband, Pranay Kumar were used.

It was prayed before the Court that the Appellants/Defendants (Ram Gopal Varma and others) be restrained from releasing, publishing, exhibiting publicly or privately, selling, promoting or advertising or recreating in the form of drama or serial or any other literary or artistic expression in respect of the person 'Pranay' (her late husband).

Particularly, her prayer was with regard to a motion picture in the name of 'Murder' which was then being made by the Appellants/Defendants (Ram Gopal Varma and others) on the life of the respondent/plaintiff.

She alleged before the Court that without her consent, the Appellants/Defendants (Ram Gopal Varma and others) collected the real-life story, photographs and videos of herself and her husband, late Pranay Kumar, and also of her father, late Maruthi Rao, from various sources "illegally with a dishonest intention to cause insult and to defame her in public."

Further, she alleged that based on the said information, the Appellants/Defendants (Ram Gopal Varma and others) had decided to start making a film by the name 'Murder'.

She contended that Ram Gopal Varma tweeted that the movie 'Murder' was going to be "a heart-wrenching story based on the respondent and her father - ' Saga of the Danger of a father loving a daughter too much' and that such a sad father's film was being launched on Father's day i.e. 21.06.2020."

She argued that the right to privacy guaranteed to her by Article 21 of the Constitution of India was "sought to be violated by the appellants by specifically referring to her name, her husband's name and her father's name in various social media posts, such as Twitter, Instagram, WhatsApp messages, posted by 1st appellant (Ram Gopal Varma)."

She contended that the intention of the Appellants/Defendants (Ram Gopal Varma and others) in making the movie 'Murder' was a direct intrusion and invasion of the private life of the petitioner and that the appellants did not have any manner of right to do so, that affects her private life, and her 'right to privacy' is a part of her 'right to live'.

She argued that "the appellants were supporting a criminal publicly through the said movie; it is dangerous and damaging to the civil society and in any event, they could not have made the movie without taking her consent."

She had prayed that the movie was proposed to be released in the 1st week of August, 2020 and the appellants ought to be restrained from releasing the same.

The Trial Court had held that the film, being made by the appellants was a purely commercial venture based on the life of the respondent and her family members.

Further, it was held that Amrutha had prima facie established that the film, if allowed to be exhibited, would cause serious prejudice to her and to her family members and irreparable loss would be caused to them.

Assailing this order of the Trial Court, an appeal was filed before the High Court of Telangana by Ram Gopal Varma and others.

The High Court, in its order, noted,

"The events which have occurred in her life i.e., the alleged murder of her husband are admitted by her to be in the public domain. The counsel for the respondent did not deny that there was also a wide range reporting in the local newspapers and cable TV channels about these events. Thus, this information was in the public domain."

"In our view, it cannot, therefore, be said that the events which have occurred in the life of the respondent are in that sense unique to her and to her family alone."

The Court observed that a person undoubtedly has a right to privacy in relation to her family, marriage, procreation, motherhood and child-bearing and none can publish anything concerned with these matters without his/her consent.

Yet, the Court said,

"There is an exception to the said rule i.e., that any publication concerning these aspects would become unobjectionable if such publication is based upon public records including court records."

In other words, the Court said that once the matter becomes a matter of public record, the right to privacy is no longer subsisting and it becomes a legitimate subject for comment for press and media among others.

Further, the Court noted that,

"When the events which occurred in the life of the respondent are already in the public domain, she cannot plead any violation of the right of privacy by the appellants in making a movie based on such events. The Trial court did not consider this aspect of the matter i.e information already being in public domain while passing the impugned order. So its order cannot be sustained."

However, the Court did take note that "if any movie is made by specifically referring to her name, her husband's name and her father's name, much pain and anguish would be caused to the respondent."

In this context, the appellants were directed to not use or refer to the respondent or her deceased husband or her deceased father by name, or the captions mentioned on Twitter, social media, anywhere in the movie 'Murder' being made by them and also in social media, printing material (posters).