Scope Of Article 300A Of Constitution Of India Isn't For Invoking It Against Any Action Of An Individual: Madhya Pradesh High Court 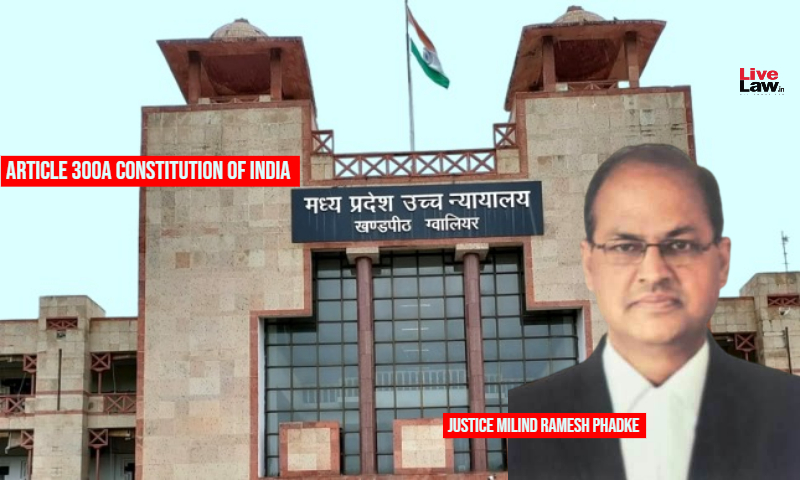 The Madhya Pradesh High Court has observed that Article 300A of the Constitution of India acts as a protector of individual interest and a tool for the state for infrastructural and various other development. The Court also stressed its scope is limited to the state's action.

"The Article says that- No person shall be deprived of his property save by the authority of law. This means that nobody can be deprived of his right over property except if it is prescribed by law. This article emphasizes on the doctrine of eminent domain which means that the state can take over any private land if it is for public use. Therefore, the law prescribing the acquisition needs to be valid and the acquisition of the land by the state must be for a public purpose," the Court remarked.

However, the Court did remark that though the provision for providing compensation to the property owners has not been mentioned in the article, the Supreme Court. through interpretation in numerous cases. has held that if the state acquires land for public use it has to provide compensation to the owner according to Article 300A.

The Court was essentially dealing with a writ plea filed by one Vijay Mahobia against the alleged action of the private respondents in trying to oust him from a property of his legal ownership.

His counsel submitted that even though there is a status quo order in favor of the petitioner (passed by DRT, Lucknow), the private respondent in connivance with the Bank, was trying to demolish/oust him from the property in question.

The Counsel argued that the act was violative of Article 300A of the Constitution of India, which speaks of persons not to be deprived of the property save by authority of law.

Noting that the scope of Article 300A is not for invoking it against any action of an individual, for that there lay the civil remedy rather it is for protection against the State, wherein acquisition is done for a public purpose, the Court observed thus:

"The petitioner is asserting his right against a private individual for which remedy lay somewhere else, which according to him has already been availed, as it is a settled proposition that a Writ under Article 226 of Constitution of India can be issued when a fundamental right is violated and a Writ cannot lie against a private individual where he violates any fundamental rights."

Thus, keeping in view the above legal position, the petition being misconceived and being sans merit, was dismissed.