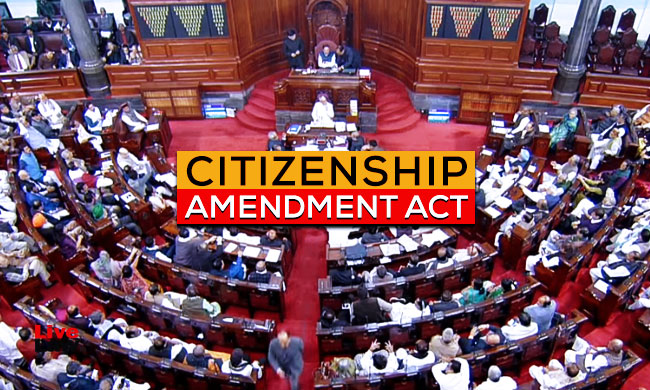 On Monday, the Legislative Assembly of Telanagana passed a resolution opposing the contentious Citizenship Amendment Act, 2019, making it the seventh state to do so. Expressing doubts with regards the legality of the central legislation, the assembly unanimously passed the resolution moved by Chief Minister K Chandrashekhar. In doing so it observed, "The Act makes people belonging...

On Monday, the Legislative Assembly of Telanagana passed a resolution opposing the contentious Citizenship Amendment Act, 2019, making it the seventh state to do so.

Expressing doubts with regards the legality of the central legislation, the assembly unanimously passed the resolution moved by Chief Minister K Chandrashekhar. In doing so it observed,

"The Act makes people belonging to certain religions eligible for Indian citizenship while excluding other persons solely on the basis of religion. Citizenship on the basis of religion violates not only the principle of equality enshrined in Article 14 of the Constitution, but also the principle of secularism, which constitutes the Basic Structure of the Constitution of India. By discarding "secularism" and "equality before law" in our citizenship laws, a theocratic state may be institutionalized."

The resolution further rejected the enactment for it being discriminatory towards the Muslim community and for being opposed to basic idea of secularism evolved by our Constitution's founding fathers.

"The Indian national movement was a convergence of various beliefs, thoughts and ideas. Upon Independence, our founders embraced diversity, pluralism and secularism in the Constitution. The enactment of CAA has raised concerns that by introducing a religious test for citizenship, the Act insults the memory of India's founders, who consciously chose not to incorporate a 'racial principle' or 'religious principle' in the provisions applicable to citizenship," it read.

It further states that the CAA, NRC and NPR are nothing but a "concerted attempt" to deprive a particular religious group of its right to equality and non-discrimination.

"There have been concerted attempts to tinker with the inclusive and non-religious nature of Indian citizenship through the Citizenship Amendment Act, 2019, National Population Register and, the National Register of Citizens. Besides violating principles of equality, non-discrimination, secularism, this concerted attempt will also endanger the lives of vulnerable groups who do not possess adequate documentary proof of citizenship," it read.

Commenting on the updation of NPR, the resolution states that it has created justifiable apprehensions in the minds citizens of being a backdoor move to affront their legitimate rights, and hence it must not be implemented.

"The Parliamentary enactment of Citizenship Amendment Act, 2019 ("CAA") has created grave apprehensions among various sections of society that it is a prelude to the National Population Register which will lead to a nationwide National Register of Citizens.

There are apprehensions among all sections of citizenry, especially the economically weaker sections and illiterate persons that they will be required to show documentary proof of citizenship as well as of their parents. It is also feared that the disproportionate impact will be felt most by Dalits, Adivasis, backward classes and linguistic as well as religious minorities."

Hence, cutting across party lines, all the members of the assembly rooted for withdrawal of all references to any religion from the CAA and non-implementation of NPR and NRC.

"In view of the apprehensions among a large section of people in India, the Legislative Assembly of Telangana resolves to urge the Government of India to amend the Citizenship (Amendment) Act, 2019 in order to remove all references to any religion or to any foreign country.

Further, this House expresses concern over the proposed implementation of NPR, NRC which may result in exclusion of large number of people.

This House, accordingly urges the Government of Telangana to take all necessary steps to safe guard the people of Telangana from exercises such as NPR and NRC," the resolution said.