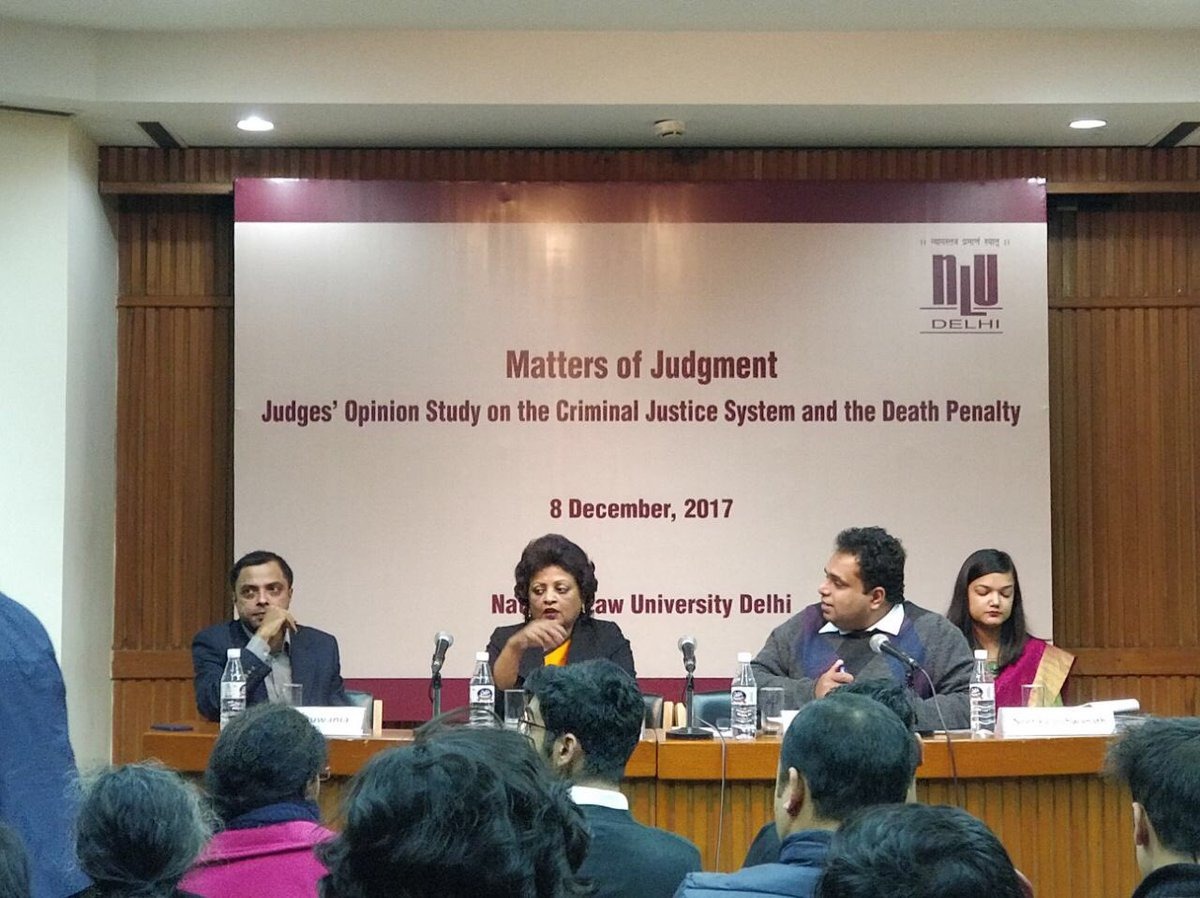 The National Law University of Delhi (NLU-D) on Friday hosted an event at India International Centre, New Delhi, to celebrate the release of the research compilation of the Centre on Death Penalty -‘Matters of Judgement’, an opinion study on the death penalty and the criminal justice system with 60 former judges of the Supreme Court. The occasion saw in attendance Delhi High Court...

The National Law University of Delhi (NLU-D) on Friday hosted an event at India International Centre, New Delhi, to celebrate the release of the research compilation of the Centre on Death Penalty -‘Matters of Judgement’, an opinion study on the death penalty and the criminal justice system with 60 former judges of the Supreme Court. The occasion saw in attendance Delhi High Court senior advocate Rebecca John and Dr. Anuj Bhuwania of the Ambedkar University, Delhi. The occasion was also graced by the presence of former Supreme Court judge Justice Brijesh Kumar, who is one of the 60 judges interviewed in the course of the research study.

The Centre on the Death Penalty of NLU-D is engaged in conducting research into the intricacies of the capital punishment and providing pro bono legal representation to prisoners on death row. Presently, the Centre is offering litigation support to 60 such convicts, mostly at the Supreme Court, scheduling meetings with these prisoners, re-analysing the evidence and gathering mitigating factors including, inter alia, childhood circumstances and instances of abuse. The Centre has a research wing, studying the trends of award of the capital punishment, particularly in the death penalty-heavy states of Maharashtra, Madhya Pradesh and Delhi. The Centre also concerns itself with the psychiatric health of the death row convicts and is associated with VIMHANS, Bangalore in regard to the same. Besides, it has a public affairs wing dedicated to establishing a public repository of related archives and literary materials in as many as eight Indian languages.

The research compilation is based on the views expressed by 60 retired judges of the apex court in semi-structured interviews, inquiring about the investigative proceedings and the trial, the sentencing policy and the award of death sentence, and the judicial attitude towards the imposition of the highest degree of punishment.

The findings revealed that in most cases, the convicts have undergone extreme torture on the presumption that “seasoned criminals would not yield to casual questioning”. Their access to legal representation has been majorly observed to be very poor. Fabrication of evidence is a common problem on account of the blatant misuse of section 27 of the Indian Evidence Act of 1872. Instances of wrongful convictions are also common, though the judges are equally perturbed by wrongful acquittals. The study also ventures into the concept of ‘rarest of the rare’ cases as envisaged in the Bachan Singh judgment and how the perception as to what qualifies as ‘rarest of the rare’ varies from one judge to another based on their personal background; the aggravating and mitigating facts of each case, such as young age, no prior convictions etc; and the judicial discretion in imposing the death penalty- the retentionist and the abolitionist approaches.

Senior counsel Rebecca John discussed the conflicting judgments rendered by the top court, from Bachan Singh in 1980, followed by Machi Singh in 1983, introducing five parameters for the award of the highest punishment with the focus being on the crime and not the criminal, the 1996 Ravji judgment, virtually overruling the judgment in Bachan Singh, the Aloke Nath Dutta case of 2006, the Swamy Shraddhananda matter of 2008, and the 2009 ruling in Santosh Kumar Bariyar, making a departure from the Ravji judgment based on which 6 death sentences had already been awarded. Thereafter, senior counsel Rebecca John analysed the pattern surfacing with the more recent matters of Sangeet v. State (2012), Shankar Kisanrao Khade (2013) and finally, Yakub Memon.

She emphasised on the necessity of compulsory evidentiary hearings and lamented the lack of attempts on the part of defence lawyers to bring into light mitigating circumstances.

In response to a question, the senior counsel cited the recent incident of the murder of Ryan International School student Pradyuman Thakur to depict the unfortunate misuse of Section 27 of the Act of 1872, where a wrongful arrest and detention was effected following the recovery of the bloodstained murder weapon.

She also blamed certain statutory provisions such as the Unlawful Activities (Prevention) Act of 1967, permitting the accused to be kept in custody for as many as 180 days for the purpose of investigation, and the “bizarre” Section 125 of the IPC, laying down punishments varying from fine to imprisonment upto 7 years to life imprisonment for the offence of sedition.

Dr. Anuj Bhuwania also addressed the issue of the said Section 27 developing into a route for backdoor extra-judicial confessions, stating that “Section 27 is created to be misused”.

Director of the Centre on the Death Penalty Anup Surendranath also participated in the panel discussion.