Oscar Wilde's Moment Of Redemption By SC In Sec.377 Judgment 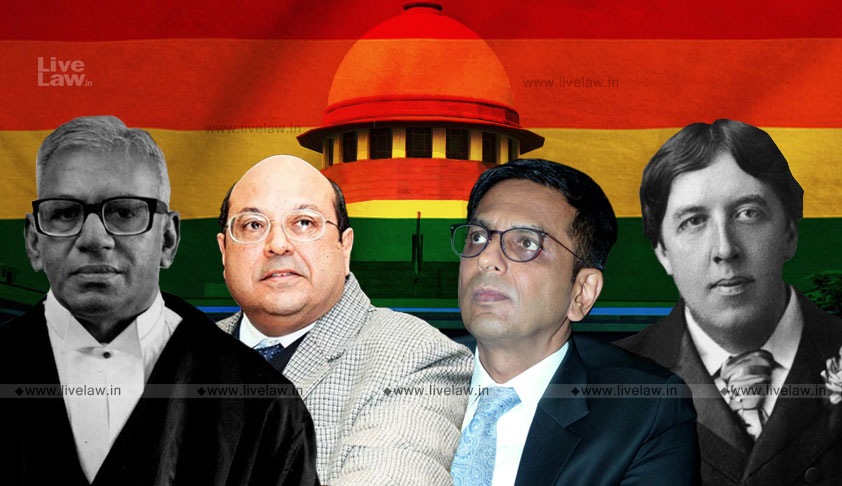 The literary genius was labelled a ‘sex pervert’ by a 1976 SC judgment.Oscar Wilde, famous English writer and champion of individualism, was unfortunately branded a ‘sex pervert’ by the Supreme Court in a 1976 judgment. It was the judgment in R K Agarwal v State of Orissa AIR 1976 SC 1774, where the Supreme Court was dealing with an appeal filed by a 70 year old man convicted...

The literary genius was labelled a ‘sex pervert’ by a 1976 SC judgment.

Oscar Wilde, famous English writer and champion of individualism, was unfortunately branded a ‘sex pervert’ by the Supreme Court in a 1976 judgment. It was the judgment in R K Agarwal v State of Orissa AIR 1976 SC 1774, where the Supreme Court was dealing with an appeal filed by a 70 year old man convicted under Section 376 IPC for rape of a 6 year old girl. While rejecting his prayer for reduction of sentence in consideration of his advanced age, the Court, speaking through Justice  V R Krishna Iyer, observed that jail term in his old age could kindle in him a new flame of search for the truth and make him a finer person.  As an example that prison term could bring in reformation, it was stated “No one is too old to become good and 'De Profundis' was written in prison by a sex pervert who was also a literary genius”.

The literary genius referred here is Oscar Wilde, who wrote “De Profundis” while serving prison term after conviction under the charge of “gross indecency with other men”. During the prime of his literary success in London, Wilde had a homosexual affair with Lord Alfred Douglas, which became a public scandal. Wilde was prosecuted for his homosexual affection under the Offences Against Persons Act 1861 for 'sodomy' and 'gross indecency'. During the trial, Wilde defended his homosexual relationship, with impassioned arguments on individual autonomy and sexual agency. He had written a poem “Two Loves” with the verse, “Love that dare not speak its name”, about his love for Lord Douglas.  The poem was cited as an evidence of his “indecency”’. The following extract from the trial is worth reading.

Charles Gill (prosecutor): What is "the love that dare not speak its name?

Wilde: "The love that dare not speak its name" in this century is such a great affection of an elder for a younger man as there was between David and Jonathan, such as Plato made the very basis of his philosophy, and such as you find in the sonnets of Michelangelo and Shakespeare. It is that deep spiritual affection that is as pure as it is perfect. It dictates and pervades great works of art, like those of Shakespeare and Michelangelo, and those two letters of mine, such as they are. It is in this century misunderstood, so much misunderstood that it may be described as "the love that dare not speak its name," and on that account of it I am placed where I am now. It is beautiful, it is fine, it is the noblest form of affection. There is nothing unnatural about it. It is intellectual, and it repeatedly exists between an older and a younger man, when the older man has intellect, and the younger man has all the joy, hope and glamour of life before him. That it should be so, the world does not understand. The world mocks at it, and sometimes puts one in the pillory for it.

But his exhortations were not received well by the Court and the society, which were bogged down by prudish notions of Victorian morality.  He was sentenced for two years of imprisonment with hard labour in 1895. While serving his prison term, Wilde wrote “De Profoundis”, a poignant work on the sufferings of life, with deep spiritual undertones. “To regret one’s own experiences is to arrest one’s own development. To deny one’s own experiences is to put a lie into the lips of one’s own life. It is no less than a denial of the soul.”, he said in the work. Prison crushed his mind and body, and he died at the age of 46, impoverished and broken.

A man with such profound thoughts was unfortunately bracketed with a child-rapist by the Supreme Court in R.K Agarwal. To his credit, Justice Krishna Iyer has quoted Wilde positively in a later judgment. In Maru Ram vs. Union of India AIR 1980 SC 2147, while determining the term of sentence of life imprisonment in the backdrop of Section 433A CrPC, Justice Iyer quoted Oscar Wilde from the poem The Ballad of Reading Gaol, to highlight the despair caused to prisoners by uncertainty about the length of their term. The statement in R. K Agarwal could have been an inadvertence; however, it became a judicial stamping of Oscar Wilde as a “sex pervert”.

The thoughts expressed by Oscar Wilde on bodily autonomy and sexual agency found resonance with the Supreme Court in Navtej Johar while scrapping Section 377 IPC to the extent it applied to consenting adults. The judgements of Justice Nariman and Justice Chandrachud quoted Wilde extensively.

Justice Nariman starts his judgment by stating : “The love that dare not speak its name” is how the love that exists between same-sex couples was described by Lord Alfred Douglas, the lover of Oscar Wilde, in his poem Two Loves published in 1894 in Victorian England. Justice Nariman also details the trial of Oscar Wilde, and notes that this case led to led to law reform in the U.K to decriminalize homosexuality, 60 years later.  The statement made by Oscar Wilde in the trial, in response to prosecutor’s query about his poem, has been quoted in its entirety by Justice Nariman.

Justice Chandrachud too makes a mention of “the love that dare not speak its name”, in his judgment. He cites Oscar Wilde as one of several eminent persons, who had to face prosecution for homosexuality. Justice Chandrachud’s observation in the judgment that “Sexuality must be construed as a fundamental experience through which individuals define the meaning of their lives”, echoed the thoughts expressed by Wilde through his life and writings.

Justice Indu Malhotra’s statement that history owes an apology to the members of homosexual community for the ignominy and ostracism caused to them by law, can be taken as an apology to Oscar Wilde as well, for the unfortunate label put on him by the Court four decades ago.

So, in one sense,Navtej Singh Johar redeems Oscar Wilde.

Post Script : The UK passed a law in 2013, granting posthumous pardon to about 50,000 gay men who were convicted and sentenced for homosexuality, including Oscar Wilde.