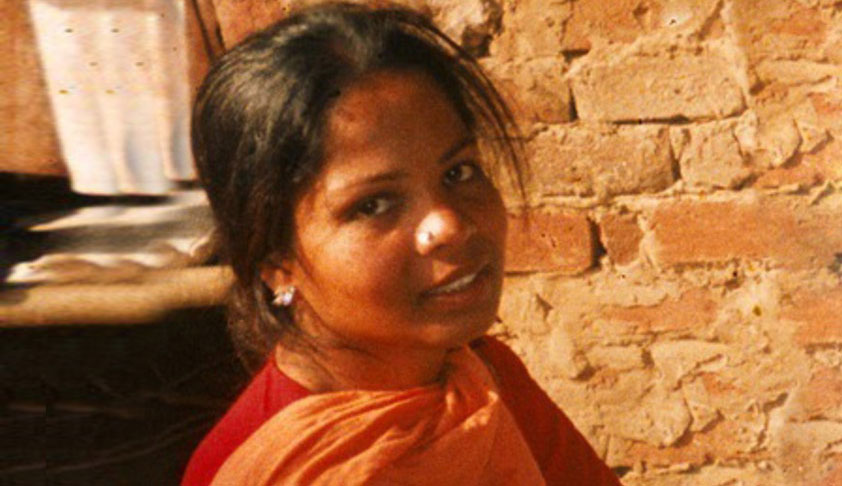 The Supreme Court of Pakistan on Wednesday acquitted a Christian woman who has been on death row for almost eight years on blasphemy charges.Asia Bibi, a mother of five from Punjab province, was convicted of blasphemy in 2010 and  was sentenced to hang after she was accused of defiling the name of Prophet Muhammed during an argument the year before with fellow Muslim farmers.A Bench...

The Supreme Court of Pakistan on Wednesday acquitted a Christian woman who has been on death row for almost eight years on blasphemy charges.

Asia Bibi, a mother of five from Punjab province, was convicted of blasphemy in 2010 and  was sentenced to hang after she was accused of defiling the name of Prophet Muhammed during an argument the year before with fellow Muslim farmers.

Justice Khosa wrote a separate concurring judgement, which lamented the falsehood perpetuated by the complainants and asserted that Asia seemed to have been sinned against, observing, “Blasphemy is a serious offence but the insult of the appellant’s religion and religious sensibilities by the complainant party and then mixing truth with falsehood in the name of the Holy Prophet Muhammad (Peace Be Upon Him) was also not short of being blasphemous.

It is ironical that in the Arabic language the appellant’s name Asia means ‘sinful’ but in the circumstances of the present case she appears to be a person, in the words of Shakespeare’s King Leare, “more sinned against than sinning”.”

The judgment began with several verses from various sources establishing the authority of Allah and Prophet Muhammad. It also referred to verses of the Quran, which mention that abusers and contemners of the Prophet are actually the opponents of Allah and His Prophet.

“When thy Lord inspired the angels, (saying) I am with you. So, make those who believe stand firm. I will throw fear into the hearts of those who disbelieve. Then smite their necks and smite of them each finger.” [Al-Anfal (8:12)]

With this, the judgment built up to the intent behind introduction of blasphemy law under Section 295-C of the Pakistan Penal Code. It explained, “Muslim communities that exist around the globe have always acted against any such act of contempt and have openly reacted to such, followed by serious repercussions. That is why anything which in any way attacks any aspect of his sacred life, infuriates Muslims to an intolerable limit, resulting in extremely serious law and order situation, with grievous, disastrous consequences. That is why Section 295-C had to be enacted to bring such contemners before the Court of Law.”

The court, however, acknowledged the fact that the law is sometimes misused by individuals levelling false allegations of blasphemy. It further emphasised on the virtue of living in “peace and harmony, with compassion and love to our other fellow human beings”, and the importance of a fair trial, as stipulated in the Quran.

The court then went on to point out several glaring contradictions in the prosecution story in the case at hand. It also took note of the submissions made by the court witness and the investigating officer, who had claimed that the remarks made by Asia were in response to a quarrel initiated by the complainants. The court was informed that the complainants had refused to take water from Asia owing to her religious faith, and had then gone on to allege blasphemy after a deliberation of five days.

“An FIR lodged with a noticeable delay and after consultations and deliberations loses its credibility and in the present case the FIR had been lodged with an unexplained delay of five days and the complainant had admitted before the trial court that the FIR had been lodged after he and the people of the village had “investigated”, “consulted” and “peeped into the matter”. The complainant and the FIR lodged by him, thus, were not worthy of much credit,” Justice Khosa observed, expressing dissatisfaction with the circumstances in which the FIR was filed as well as the investigation that occurred thereafter.

The court found it “unfortunate” that this covenant was not followed by Prophet Muhammad’s followers in the case at hand, noting that even if there was some iota of truth in the allegations levelled, the “truth in this case had been mixed with a lot which was untrue”.

It, therefore, set aside the conviction and sentence awarded to Asia, opining that the prosecution had failed to prove its case against her beyond reasonable doubt.