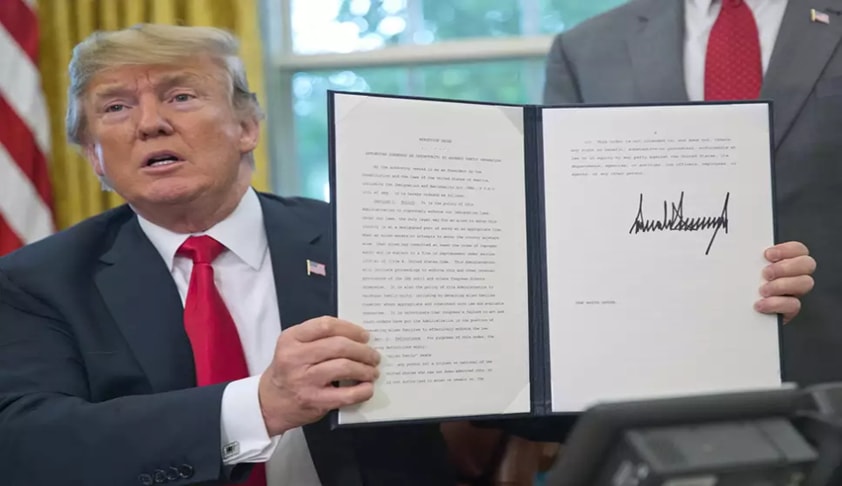 Judge Dana M. Sabraw of the United States District Court for the Southern District of California on Tuesday granted an injunction on the lawsuit filed by American Civil Liberties Union (ACLU) against family separation of migrants. The Judge further directed the authorities to reunite families with their minor children under the age of five within 14 days, and with those over the age of five, within 30 days.

More than 2,300 migrant children were reportedly separated from their parents after the Trump administration began a “zero tolerance” policy in early May, seeking to prosecute all adults who crossed the border illegally, including those traveling with children. Over the ensuing weeks, the news media was saturated with stories of immigrant families being separated at the border. People protested, and elected officials weighed in. Congress threatened action, and seventeen states filed a complaint against the Federal Government challenging the practice.

Thereafter, an Executive Order (EO) was issued on 20 June, requiring preservation of the “family unit” by keeping migrant families together during criminal and immigration proceedings to the extent permitted by law, while also maintaining “rigorous” enforcement of immigration laws. This order, however, did not address the reunification of over 2,000 children with their families. Thereafter, a “Fact Sheet” issued by the Department of Homeland Security (DHS) on 23 June outlined the government’s efforts to “ensure that those adults who are subject to removal are reunited with their children for the purposes of removal.”

ACLU had initially approached the Court on behalf of a mother and her then 6-year-old daughter, who were separated after arriving last November in the United States to seek asylum and escape religious persecution in the Democratic Republic of Congo. While they were reunited in March, the ACLU is now pursuing class-action claims on behalf of other immigrants.

During the recent hearing, ACLU had asserted that neither the EO, nor the Fact Sheet eliminate the need for the requested injunction, highlighting the fact that there has neither been any reunification plan in place, nor any communication measures between separated parents and children.

At the outset, the Court agreed with ACLU that the EO as well as the Fact Sheet did not render the injunction unnecessary, highlighting the fact that the EO was subject to various qualifications, for instance, allowing the government to separate a migrant parent from his or her child “where there is a concern that detention of an alien child with the child’s alien parent would pose a risk to the child’s welfare.” Similar issues were pointed out in the Fact Sheet to conclude that “neither of these directives eliminates the need for an injunction in this case”.

The Court also noted that the practice of family separation was in action being employed before the zero-tolerance policy was announced as well, and that this had resulted in “casual, if not deliberate, separation of families that lawfully present at the port of entry, not just those who cross into the country illegally”. In addition, it took note of the fact that the practice was being implemented without any effective system or procedure for (1) tracking the children after they were separated from their parents, (2) enabling communication between the parents and their children after separation, and (3) reuniting the parents and children after the parents are returned to immigration custody following completion of their criminal sentence.

It then opined that the context and circumstances in which the practice of family separation was being implemented supported the finding that the plaintiffs have a likelihood of success on their claim that the practice violates the parents’ substantive due process rights to family integrity under the Fifth Amendment to the United States Constitution.

The Court also concluded that the Plaintiffs are likely to suffer irreparable harm in the absence of an injunction, asserting that separation of a parent from his or her child constitutes irreparable harm. The balance of equities, it further noted, rests in their favour as well, weighing the absence of harm to the Government against the harms to the Plaintiffs. The factor of public interest was also found to be in favour of the Plaintiffs, with the Court observing,

“This case involves two important public interests: the interest in enforcing the country’s criminal and immigration laws and the constitutional liberty interest “of parents in the care, custody, and control of their children[,]” which “is perhaps the oldest of the fundamental liberty interests recognised by” the Supreme Court… Both of these interests are valid and important, and both can be served by the issuance of an injunction in this case.

As stated, the public’s interest in enforcing the criminal and immigration laws of this country would be unaffected by issuance of the requested injunction. The Executive Branch is free to prosecute illegal border crossers and institute immigration proceedings against aliens, and would remain free to do so if an injunction were issued. Plaintiffs do not seek to enjoin the Executive Branch from carrying out its duties in that regard.”

Thereafter, staying the policy, the Court issued the following directions:

(1) Defendants, and their officers, agents, servants, employees, attorneys, and all those who are in active concert or participation with them, are preliminarily enjoined from detaining Class Members in DHS custody without and apart from their minor children, absent a determination that the parent is unfit or presents a danger to the child, unless the parent affirmatively, knowingly, and voluntarily declines to be reunited with the child in DHS custody.

(2) If Defendants choose to release Class Members from DHS custody, Defendants, and their officers, agents, servants, employees and attorneys, and all those who are in active concert or participation with them, are preliminary enjoined from continuing to detain the minor children of the Class Members and must release the minor child to the custody of the Class Member, unless there is a determination that the parent is unfit or presents a danger to the child, or the parent affirmatively, knowingly, and voluntarily declines to be reunited with the child.

(4) Defendants must immediately take all steps necessary to facilitate regular communication between Class Members and their children who remain in ORR custody, ORR foster care, or DHS custody. Within ten (10) days, Defendants must provide parents telephonic contact with their children if the parent is not already in contact with his or her child.

(5) Defendants must immediately take all steps necessary to facilitate regular communication between and among all executive agencies responsible for the custody, detention or shelter of Class Members and the custody and care of their children, including at least ICE, CBP, BOP, and ORR, regarding the location and well-being of the Class Members’ children.

(6) Defendants, and their officers, agents, servants, employees, attorneys, and all those who are in active concert or participation with them, are preliminarily enjoined from removing any Class Members without their child, unless the Class Member affirmatively, knowingly, and voluntarily declines to be reunited with the child prior to the Class Member’s deportation, or there is a determination that the parent is unfit or presents a danger to the child.

(7) This Court retains jurisdiction to entertain such further proceedings and to enter such further orders as may be necessary or appropriate to implement and enforce the provisions of this Order and Preliminary Injunction.