SC to adjudicate on Kejriwal vs Centre power tussle; issues summons to MHA 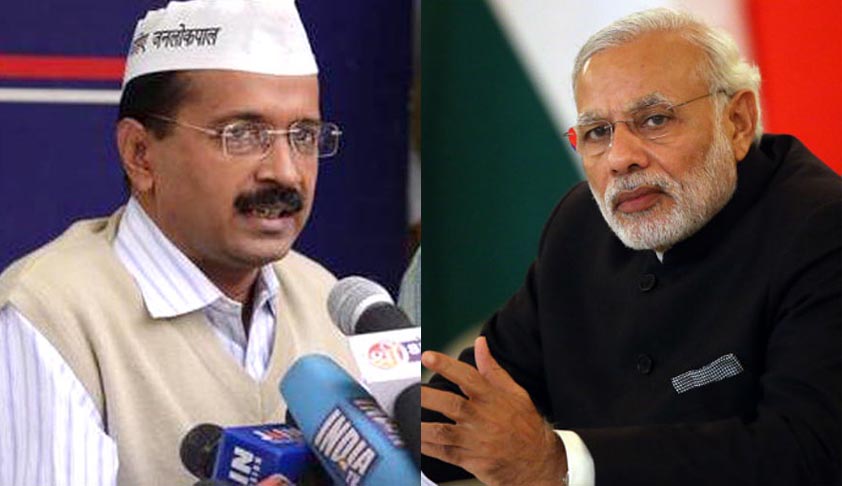 The Supreme Court has in a very significant decision admitted a petition filed by Delhi’s Kejriwal government--- under Article 131 of the Constitution - seeking a judicial declaration on the boundaries of the constitutional relationship between the Delhi government and the Centre, in administering the national Capital especially to clearly earmark each of their powers.

The Registry of the court issued summons to the Union of India “represented by the Secretary in the Ministry of Home Affairs” on May 11 and specified that the matter would be taken up after the apex court’s summer vacation ends on June 28.

This is following a sustained conflict between the AAP Government and the Centre through its Governor Najeeb Jungwho have been engaged in an intense power struggle ever since Kejriwal took over the reins of Delhi 15 months ago.

Delhi government moved the apex court under a rarely invoked provision - Article 131 of the Constitution - which vests exclusive jurisdiction with the Supreme Court over disputes between states of the Union and between the Union and its states.

Emphasising that it wants to ensure that day-to-day lives of people are not affected by the Centre-state conflict, the petition points out that the L-G had unprecedently declared void several orders issued by a democratically-elected government of Delhi.

From the appointment of public prosecutors, to the setting up of Commissions of Enquiry to look into instances of corruption and maladministration by public servants, the Union - acting through the Lieutenant Governor - has opposed most executive decisions taken by the government of NCT of Delhi, the Kejriwal government has told apex court.

LG had declared as void commissions of enquiry into CNG fitness scam and DDCA scam., Orders increasing salaries of DANICS officers have been declared void by LG, Anti-Corruption Branch restrained from registering FIRs against employees of Central Government for corruption, Tiff over appointment of Public Prosecutors and government counsels, Fight over control of Delhi Police, Delhi government not allowed to introduce bills in Delhi Assembly without LG’s approval, Delhi government not given say on transfer postings of Delhi bureaucrats

“We want to ensure that day-to-day lives of people are not affected by the centre-state conflict. The Lieutenant Governor has unprecedently declared void several orders issued by a democratically-elected government of Delhi” Kejriwal government told the Supreme Court

“From the appointment of public prosecutors, to the setting up of Commissions of Enquiry to look into instances of corruption and maladministration by public servants, the Union - acting through the Lieutenant Governor - has opposed most executive decisions taken by the government of NCT of Delhi, it said

FOLLOWING IS THE KEJRIWAL GOVERNMENT’S STATEMENT ON THE SUPREME COURT ORDER:

The Supreme Court, having taking cognizance of the Delhi government’s suit filed under Article 131 of the Constitution of India, has issued a summons to the Union of India (dated 11 th of May, 2016) to appear before it and respond the to claim made by the Delhi government, failing which the suit will be decided ex parte.

Article 131 of the Constitution of India vests exclusive jurisdiction with the Supreme Court of India over disputes between States of the Union and between the Union and its States. It is the stand of the NCT of Delhi that it is a State for the purposes of Article 131 and that the disputes arising between the NCT of Delhi and the Union of India can only be adjudicated upon by the Hon’ble Supreme Court. It is also the stand of the NCT of Delhi that as per Article 239AA of the Constitution, it has legislative and executive powers in relation to all the entries appearing in List II and List III of the Seventh Schedule of the Constitution, save and except for those that have been reserved for the Union by Article 239AA (3), i.e. Entries 1, 2, and 18 of List II and Entries 64, 65, and 66 of that List in so far as they relate to the said Entries 1, 2, and 18.

Petitions have been pending in the High Court of Delhi filed both by NCT of Delhi against Union of India, and by Union of India against NCT of Delhi. This only established the fact that the disputes are of a federal nature and the only court that has jurisdiction to hear and entertain the petitions is the Supreme Court. Accordingly, an application has been filed in the High Court to stay all further proceedings that court.

There have been major differences of opinion between the Union of India represented by the Lieutenant Governor on the one hand and NCT of Delhi on the other hand, relating to the nature and extent of their respective powers of governance.

The Government of NCT Delhi takes the view that having regard to the fact that it is a popularly elected government, it has sole and exclusive power to deal matters within its legislative competence without reference to Lieutenant Governor. On the other hand, the Lieutenant Governor has been acting in relation to subjects which are within the domain of the Government of NCT Delhi including the posting and transfer of public servants, registration of cases under the prevention of corruption act and prosecution of crime.

These and other similar controversies have affected the day to day functioning of the government of NCT Delhi and amount to a usurpation of powers of a democratically elected Government by the Centre.

It is in these circumstances, that NCT of Delhi has come to the conclusion that these questions relating to the distribution of legislative and (co-extensive) executive powers are questions that require to be resolved finally and conclusively by the Supreme Court of India so as to prevent any further disputes on the interpretation of the extent of the respective powers of NCT of Delhi and the Union of India.

These matters raise issues relating to the federal structure of the Constitution under which the Center and the States have plenary powers within their respective spheres. It is the contention of NCT Delhi that the Union of India is encroaching on its powers in exercising executive power.

It is the contention of NCT Delhi is the suit that the Supreme Court has exclusive jurisdiction to decide disputed relating to the constitutional relationship between the NCT of Delhi and Union of India, and no other court has jurisdiction to entertain such a dispute since it is a dispute between the Union and a State, and impacts the federal structure of the Constitution.