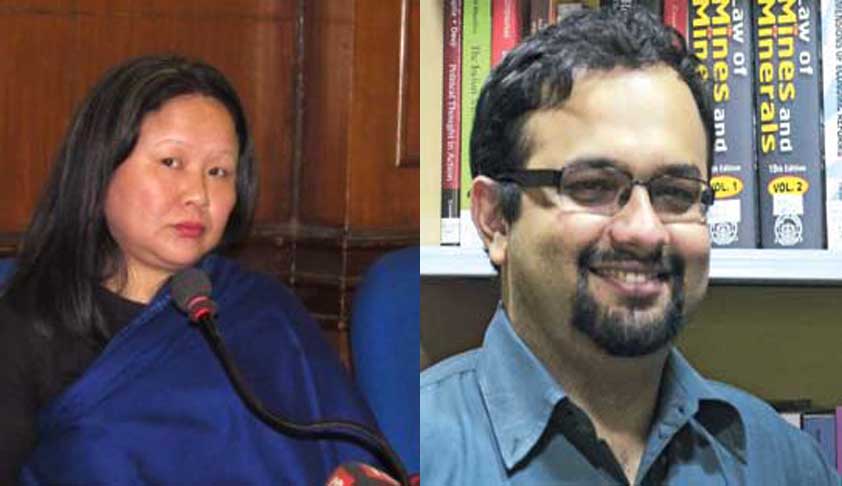 The Supreme Court’s dismissal of Dangwimsai Pul’s “petition” seeking a probe into the allegations mentioned in her husband, and former chief minister of Arunachal Pradesh, Kalikho Pul’s “suicide note”, as withdrawn, has led to a controversy.The Supreme Court, in its order, has defended its hearing of Dangwimsai Pul’s letter to the Chief Justice of India, Justice J.S.Khehar,...

The Supreme Court’s dismissal of Dangwimsai Pul’s “petition” seeking a probe into the allegations mentioned in her husband, and former chief minister of Arunachal Pradesh, Kalikho Pul’s “suicide note”, as withdrawn, has led to a controversy.

The Supreme Court, in its order, has defended its hearing of Dangwimsai Pul’s letter to the Chief Justice of India, Justice J.S.Khehar, in this connection on the judicial side, by converting it as a writ petition, as follows:

“This petition has been listed in pursuance of the order of Hon'ble The Chief Justice of India. In view of the fact that there are allegations in the Annexure to the petition against number of political persons and even the President of India, the matter was considered to be of public importance.”

During the hearing of the case on February 23, Dangwimsai Pul’s senior counsel, Dushyant Dave, had questioned precisely this, asking how the Court could hear it on the judicial side, when her plea was to deal with it on the administrative side. Firstly, he suggested that the CJI could not have chosen a bench to hear this case, as he has been named by Kalikho Pul in his “suicide note”.

Secondly, the fact that the names of CJI and the No.2 Judge in the Supreme Court could find place in the note by Kalikho Pul, would mean that the matter must have been dealt with in accordance with the Supreme Court’s judgment in K.Veeraswami v Union of India, delivered in 1991.

Dangwimsai Pul invoked the administrative jurisdiction of the Chief Justice of India, in terms of the Veeraswami judgment, as the police sat on her husband’s “suicide note”, without taking any further action on it, for the past six months.

Alok Prasanna Kumar, an advocate based in Bengaluru, and who has been a Senior Resident Fellow of the Vidhi Centre for Legal Policy, answers Livelaw’s questions on certain aspects of this controversy.

Alok is the author of the widely-read  newsletter, “The Contumacious Curmedgeon”, a hilarious weekly update on law, courts, and other institutions in India and elsewhere.

LIVELAW: The former Arunachal Pradesh CM, Kalikho Pul's so-called suicide notes has led to a turmoil in the Apex Court. As you observed in Quint in your recent piece, the SC appears to have messed up the entire issue, by hearing it on the judicial side. What difference it makes whether the Apex Court decides the issue on the administrative or judicial side? Can you explain?

ALOK PRASANNA KUMAR:The difference lies in the procedure being adopted. There is no requirement to give a full hearing to parties or to hold open court hearing for what is essentially an administrative order. Further, an order passed on the judicial side by a court with no jurisdiction is null and void. The Supreme Court had no jurisdiction to hear this “letter petition” since it was not filed as a writ petition nor was it listed for suo motu hearing. Any order passed would have been null and void. There was no legal dispute here or question of fact or law to be decided.

LIVELAW: Indian Express story on Friday (February 24) said that the Government doubts whether it can be called a suicide note, because Pul did not mention that he was going to commit suicide in that note. Therefore, what is its legal status?

ALOK PRASANNA KUMAR: Since there are no active legal proceedings going on in the context of the note, it would not be possible to say what the legal status of the note is. If any proceedings are begun, the note would have to be introduced as evidence and proved as having been written and authored by Kalikho Pul before his death. Until then it is just an ordinary document.

LIVELAW: Assuming it is a suicide note, can it be treated on par with a Dying Declaration? He wrote the note on August 8, 2016, and committed suicide the following day. Therefore, at the time of writing the note, was he under the influence of someone, who knew that he was going to die the next day, is the question that is likely to come up in the investigation. Also, why should anyone writing the note sign on every page, and counter-sign every correction? That seems very unusual.

LIVELAW:Which paragraph of Veeraswami judgment says that a matter like this must be dealt with on the administrative side? Does it rule out judicial side altogether?

ALOK PRASANNA KUMAR: Paragraphs 59-60 of the majority judgment in the Veerasami case (delivered by Justices Shetty and Venkatachaliah) make it clear that the CJI has to be “consulted” on beginning criminal proceedings against HC and SC judges and his opinion is binding on judges.

“If the Chief Justice of India himself is the person against whom the allegations of criminal misconduct are received the Government shall consult any other Judge or Judges of the Supreme Court. There shall be similar consultation at the stage of examining the question of granting sanction for prosecution and it shall be necessary and appropriate that the question of sanction be guided by and in accordance with the advice of the Chief Justice of India. Accordingly, the directions shall go to the Government. These directions, in our opinion, would allay the apprehension of all concerned that the Act is likely to be misused by the Executive for collateral purpose. ”

This is analogous to consultation with the CJI in the context of appointment of judges and cannot possibly be a judicial proceeding since this is not the opinion of the court but just the CJI. As the Court explained in Veeraswami's case this is just the CJI acting in his capacity as the head of the Indian judiciary and not the judgment or decision of a court.

ALOK PRASANNA KUMAR: I do not think so. There is no procedure under which an individual judge can be approached directly without approaching the CJI first in this context. The CJI doesn't have to take any decision but just forward the complaint to J Chelameswar for appropriate action.

LIVELAW: Do you think as Mrs.Pul’s counsel, Dushyant Dave erred in seeking the recusal of Justice Adarsh Kumar Goel. Many felt that the plea for recusal was the most effective strategy, because if the bench wanted to go ahead with the hearing, then the recusal plea would have been a hindrance. And as the order shows, the bench did ignore the recusal plea, and want to go ahead with the hearing, before Dave insisted on withdrawing.

ALOK PRASANNA KUMAR: Without commenting on the wisdom of the strategy in this case, I do not think it is fair to demand recusal from a judge in open court on the ground alleged by the petitioner in this case. Judges interact and work with each other daily and to deem this to make them automatically “biased” in favour of fellow judges is unfair. If the case should not have been heard on the judicial side at all, I am not sure what the point of demanding recusal of a judge is. By this line of reasoning, no judge of the SC can even take an administrative decision on the matter because they have “worked with” Justice Khehar.

ALOK PRASANNA KUMAR:No, he cannot be approached directly. If the petitioner approaches the CJI again, he should just forward the letter to J Chelameswar for action. I don't think there can be petition compelling him to act.

LIVELAW:If the administrative door of the Supreme Court is closed for Mrs.Pul, what would be her remedies?

ALOK PRASANNA KUMAR: It would be wrong to say the “administrative door” is closed since there is no res judicata in such matters. She can make a fresh request on the basis that her letter was not properly responded to and that it was not forwarded to the appropriate judge for action.

ALOK PRASANNA KUMAR: As per Section 197 of the CrPC and Section 19 of the PC Act, sanction is needed at the stage of the court taking “cognizance” ("i.e., when the court applies its mind to the case before it") of a crime. For a judge of the High Court or the Supreme Court, the authority to give sanction would be the President of India. This comes after the challan/charge sheet is filed in court post investigation and the trial court applies its mind to the question of whether accused has any case to be answered.

I wouldn't like to speculate on a total hypothetical about the CJI refusing permission or refusing to take a decision on this, but it would reflect very poorly on the institution if the CJI did so.

LIVELAW: Do you think Mrs.Pul ought to have withdrawn her petition on the judicial side, and insisted that as long as the response from the administrative side is not given to her, her original letter to the CJI could not be withdrawn. Now, she seems to have landed herself in an anomaly, by withdrawing her petition, which effectively means that there is nothing to decide on the administrative side either.

ALOK PRASANNA KUMAR: Exactly. I'm still trying to make sense of the order because she didn't “file” any case to withdraw it. If I were in her position, I would have only pointed out that the court has no jurisdiction to “hear” her petition and should return the letter to the CJI for his action and close the proceedings.

LIVELAW: Government sources have told the Indian Express, that they are not keen on probing the issue, because it could bring down the reputation of Constitutional functionaries. Do you think the Government has any role to play in this matter, if as you say, only the Supreme Court can initiate investigation, by granting permission on the administrative side?

ALOK PRASANNA KUMAR: To clarify: an FIR is only registered by the concerned police authorities. An individual only gives the information by oral or written statements. Ideally it should have been the concerned police/government which approaches the CJI for permission to register the FIR if they feel an offence has been committed on the basis of the material provided to them by Mrs Pul. The Supreme Court is not initiating investigation so much as just giving permission to just go ahead with investigation by the police.

LIVELAW: What was the outcome in the Veeraswami case?

ALOK PRASANNA KUMAR: Justice Veeraswami was eventually acquitted of all charges in 2003.