There Cannot Be Patriarchal Monarchy Over Daughter Or Husband’s Monarchy Over Wife: CJI Misra In Adultery Judgment [Read Judgment] 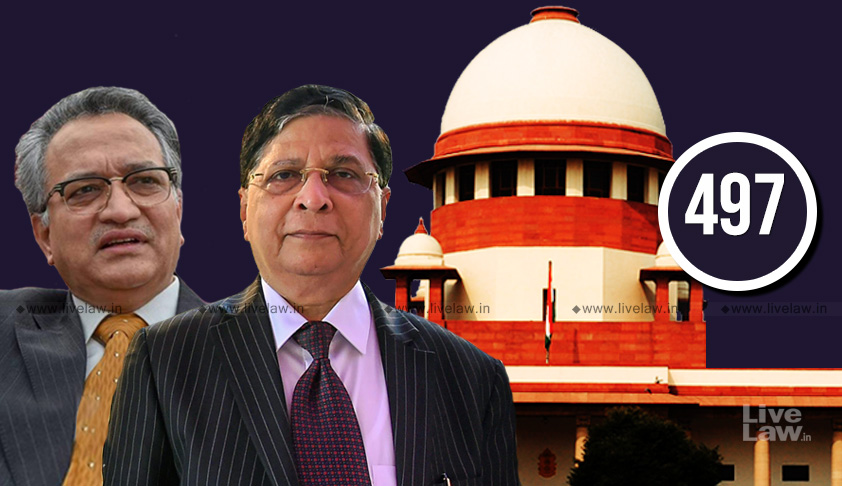 The Supreme Court on Thursday struck down as unconstitutional, 158-year-old Section 497 of the Indian Penal Code, which criminalizes adultery.The five-Judge Bench comprising Chief Justice of India Dipak Misra and Justices R F Nariman, AM Khanwilkar, DY Chandrachud, and Indu Malhotra also declared as unconstitutional Section 198 of the Criminal Procedure Code, which deals with the procedure...

The Supreme Court on Thursday struck down as unconstitutional, 158-year-old Section 497 of the Indian Penal Code, which criminalizes adultery.

The five-Judge Bench comprising Chief Justice of India Dipak Misra and Justices R F Nariman, AM Khanwilkar, DY Chandrachud, and Indu Malhotra also declared as unconstitutional Section 198 of the Criminal Procedure Code, which deals with the procedure for filing a complaint for the offence of adultery.

CJI Misra, writing for himself and Justice AM Khanwilkar, ruled, “We have already ascribed when such an act is treated as a crime and how it faces the frown of Articles 14 and 21 of the Constitution. Thinking of adultery from the point of view of criminality would be a retrograde step. This Court has travelled on the path of transformative constitutionalism and, therefore, it is absolutely inappropriate to sit in a time machine to a different era where the machine moves on the path of regression. Hence, to treat adultery as a crime would be unwarranted in law.”

Notably, the CJI, while writing for himself and Justice Khanwilkar, spoke about the changing times and the consequent change in the way women’s rights have evolved since. He wrote, “In such a situation, the essentiality of the rights of women gets the real requisite space in the living room of individual dignity rather than space in an annexe to the main building…

…A woman cannot be asked to think as a man or as how the society desires. Such a thought is abominable, for it slaughters her core identity. And, it is time to say that a husband is not the master. Equality is the governing parameter. All historical perceptions should evaporate and their obituaries be written.”

Examining the provision in the light of these ideals, he then highlighted the contrast that exists in the societal beliefs existing now and those which are being portrayed through the decades-old provision.

“On a reading of the provision, it is demonstrable that women are treated as subordinate to men inasmuch as it lays down that when there is connivance or consent of the man, there is no offence. This treats the woman as a chattel. It treats her as the property of man and totally subservient to the will of the master. It is a reflection of the social dominance that was prevalent when the penal provision was drafted,” he explained.

Here is a summary of the opinion authored by CJI Misra:

S.497 gives licence to husband to deal with wife as he pleases

The CJI pointed out that the definition of “person aggrieved” under Section 198 CrPC, which treats the husband of the woman as deemed to be aggrieved by an offence committed under Section 497 IPC and in the absence of husband, some person who had care of the woman on his behalf at the time when such offence was committed with the leave of the court. The provision does not consider the wife of the adulterer as an aggrieved person.

The definition, it then ruled, was “absolutely and manifestly arbitrary”, opining that it confers a licence on the husband to deal with the wife as he likes. It pointed out that while the provision does not treat a woman as an abettor but protects her, it does not enable the wife to file any criminal prosecution against the husband.

Ruling that it, therefore, violates Article 14, the court observed, “Indubitably, she can take civil action but the husband is also entitled to take civil action. However, that does not save the provision as being manifestly arbitrary. That is one aspect of the matter. If the entire provision is scanned being Argus-eyed, we notice that on the one hand, it protects a woman and on the other, it does not protect the other woman. The rationale of the provision suffers from the absence of logicality of approach and, therefore, we have no hesitation in saying that it suffers from the vice of Article 14 of the Constitution being manifestly arbitrary.”

Dent in the individual dignity of women

The court examined various precedents to elaborate on the concept of gender equality. In the same leaf, speaking about the necessity to pave way for equal dignity to women, it asserted, “…there cannot be a patriarchal monarchy over the daughter or, for that matter, husband‘s monarchy over the wife. That apart, there cannot be a community exposition of masculine dominance.”

Examining the impugned provision, the court then opined that the provision effectively creates a dent in the individual dignity of women, and hence violates Article 21 of the Constitution of India. This is especially because the provision exempts women from punishment for adultery, making it a patriarchal baggage which treats women as ‘chattel’ having no agency. The provision also exempts sexual acts with the wife of another man, if they are performed with the consent or connivance of that man—an exemption clearly an affront to personal dignity.

“…the Court, with the passage of time, has recognized the conceptual equality of woman and the essential dignity which a woman is entitled to have. There can be no curtailment of the same. But, Section 497 IPC effectively does the same by creating invidious distinctions based on gender stereotypes which creates a dent in the individual dignity of women. Besides, the emphasis on the element of connivance or consent of the husband tantamounts to the subordination of women. Therefore, we have no hesitation in holding that the same offends Article 21 of the Constitution,” the court explained.

Different from other criminal matrimonial offences

The CJI also elaborated on how adultery is different from an offence committed under Section 498-A or any violation of the Protection of Women from Domestic Violence Act, 2005 or, the protection conceived of under Section 125 of the Code of Criminal Procedure or Sections 306 or 304B or 494 IPC.

He then asserted that treating adultery as an offence would tantamount to the State entering into a real private realm. He further explained, “A situation may be conceived of where equality of status and the right to file a case may be conferred on the wife. In either situation, the whole scenario is extremely private. It stands in contradistinction to the demand for dowry, domestic violence, sending someone to jail for non-grant of maintenance or filing a complaint for second marriage. Adultery stands on a different footing from the aforesaid offences.”

Besides, he opined that treating it as a criminal offence violates two facets of Article 21 of the Constitution, namely, dignity of husband and wife, as the case may be, and the privacy attached to a relationship between the two. The other offences, it says, do not enter into the private realm of a matrimonial relationship.

The court took note of the fact that in case of adultery, the law expects the parties to remain loyal and maintain fidelity throughout. This expectation by law, it opined, is a command which gets into the core of privacy.

It further asserted that when the parties to a marriage lose their moral commitment of the relationship and it creates a dent in the marriage, it will and should depend upon the parties as to how they deal with the situation. This, it said, is “a matter of privacy at its pinnacle”.

If the act is treated as an offence and punishment is provided, it would tantamount to punishing people who are unhappy in marital relationships and any law that would make adultery a crime would have to punish indiscriminately both the persons whose marriages have been broken down as well as those persons whose marriages are not. A law punishing adultery as a crime cannot make a distinction between these two types of marriages. It is bound to become a law which would fall within the sphere of manifest arbitrariness.”

Additionally, the court looked into the jurisprudence in England, noting that it has never regarded adultery as a crime except for a period of ten years in the reign of Puritanical Oliver Cromwell. Further, noting that most countries have abolished criminalisation of adultery, it then opined that India should take the same path. The court, therefore, declared the impugned provisions unconstitutional.