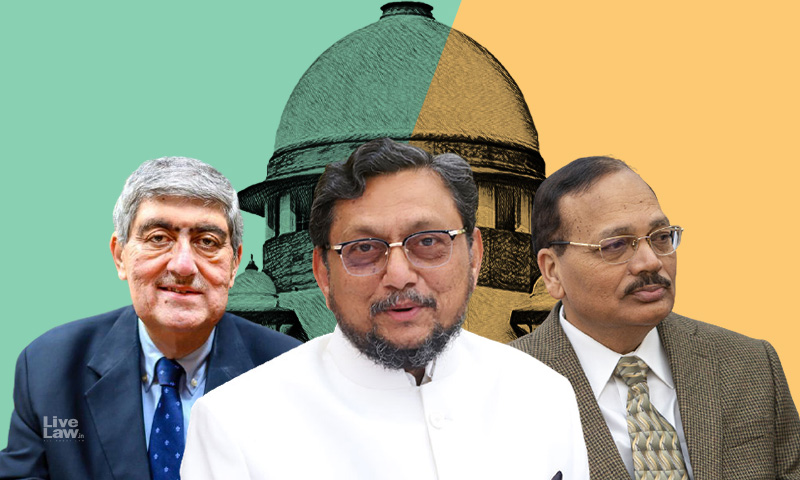 The Supreme Court on Monday passed a slew of guidelines regarding the appointment of ad-hoc judges in High Courts under Article 224A of the Constitution.A bench comprising Chief Justice of India SA Bobde, Justices Sanjay Kishan Kaul and Surya Kant passed the judgment in the case Lok Prahari vs Union of India. Lok Prahari, an NGO, had approached the Top Court through a PIL filed under Article...

The Supreme Court on Monday passed a slew of guidelines regarding the appointment of ad-hoc judges in High Courts under Article 224A of the Constitution.

A bench comprising Chief Justice of India SA Bobde, Justices Sanjay Kishan Kaul and Surya Kant passed the judgment in the case Lok Prahari vs Union of India. Lok Prahari, an NGO, had approached the Top Court through a PIL filed under Article 32 seeking the invocation of Article 224A to tackle the problem of mounting case arrears in High Courts.

The bench had reserved orders on the case on April 15, after hearing the suggestions made on behalf of different High Courts.

Article 224A enables a Chief Justice of a High Court, with the previous consent of the President, to request a former High Court judge to "sit and act as a judge" of the High Court to hear cases. The provision has been invoked very rarely in the judicial history of India.

While agreeing that the discretion of the High Court Chief Justice cannot be curtailed, the bench said that certain general guidelines are needed so that the power under Article 224A is exercised in a transparent manner.

Trigger point to activate Article 224A

The Supreme Court has laid down 5 trigger points which can activate the process under Article 224A.

a.If the vacancies are more than 20% of the sanctioned strength.

b.The cases in a particular category are pending for over five years.

c.More than 10% of the backlog of pending cases are over five years old.

d.The percentage of the rate of disposal is lower than the institution of the cases either in a particular subject matter or generally in the Court.

e. Even if there are not many old cases pending, but depending on the jurisdiction, a situation of mounting arrears is likely to arise if the rate of disposal is consistently lower than the rate of filing over a period of a year or more

Ad-hoc appointments cannot be a substitute for regular appointments; recommendations must be made for at least 20% regular vacancies to invoke Article 224A

The Supreme Court emphasized that ad-hoc appointments cannot be a substitute for regular appointments. The objective is not to appoint ad-hoc judges instead of judges to be appointed to the regular strength of the High Court.

"We also have no doubt that we would not like to encourage an environment where Article 224A is sought as panacea for inaction in making recommendations to the regular appointments", the court said in the judgment.

"...the recourse to Article 224A is notan alternative to regular appointments. In order to emphasise this aspect, we clarify that if recommendations have not been made for more than 20% of the regular vacancies then the trigger for recourse to Article224A would not arise"

In order to prevent such a situation, the Court held that Article 224A can be resorted to only on the process having being initiated for filling up of the regular vacancies and awaiting their appointments. There should not be more than 20% of the vacancies for which no recommendation has been made for this Article to be resorted to.

"In order to emphasise this aspect, we clarify that if recommendations have not been made for more than 20% of the regular vacancies then the trigger for recourse to Article224A would not arise", the Court observed.

a.Past performance of recommendees in both quality and quantum of disposal of cases should be factored in for selection as the objective is to clear the backlog.

b.The Chief Justice should prepare a panel of Judges and former Judges. Naturally this will be in respect of Judges on the anvil of retirement and normally Judges who have recently retired preferably within a period of one year. However, there can be situations where the Judge may have retired earlier but his expertise is required in a particular subject matter. There may also be a scenario where the Judge(s) may prefer to take sometime off before embarking upon a second innings albeit a short one. In the preparation of panel, in order to take consent and take into account different factors, a personal interaction should be held with the Judge concerned by the Chief Justice of the High Court.

The Court noted that paragraph 24 of the Memorandum of Procedure for the appointment of judges deal with the process under Article 224A. While saying that the MoP has no force of a 'law' laid down by the Court under Article 141, the bench said that as a starting point, this process can be followed.

As per this procedure, the Supreme Court collegium is not involved in the appointment of ad-hoc judges. Paragraph 24 of the MoP is as follows : 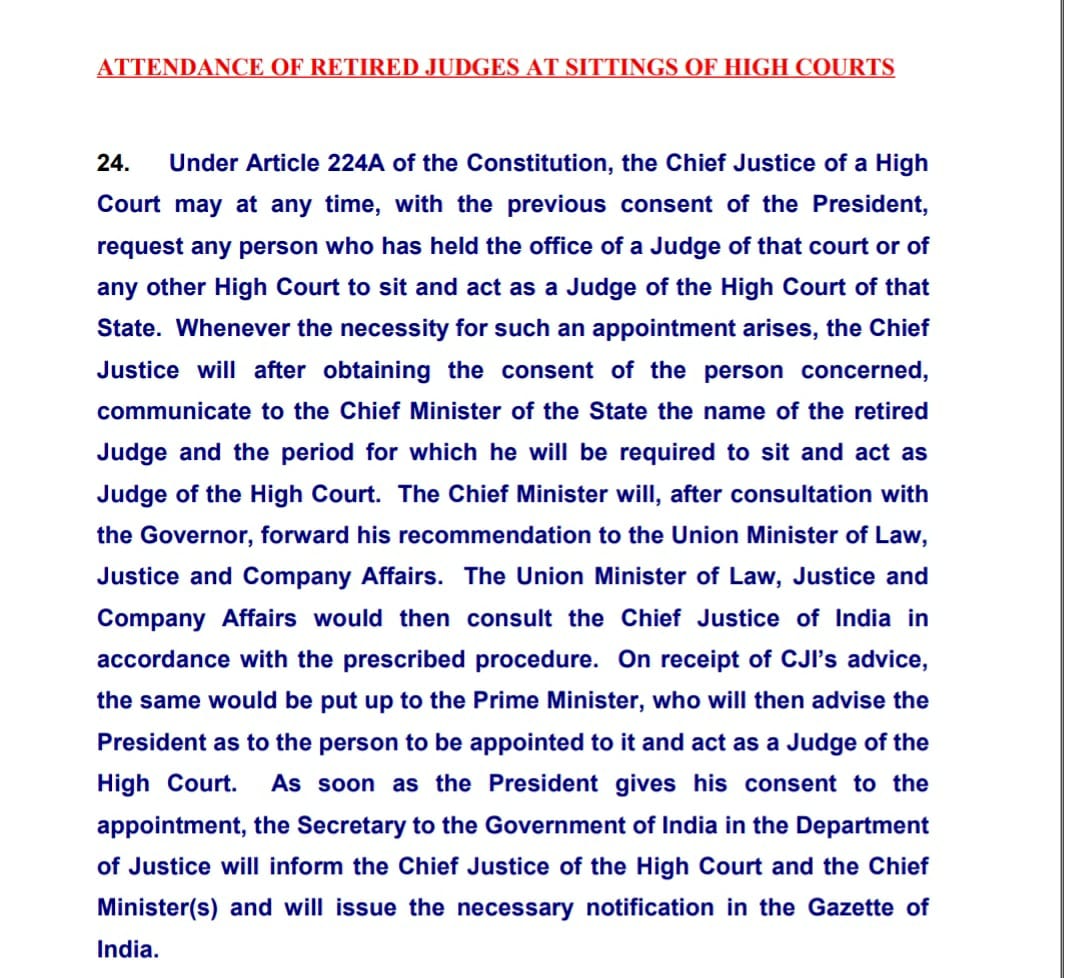 The Court also held that reference to IB or other agencies will not be required in the case of ad-hoc judges.

"We may, however notice that since the Judges are already appointed to the post through a warrant ofappointment, the occasion to refer the matter to the IB or other agencieswould not arise in such a case, which would itself shorten the time period."

Time to complete the process

The Court observed that a period of three months would be sufficient to complete the appointment process.

"In view of number of aspects not required to be adverted to for appointment under Article 224A we are of the view that a period of about three months should be sufficient to process a recommendation and, thus, ideally a Chief Justice should start the process three months in advance for such appointment"

Generally the appointment should be for a period between two to three years.

The number of ad hoc Judges should be in the range of two to five in a High Court.

The primary objective being to deal with long pending arrears,the said objective will be subserved by assigning more than five year old cases to the ad hoc Judges so appointed. However, this would not impinge upon the discretion of the Chief Justice of the High Court, if exigencies so demand for any particular subject matter even to deal with the cases less than five years old, though the primary objective must be kept in mind.

A division bench only of ad-hoc judges can also be constituted to hear old cases.

The Court also held that it would not be permissible for an ad hoc Judge to perform any other legal work whether it be advisory, of arbitration or appearance.

The emoluments and allowances of an ad hoc Judge should be at par with a permanent Judge of that Court at the relevant stage of time minus the pension. This is necessary to maintain the dignity of the Judge as also in view of the fact that all other legal work has been prohibited.

The emoluments to be paid would be a charge on the Consolidated Fund of India consisting of salary and allowance.

As far as housing accommodation is concerned, either the rent-free accommodation should be made available or the housing allowance should be provided on the same terms and conditions. For all practical purposes the ad hoc Judge would receive the same emoluments, allowances and benefits as are admissible to the permanent/additional Judge.

The case has not been completely disposed and an interim order in the nature of a "continuing mandamus" has been passed.

The matter will be next considered after four months. The Union Ministry of Law and Justice has been asked to file a report by then regarding the progress.

"We have taken the first step with the hope and aspiration that all concerned would cooperate and retiring/retired Judges would come forth and offer their services in the larger interest of the Judiciary. The guidelines cannot be exhaustive and that too at this stage. If problems arise, we will endeavour to iron them out. We must set aside apprehensions, if any, to chart this course and we are confident that there will be a way forward".

The bench had held elaborate discussions with various Senior Advocates representing the High Courts in the matter. Senior Advocate Arvind P Datar, appearing for the Orissa High Court, had submitted a written note based on the discussions with other lawyers involved in the matter(the note of suggestions may be read here). The bench took note of the suggestions in the note and the stand of the Union of India while issuing the directions.

The bench rejected the stand of the Union of India that ad-hoc appointments can be made only after regular vacancies are filled.

"We are unable to accept the plea of the learned Attorney General that though the Government of India may not have any in principle opposition to the aforesaid, first the existing vacancies should be filled in. In our view, this would be a self-defeating argument because the very reason why at present Article 224A has been resorted to is non-filling up of vacancies and the mounting arrears", the Court observed.

Title : Lok Prahari through its General Secretary V N Shukla IAS (Retd) vs Union of India and others