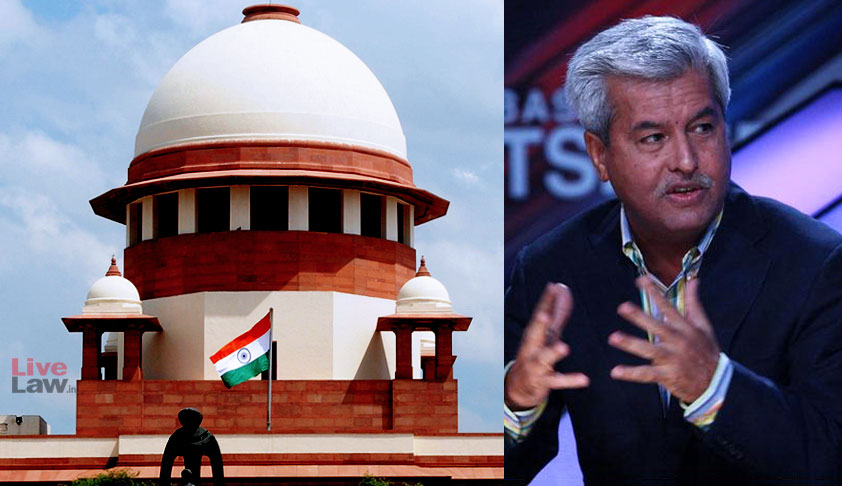 Senior Advocate and former President of Supreme Court Bar Association Dushyant Dave has written a letter to the Chief Justice of India alleging that cases with high commercial stakes for Adani group were irregularly listed before a particular bench in violation of the Supreme Court practice and procedureThe letter begins with statements made by four judges, including the present CJI Ranjan...

The letter begins with statements made by four judges, including the present CJI Ranjan Gogoi, during the press conference of January 2018 that "there have been instances where cases having far reaching consequences for the nation and the institution have been assigned by the Chief Justices of this Court selectively to the benches of 'their preference' without any rationale basis for such assignment".

Lamenting that the administration of the Supreme Court has worsened even after the public outcry by four senior judges, Dave cited two cases of Adani group, which were listed  during before vacation bench during recent summer break, allegedly in violation of the SC procedure.

Despite there being no special urgency in the matter, these two cases were hastily heard and disposed of by the vacation bench in May 2019, ignoring the requests for adjournments made by counsel for the parties, alleged Dave's letter, which is now being widely circulated among lawyer groups.

The first cited case is a 2018 civil appeal by Parsa Kenta Collieries Ltd, which is a part of Adani group, filed against a Rajasthan High Court judgment in favor of Rajasthan Rajya Vidyut Utpadan Nigam Ltd (Civil Appeal 9023 of 2018).

As per the letter, though the special leave for the appeal was granted only in August 24, 2018, the matter was listed during summer vacation for hearing. Dave referred to the entries stated to have been made by the Registrar R K Goel on March 14, 2019 that the case was not ready for hearing.

On May 21 and 22, the bench of Justices Arun Mishra and M R Shah heard Senior Advocate Ranjit Kumar and Solicitor General Tushar Mehta in the matter and reserved judgment.

"I am informed that the other counsels appearing in the matter were neither informed nor their consent was obtained for the same", Dave said.

"Did the bench inquire into its urgency? Seems not. Did the bench take up other matters for hearing which were older and urgent? Seems unclear", he remarked.

The second case mentioned by Dave is a 2011 civil appeal titled Adani Power (Mundra) Ltd vs Gujarat Electricity Regulatory Commission and others(Civil Appeal 11133 of 2011).  On May 23, the same bench entertained a 2019 petition filed for early hearing of the matter, and listed the case for hearing the next day.  The previous listing of the case was in February 2017.

On May 24, the bench of Justices Arun Mishra, B R Gavai and Surya Kant reserved arguments in the case after hearing Senior Advocate Gopal Jain for the appellant and Senior Advocate M G Ramachandran for the respondent.

Quoting Ramachandran, Dave stated that on May 23, the Advocate on Record for the respondent had made a request for not taking up the matter during the vacation citing the unavailability of the Senior Advocate who was briefed in the case. Rejecting this request, the bench listed the case for final hearing the next day. Even on May 24, a request for adjournment was made on behalf of the respondent. But the bench chose to hear the case straightaway, stated the letter.

The Court ultimately granted relief to Parsa Kenta and Adani Power in both the matters.

"I am told that the total benefit to this Corporate Client from these two judgments will run into thousands of crores", Dave said. He disclosed in the letter that he had appeared as a lawyer for Adani group in past, including in the case of Parsa Kenta Collieries before Rajasthan HC.

"Clearly, hearing and disposal of these two appeals have been done in complete contravention of the settled practice of the Supreme Court as also its established procedure. Both these matters were listed, taken up and heard without any justification, and in hurry and in an improper manner. As a result, besides causing grave injury to public interest and public revenue, it has caused immense damage to the image of the Supreme Court and the administration of justice.

It is disturbing that the Supreme Court of India should take up regular matters of a large corporate house during summer vacation in such a cavalier fashion and decide them in its favour", he said.

But most of all, why were the two matters listed before the bench presided by Hon'ble Mr Justice Arun Mishra when other benches were available during May 2019 vacation?

And why did this Bench take up the same", he asked.

Apart from these two, Dave cited two other cases involving Adani group, which were listed and heard by benches headed by Justice Mishra.

On January 29, 2019, the bench of Justice Mishra and Navin Sinha decided the civil appeal Adani Gas Ltd v Union of India (Civil Appeal 1261 of 2019). According to Dave, the subject category of the case - appeals against orders of statutory bodies - was assigned to another bench presided by bench of Justice Sikri as per the roster published on July 2, 2018.  Despite that, the matter was listed on July 4, 2018 before the bench of Justices Mishra and Sinha and was ultimately decided on January 29, as per Dave's letter.

It is further mentioned that on May 2, 2019, the bench of Justice Arun Mishra and Abdul Nazeer dismissed the appeal of Tata Power Company Ltd against Adani Electricity, Mumbai Ltd (Civil Appeal No.415 of 2007), directing payment of money payable by TPC to Reliance Energy Ltd to Adani Ltd.

"Handbook of practice and procedure published by the Supreme Court shows that matters ought to have been listed before available coram judges from previous benches. Why was this practise followed is a mystery. Did the registry play foul in this regard?", Dave asked.

He clarified that he was not questioning the merits of the judgments in the cases but was only pointing out the procedural irregularities in the bench headed by Justice Arun Mishra taking up these matters.

Contextually, the letter referred to the observations made by Justice Arun Mishra while hearing the suo moto petition "In Re : The matter of great public importance touching upon the independence of judiciary" .

While hearing the suo moto case registered following the sexual harassment allegations against CJI Gogoi, Justice Mishra had observed that the 'fixers' cannot be allowed to have place in the Supreme Court registry.

Dave also made references to the press conference made by four sitting SC where allegations regarding "selective assigning of cases to benches of preference" were made. Incidentally, the assignment of the PIL seeking probe into the death of CBI judge Loya to the bench headed by Justice Mishra was one of trigger points for the press conference, as told by CJI Gogoi to the media then.

In conclusion, Dave said that it was his duty as an officer of the Court to draw the attention of the CJI to these happenings.

Citing the example of the first CJI HJ Kania recalling certain judgments passed by Justice K N Singh following outcry by members of the bar and the then Attorney General regarding the questionable manner in which favours were given to a particular business house, Dave urged the CJI to take corrective steps 'as deemed appropriate to protect the institution'.