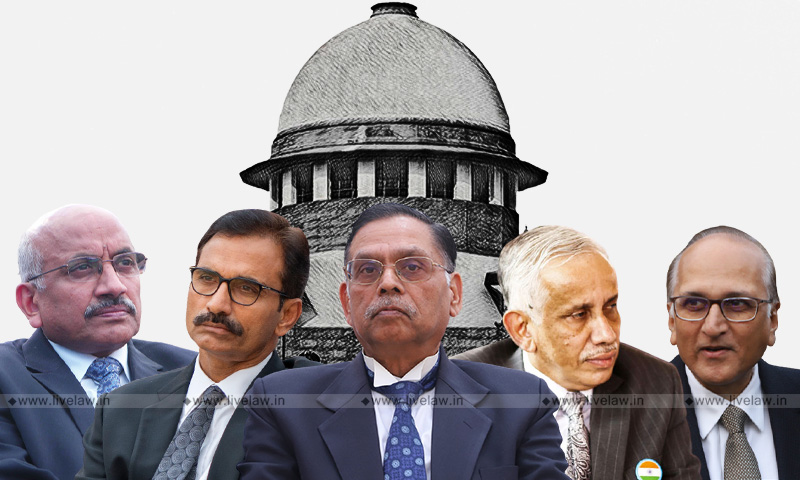 On the sixth consecutive day of the hearing in the Maratha quota case, a Constitution Bench of the Supreme Court made observations regarding the need to move beyond reservations for the purposes of affirmative action."Affirmative action is not limited to reservation only", Justice S Ravindra Bhat, part of the 5-member bench, observed while hearing the arguments of Senior Advocate Kapil Sibal,...

On the sixth consecutive day of the hearing in the Maratha quota case, a Constitution Bench of the Supreme Court made observations regarding the need to move beyond reservations for the purposes of affirmative action.

"Affirmative action is not limited to reservation only", Justice S Ravindra Bhat, part of the 5-member bench, observed while hearing the arguments of Senior Advocate Kapil Sibal, who is supporting the Maharashtra State Reservation For Socially and Educationally Backward Classes (SEBC) Act which provides for a quota to Marathas in jobs and education.

"Other things can also be done. Why not promote education and establish more institutes? Somewhere this matrix has to move beyond reservation. Something more must be done", Justice Bhat continued.

Justice Ashok Bhushan, the presiding judge of the bench, made comments regarding the need to balance the right to equality under Article 14 of the Constitution and reservation.

On the previous day of hearing, the bench had asked for how many generations would reservations in jobs and education continue. The bench had also sought to know if the removal of 50% limit on reservation will affect the right to equality under Article 14 of the Constitution and would lead to a "resultant inequality".

"If there is no 50% limit, what is the concept of Article 14 then? What would happen to the resultant inequality and for how many generations will this continue?", the bench had asked Senior Advocate Mukul Rohatgi, who was pleading for a reconsideration of the 50% cap imposed by the Inidra Sawhney judgment.

The detailed account of the Day 6 of hearing before the the bench comprising Justices Ashok Bhushan, L. Nageswara Rao, S. Abdul Nazeer, Hemant Gupta and S. Ravindra Bhat is given below.

The bench heard the submissions of Senior Advocates Paramjit Patwalia, Shekhar Naphade and Kapil Sibal, who were arguing in support of Maratha quota.

In today's hearing, Patwalia resumed his submissions on the efficacy of the Gaikwad Commission report and informed the Court that multiple public hearings had been conducted to gauge the reaction of people to the proposal for reservations for Marathas.

"For Mumbai, public hearings were first held at CBT, Belapur and Thane on July 13. A huge number of representations were also sent which stated that submissions had not been made and in order to accommodate the remaining number of representations, an extra hearing took place at an office in Mumbai for which intimation was given. There was no compliant about anyone being prevented to testify", submitted Patwalia.

To this, Justice Rao posed the question as to why there had been no opposition if publicity had been given – "It could have been that people may have not known if Maratha reservations were an addition to or a part of the 27% reservations. 90% respondents were Marathas." Justice Bhat also added that the terms of reference never stated that it would be a separate quota and that the people in the General quota would have the presumption that a 50% limit would be there.

Patwalia then argued that the Gaikwad Commission was not packed with Marathas and that the earlier reports had been adequately considered. The Bombay High Court had also taken cognizance of the same.

In response to questions about the Kalelkar Commission, Patwalia responded, "The State set up a new Commission which did not find them [Marathas] as SEBCs. Centre did not accept the Kalelkar report. This is why there were protests. The Deshmukh Committee, which said that Kunbis appeared in the OBC category, noted that Marathas and Kunbis were two sides of the same coin. That is how Marathas started feeling resentment as they felt they were being left out".

Patwalia also underlined the fact that the huge population of Marathas and the small quota available created an "extraordinary circumstance" which validated the breaching of the 50% limit, and that this was the only harmonious solution available as sharing the well-established reservation limit would be catastrophic.

"The reservation would have been a complete illusion. And this was done to make it real, and not illusory", submitted Patwalia. This was opposed by the Bench who noted that merely because a community was in a far-flung area, it would not entitle them to reservation as per Indra Sawhney, and other conditions, such as remoteness leading them to being out of mainstream life and peculiar nature of being, would also need to be satisfied.

Patwalia then concluded his arguments by stating, "Court should keep in mind that in cases like these, it is the subjective satisfaction of the State which the Court is putting to scrutiny. A community should be given an opportunity to uplift itself. Studies should be done from time to time to ascertain backwardness".

Naphade commenced his submissions by stating that the Gowda Committee and the State had not applied appropriate parameters for deciding the interests of the Maratha community, and that the Court could not sit in judicial scrutiny over the subjective satisfaction of the government in such issues.

"There is no justification as to how they [the Court] ended up at 50% limit. Further, finding of the Court that reservation was not required was not necessary to finally decide the case. This takes us to the question on how to identify the ratio from the obiter", submitted Naphade.

He then contended that reasonableness regarding limit on reservations could not be decided based on abstracts as had been done in the MR Balaji decision. Reliance was further placed on the judgement of Justice Sawant in the Indra Sawhney judgment in order to put forth the observation that there could be no ceiling on reservations.

Naphade concluded by submitting that in light of the diversity of views of different Judges on the 9-Judge Bench, there was a requirement to refer the matter to a larger Bench.

Sibal initiated his submissions by stating that the matter was of great importance because what the Court would decide would end up securing the future of millions of people who belong to the backward classes.

"This is the first time a Court is looking at these issues after Indra Sawhney. Also, you cannot look at Articles 15(4) and 16(4) in abstract. Because reservation is not an abstract concept. We also need to look into who can fix limits. Percentages per se are not within the scope of judicial review", stated Sibal.

Sibal then contended that the Indra Sawhney judgment did not consider the Mandal Commission report and that a limit could not be set on empowerment. He noted that the report had been critiqued by the majority and all it did was fix a limit for SEBCs at 50%.

"I will delineate the parameters of Article 15 and 16. While 15 is about empowerment, 16 is about employment. While 15 deals with the ability to become eligible for jobs, Art. 16 deals with getting jobs once you're eligible. Breach of 50% is not relevant for Article 15. How can a Court fix 50% for empowerment?"

It was underlined by Sibal how fixing percentages was not a part of judicial function. He submitted that India was not a uniform country, but it was very diverse with every State containing multitudes of diversity in itself.

"There's no one size fits all answer here. Concept of equality will differ from one State to another. Backward classes in one State will be different from another State. You cannot straitjacket it. You can't take into account the All-India figure".

At this juncture, Justice Bhat asked Sibal whether the 2011 census portrayed the OBC population separately to which Sibal responded that the 2011 census was not out. To this, Justice Bhat observed, "This is extrapolation then. Census does not carry caste-based census. It has been prohibited since 1931. From where have you figured out the data of persons belonging to the OBC category. Kindly submit the handbook, we will look into it."

Sibal then provided data pertaining to the Gross Enrolment Ratio (88% for USA and 28% for India) and submitted that there was a difference between developed and developing countries.

"For a developed country, we need enough students to start going to schools and colleges. Why do we have Kendriya Vidyalaya schools? It is 100% for government servants. Kasturba Gandhi Balika Vidyalaya is for girls only. There is nothing wrong with that. If the government provides 60-70% reservation, the Court can strike it down. But, it cannot say that it must be fixed at 50%".

Justice Bhat then observed that affirmative action could not be limited to reservations – "Other things can also be done. Why not promote education and establish more institutes? Somewhere this matrix has to move beyond reservation. Something more must be done".

Sibal agreed that the same had to be done by the States and then submitted that the need for education to be promoted was so that opportunities were not squandered due to lack of eligibility. He presented data on the number of SC/ST/OBC vacancies in employment.

It was further averred that the Indra Sawhney judgment categorically dealt with the Office Memorandum and not the Mandal Commission report.

"The Court was only dealing with the OM. What the OM did was give effect to respective State lists. The Court ruled that the lists would be valid and enforceable. Indra Sawhney said that a balance had to be struck. The 50% was meant to be a judicial exercise to balance power; to put a quietus on a tumultuous situation. No judgement before Indra Sawhney ever said that above 50% was bad. What was buried in the Mandal report by a 9-Judge Bench, was resuscitated by others".

He submitted that the Indra Sawhney judgement replaced the term caste for class in Article 16(4) and this could not be taken as a gospel truth for the fixing of an upper limit for reservation.

The matter will continue tomorrow, with Senior Advocate Kapil Sibal resuming his submissions.