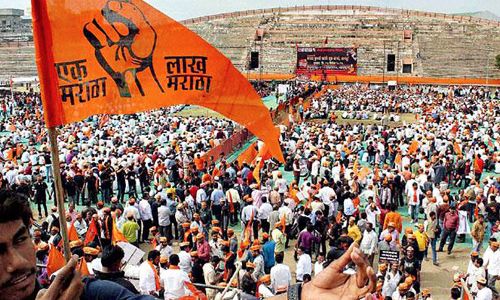 The Bombay High Court on Thursday upheld the validity of reservation granted to the Maratha community by the state government under the socially and educationally backward class category (SEBC) in government jobs and educational institutions.However, the Court has held that 16% reservation is not justifiable and ruled that reservation should not exceed 12% in employment and 13% in education...

The Bombay High Court on Thursday upheld the validity of reservation granted to the Maratha community by the state government under the socially and educationally backward class category (SEBC) in government jobs and educational institutions.

The Division Bench of Justies Ranjit More and Bharati Dangre dismissed the petition filed challenging the Maratha Reservation Act (Maharashtra State Reservation (of Seats for Admission in Educational Institutions in the State and for Appointments to the Posts in the Public Services under the State) for Socially and Educationally Backward Category (SEBC) Act, 2018 (SEBC Act)) passed by the the State Legislative Assembly on November 29, 2018 granting reservation for Marathas.

Court had reserved the judgment after hearing submissions in the case for over a month. Division bench of Justices Ranjit More and Bharati Dangre had given a patient hearing to all the petitioners who had challenged the constitutional validity of the said reservation as well as the intervenors and the state government, who argued in support of the reservation.

During the course of the hearing, the bench had examined the recommendations of the Maharashtra State Backward Class Commission comprising of nine members headed by Justice MG Gaikwad. MSBCC had conducted a survey of around 43,000 Marathas, who constitute around 30% of the State's total population. This survey was conducted by five expert institutes.

Senior Advocate Shrihari Aney appeared on behalf of petitioner Uday Dhople and Senior Advocate Arvind Datar also appeared on behalf of one of the petitioners in the case. Apart from this, there are three other PILs tagged along with this matter, including the one filed by People's Health Organisation, and four intervention applications in support of the said legislation.

Datar submitted that the said quota for Marathas was in violation of Article 15 (prohibition of discrimination on grounds of religion, race, caste, sex or place of birth) and Article 16 (equality of opportunity in matters of public employment) of the Indian Constitution.

"Only the President of India can notify or de-notify a list for backward classes whether at the Central or in the State. So, if the State decided to de-notify a category, the entire process of notification will have to take place again. Article 14 states reservation for any particular community violates class reservation and prohibits class legislation as it is not a natural differentiator"

Aney submitted- "No one can say I belong to Socially and Economically Backward Class (SEBC) as it is a 'class' and not a 'caste' as it is unknown and alien to the Indian Constitution. I am challenging the constitutional validity of the SEBC and seeking for it to be struck down."

Advocate Pradeep Sancheti, appearing for one of the petitioners in the case argued that the five 'expert institutes' that had been appointed by the State Backward Classes Commission to conduct a survey on the educational and economic backwardness of the Maratha community in western Maharashtra, Konkan, Marathwada, Vidarbha and north Maharashtra regions lacked the 'technical expertise' to conduct such a survey. He also alleged that three of these institutes were 'politically connected.'

Also, no such survey was conducted in Mumbai even though 20 percent of Maratha community lives here.

Senior Advocates Mukul Rohatgi, VA Thorat and Anil Sakhare appeared on behalf of the State and argued in favour of the reservation. They pointed out how the Supreme Court's 50% cap on the reservation could be breached in exceptional circumstances