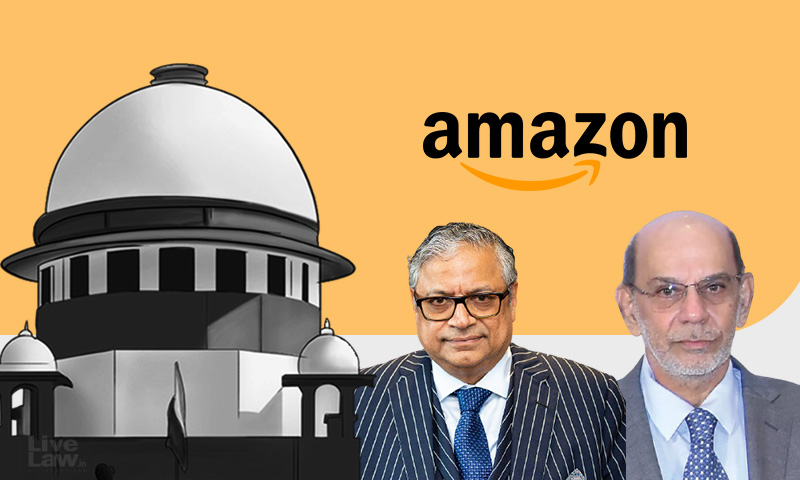 x
"Why would be not interested in the survival of this entity when we have rights under the agreement?" Subramanium submitted.

In the Future- Amazon dispute, the lawyers of the American e-commerce giant argued before the Supreme Court that Future Retail Ltd (FRL) and Futur Coupons Private Ltd (FCPL) have repeatedly violated the injunction orders passed by the Emergency Arbitrartor and hence, they cannot seek reliefs from the Court..Senior Advocate Gopal Subramaniam, appearing for Amazon, argued that the process...

In the Future- Amazon dispute, the lawyers of the American e-commerce giant argued before the Supreme Court that Future Retail Ltd (FRL) and Futur Coupons Private Ltd (FCPL) have repeatedly violated the injunction orders passed by the Emergency Arbitrartor and hence, they cannot seek reliefs from the Court..

Senior Advocate Gopal Subramaniam, appearing for Amazon, argued that the process adopted by the Future Group completely undermines and defeats the proceedings of arbitration.

Amazon, therefore, urged the Court to consider imposing a condition on the Future Group to obey the Tribunal's order.

Responding to Future Group's submissions that the Future Retail will sink with 30000 employees losing their jobs if FRL's deal with Reliance doesn't go through, Mr Subramanium submitted that Amazon has been willing to assist them with the financial problem and has said the same both before the Emergency Arbitrator and the Enforcement Court.

"It is not that only breach of the order will help a company. We have been crying to help. Throughout we have been making an offer, we are ready to help. We said we're interested, why would be not interested in the survival of this entity when we have rights under the agreement", he said.

'Future Retail Will Sink With 30,000 Employees If Reliance Deal Doesn't Get Through' : Future Group Lawyers To Supreme Court In Case Against Amazon

* Special Leave Petitions of both FRL and FCPL challenging Delhi High Court's 29th October order which refused to stay the Singapore Arbitration Tribunal's refusal to vacate the Emergency Award restraining it to continue with Reliance deal.

The Emergency arbitrator through its order dated 25th October 2020 has restricted FRL from going forward with its deal with Reliance and injuncted FRL from taking steps in furtherance of the Scheme (Scheme of Arrangement with Reliance). The Arbitral Tribunal constituted to hear Future-Amazon dispute reinforced the Emergency Arbitrator's order on October 21, 2022 and dismissed FRL's plea to vacate the order of the Emergency Arbitrator.

Appearing on behalf of Amazon, Mr Subramanium submitted that FRL acted in breach of the interim prohibitory order passed by the Emergency Arbitrator and because of that Amazon filed an enforcement application which led to Justice Midha's order. He added that the Supreme Court's order on 6th August 2021 took view that EA is a validly constituted Tribunal for purpose of the Arbitration and Conciliation Act and such orders are capable of effective enforcement under Sec 17(2) of the Act.

Mr Subramanium submitted that as far as directions of imposing penalty like imprisonment are concerned, he had earlier submitted that Amazon is not interested in penalizing the Future group and its promotes and it was only seeking compliance of the directions.

"I'm not interested in punishment but there is something called Rule of law and that is what Justice Nariman said that if it is binding on you, you must obey the order", Mr Subramanium said

Arbitral Tribunal's Award Must Be complied with Until Its Suspended in Proper Appeal:

Mr Subramanium argued that the Arbitral Tribunal pronounced its order on Oct 21, 2021, rejecting FRL's application for vacation of EA's order. The net effect therefore is that until the order of Arbitral Tribunal is suspended in proper appeal under Section 37 of the Arbitration and Conciliation Act that order must be complied with. He added that the only reason the petitioners wanted Justice Midha's order to be vacated was because it said that EA's order is a valid order and has to be complied with.

In response to the Court's suggestion that FRL's appeal against order of the Tribunal may be heard by the High Court, Mr Subramanium submitted that FRL certainly is entitled to an appeal under Sec 37 of the Arbitration Act and Amazon has absolutely no difficulty in the matter but being dealt with.

He added that till the Single Judge decides the matter it is essential that FRL must abide by the Tribunal's order.

Defending Justice Midha's order, Mr Subramanium said Justice Midha's judgement was delivered in a jurisdiction under Section 17(2) of the Act and if the award has to be enforced like a decree or order of a court under Section 17(2), then directions have to be passed to enforce the order. As it was an enforcement petition, if someone has violated the order, an enforcement court is entitled in law to ensure that the order is implemented.

Amazon Always Wanted a Fair Resolution Of the Matter: Mr Subramanium submitted that Amazon has always wanted a resolution of this matter, but resolution must take place in a fair manner, but FRL must obey an order and not file a suit for an anti arbitration injunction.

He added that they are not seeking penal directions against the Future group but they must abide with the order the Emergency Arbitrator which is a valid and a legal order. He therefore suggested that the Court can delete the penal directions in the impugned order while maintaining the effectiveness of the Emergency Arbitrator's order, saying that it has merged in the Arbitral Tribunals order and that is in appeal and the single judge may deal with it.

Senior Advocate Aspi Chinoy appearing for Amazon submitted that the process adopted by the Future Group here is to completely undermine and defeat the proceedings of arbitration.

He added that when the October 2020 order of Emergency Arbitrator was made, FRL appeared before the Emergency Arbitrator and contended that it wasn't a party and therefore no order should be made. However, an injunction order was passed restraining them from taking further steps in the matter.

Mr Chinoy argued that even though the order was otherwise appealable under the Arbitration Act, no appeal was filed by FRL and it continued to disregard and act in breach of that order and proceed with the scheme. FRL filed collateral suits in Delhi High Court saying that they are not parties to the agreement between Amazon and FCPL.

Mr Chinoy submitted that the principle underpinning arbitration is that you can't have recourse to collateral proceedings in civil suits to try and restrain and undermine the arbitration, which is embodied by Section 5 of the Act.

He argued that the High Court's order in FRL's is only to refuse the injunction, the rest were just observations, which surely cannot give them a license that they are not bound by the Emergency Arbitrator's order and can flagrantly disregard the same. He submitted that FRL flagrantly disregarded the Emergency Arbitrator's order and proceeded like the order wasn't there.

Mr Chinoy argued that even after Supreme Court's order delivered by Justice Nariman on 6th August 2021 which vacated the stay on Justice Midha's order and confirmed that the Emergency Arbitrator was well within section 17 of the Arbitration Act, the petitioners still continued to ignore that order and proceeded with the scheme. Then they moved before Tribunal to vacate the order and Emergency Arbitrator's order was confirmed by the Tribunal.

"It is a travesty, the order has never been challenged in appeal, and now they say that since that award was confirmed by Tribunal just wipe out the first order and allow us to continue to violate and validate all our acts", Mr Chinoy said.

"We are dealing with system of law under the arbitration act here. You get an order against you, you don't prefer an appeal, you prefer a collateral proceeding not permitted, you continue to violate and now when order is confirmed you say wipe off all my illegalities", he remarked.

"Here is a party which has persistently violated injunction orders of Tribunal, and on one ground or another till now continues to say that I will not appeal against it, I will not challenge it but I will not act in accordance to it. What is the equity, what is the law which says if the order is confirmed by Tribunal the earlier order goes? They can't violate an order of the Arbitrator and say all that violation is wiped out as order is confirmed" Mr Chinoy said.

Mr Chinoy concluded by saying that this is a case where the petitioners urged their point of not being a party, the order is against them, they have not preferred an appeal when they could have, they continued to violate the order, and the impugned order only seeks to roll back that.

What was the Delhi High Court single bench March 2021 order?

A single-judge bench of Justice JR Midha on March 18, 2021 had directed for attachment of property of Future group companies and their promoters including Kishore Biyani and had also directed them to file additional affidavits indicating the details of their assets and property for violation of the emergency award. Also, the Single Bench had imposed a cost of Rs. 20 lakhs on FRL and its promoters for raising an untenable plea of nullity against the award and the cost was directed to be deposited in PM fund of Covid 19 to be used in vaccination of senior citizens belonging to the below poverty line group. The Court ordered the same to be deposited within 2 weeks and the same shall be put on record within 1 week thereafter.