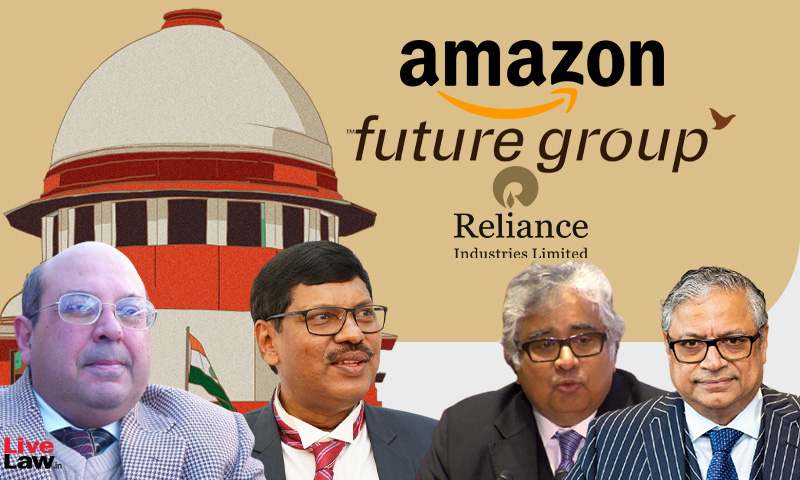 x
"It is wholly incorrect to say that Section 17(1) of the Act would exclude an Emergency Arbitrator's orders", the Court said in the judgment.

The Supreme Court on Friday ruled in favour of e-commerce giant Amazon in its dispute with Future Retail Limited(FRL) over the latter's merger deal with Reliance group. The top court held that that Emergency Award passed by Singapore arbitrator stalling FRL-Reliance deal is enforceable in Indian law. "We have framed 2 questions and answered them. Emergency arbitrator's award...

The Supreme Court on Friday ruled  in favour of e-commerce giant Amazon in its dispute with Future Retail Limited(FRL) over the latter's merger deal with Reliance group. The top court held that that Emergency Award passed by Singapore arbitrator stalling FRL-Reliance deal is enforceable in Indian law.

"We have framed 2 questions and answered them. Emergency arbitrator's award holds good under Section 17(1) of the Arbitration and Conciliation Act and single Judge's order for such award cannot be appealed under Section 37(2)". Justice Nariman read out the operative portion of the judgment in the court today morning at 10.30 AM.

"It is wholly incorrect to say that Section 17(1) of the Act would exclude an Emergency Arbitrator's orders", the Court said in the judgment.

"We declare that full party autonomy is given by the Arbitration Act to have a dispute decided in accordance with institutional rules which can include Emergency Arbitrators delivering interim orders, described as "awards". Such orders are an important step in aid of decongesting the civil courts and affording expeditious interim relief to the parties. Such orders are referable to and are made under Section 17(1) of the Arbitration Act", the Court stated in paragraph 41 of the judgment.

This means that the Supreme Court has approved the enforcement of the the Singapore Emergency Arbitrator (EA) award, passed at the instance of Amazon, restraining the Rs 24,731 crore amalgamation deal between Future Retail and Reliance Industries Group(Mukesh Dirubhai Ambani Group).

Also, the top court has upheld the order of the single bench of the Delhi High Court which had ruled in favour of the enforcement of the Emergency Award and has held that  single judge's order was not appealable to the division bench of the High Court under Section 37(2) of the Arbitration Act.

A bench comprising Justices RF Nariman and BR Gavai had reserved judgment on July 29 after extensively hearing the arguments led by Senior Advocates Gopal Subramanium for Amazon and Harish Salve for FRL(Case Title : Amazon.Com NV Investment Holdings vs Future Retail Ltd and others) .

Amazon had moved the Supreme Court challenging an order dated March 22 passed by a Division Bench of the Delhi High Court staying a single-judge order which had directed upheld the Emergency Award passed by a Singapore Tribunal halting the Reliance-Future deal.

How the Supreme Court decided?

Two issues were decided in the appeal :

(1) whether an "award" delivered by an Emergency Arbitrator under the Arbitration Rules of the Singapore International Arbitration Centre ["SIAC Rules"] can be said to be an order under Section 17(1) of the Arbitration Act; and

(2) whether an order passed under Section 17(2) of the Arbitration Act in enforcement of 1 the award of an Emergency Arbitrator by a learned Single Judge of the High Court is appealable.

The judgment authored by Justice Nariman noted that the Arbitration Act has no express or implied bar against Emergency Arbitration.

Sections 2(8) and 19(2) give "party autonomy"  to agree on the procedure to be followed by an arbitral tribunal in conducting its proceedings. In the instant case, the parties had agreed to follow the Singapore International Arbitration Centre(SIAC) Rules.  Under the SIAC Rules, the date of receipt of the complete Notice of Arbitration by the Registrar of SIAC shall be deemed to be the date of commencement of the arbitration

"This being the case, when Section 17(1) uses the expression "during the arbitral proceedings", the said expression would be elastic enough, when read with the provisions of Section 21 of the Act, to include emergency arbitration proceedings, which only commence after receipt of notice of arbitration by the Registrar under Rule 3.3 of the SIAC Rules as aforesaid", the Court said.

Senior Advocate Salve had stressed that Section 2(1)(d) only speaks of an arbitral tribunal that is constituted between the parties and argued that only such a tribunal can give interim relief. However, the Court pointed out that the definition clause in Section 2(d) is qualified with the expression "unless the context otherwise requires".

"Given that the definition of "arbitration" in Section 2(1)(a) means any arbitration,  whether or not administered by a permanent arbitral institution, when read with Sections 2(6) and 2(8), would make it clear that even interim orders that are passed by Emergency Arbitrators under the rules of a permanent arbitral institution would, on a proper reading of Section 17(1), be included within its ambit. It is significant to note that the words "arbitral proceedings" are not limited by any definition and thus encompass proceedings before an Emergency Arbitrator, as has been held hereinabove with reference to Section 21 of the Act read with the SIAC Rules:"

The Court held that at least as far as Section 17(1) is concerned, the "arbitral tribunal" would, when institutional rules apply, include an Emergency Arbitrator.

The parties pointed out that the Law Commission of India, in its 246th report, suggested amendment to give recognition to Emergency Arbitration. However, such recommendation is yet to be accepted.

That will not however stop the Court from interpreting that such recommendation forms part of the statute, the Supreme Court said, referring to the precedent in Avitel Post Studioz Ltd. & Ors. v. HSBC PI Holdings (Mauritius) Ltd.

"...the mere fact that a  recommendation of a Law Commission Report is not followed by Parliament, would not necessarily lead to the conclusion that what has been suggested by the Law Commission cannot form part of the statute as properly interpreted", the Court said.

In paragraph 35 of the judgment, the Court clearly affirmed its view regarding Emergency Arbitration Award :

"An Emergency Arbitrator's "award", i.e., order, would undoubtedly be an order which furthers these very objectives, i.e., to decongest the court system and to give the parties urgent interim relief in cases which deserve such relief. Given the fact that party autonomy is respected by the Act and that there is otherwise no interdict against an Emergency Arbitrator being appointed, as has been held by us hereinabove, it is clear that an Emergency Arbitrator's order, which is exactly like an order of an arbitral tribunal once properly constituted, in that parties have to be heard and reasons are to be given, would fall within the institutional rules to which the parties have agreed, and would consequently be covered by Section 17(1), when read with the other provisions of the Act, as delineated above".

"A party cannot be heard to say, after it participates in an Emergency Award proceeding, having agreed to institutional rules made in that regard, that thereafter it will not be bound by an Emergency Arbitrator's ruling. As we have seen hereinabove, having agreed to paragraph 12 of Schedule 1 to the SIAC Rules, it cannot lie in the mouth of a party to ignore an Emergency Arbitrator's award by stating that it is a nullity when such party expressly agrees to the binding nature of such award from the date it is made and further undertakes to carry out the said interim order immediately and without delay"

Party autonomy one of the pillars of arbitration

The Court underscored that party autonomy is one of the pillars of arbitration and they are free to agree upon the procedure which should govern them in arbitration proceedings.

"Full party autonomy is given by the Arbitration Act to have a dispute decided in accordance with institutional rules which can include Emergency Arbitrators delivering interim orders, described as "awards". Such orders are an important step in aid of decongesting the civil courts and affording expeditious interim relief to the parties. Such orders are referable to and are made under Section 17(1) of the Arbitration Act"

Enforcement proceedings are not covered by appeal provisions

Underscoring that Section 37 is a "complete code" in itself, the judgment clarified that enforcement orders do not fall within its scope.

The judgment stated as follows :

"The second question posed is thus answered declaring that no appeal lies under Section 37 of the Arbitration Act against an order of enforcement of an Emergency Arbitrator's order made under Section 17(2) of the Act".

On March 18, a single bench of Justice JR Midha of the Delhi High Court had allowed the petition filed by Amazon under Section 17(2) of the Arbitration and Conciliation Act, 1996 read with Order XXXIX Rule 2A  and Section 151 of Code of Civil Procedure for enforcement of the interim order dated 25th October, 2020 passed by the Emergency Arbitrator. The single bench held that 'Emergency Award' is enforceable under Indian law as an order for interim measure passed under Section 17(1) of the Arbitration Act. The single bench also applied the 'group of companies' to hold that FRL and the Biyanis are bound by the Singapore award.

The single bench also took exception to FRL raising the argument of "nullity" against the emergency award and held it to be a vague ground. So, a cost of Rs 20 lakhs was imposed on Future Retail, which was to be deposited with the PM CARES Funds, and its directors, including Kishore Biyani,  were cautioned of coercive action if the costs were not deposited within the stipulated time.

The case has witnessed many back and forth action across the Delhi High Court and the Supreme Court.

On February 2, a single bench of Justice JR Midha had passed an interim order of status quo on the FRL-Reliance merger, while making a prima facie observation in favour of Amazon's case. This status quo order came to be stayed by the division bench on February 8. Amazon moved the Supreme Court against this stay order. On February 22, a bench headed by Justice RF Nariman of Supreme Court had barred the NCLT from sanctioning scheme of merger of Reliance-Future companies, while allowing the continuation of the proceedings before the Tribunal.

Later, on March 18, the single bench of the High Court passed the final order in Amazon's plea, setting off the present proceedings.

Significantly, as per the latest judgment, the Supreme Court has set aside both the interim orders passed by the Division Bench of the Delhi High Court on February 8 and  March 22.

Reports of the hearings in the Supreme Court :

If Amazon Wins, It Will Get Rs 1400 Crores, But 26,000 Employees Of Future Retail Might Lose Jobs : Salve In Supreme Court

Biyanis Induced Amazon Into Deal With Future Retail; They Are Bound By Arbitration : Amazon In Supreme Court