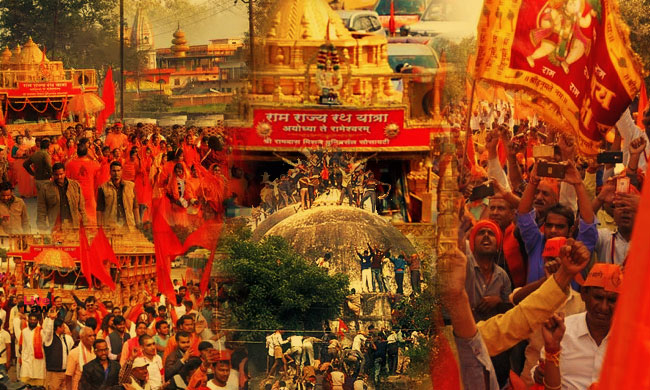 On day 25 of the Ayodhya-Babri land dispute hearing, senior advocate, Dr. Rajeev Dhavan resumed his argument about the Janmasthan not being a juridical person. With the example of Janmashtami, Dhavan stressed that Lord Krishna's birthday is celebrated but it isn't a juridical person. However Justice Bobde shot down the example saying that was pertaining to time, not place. Justice DY...

On day 25 of the Ayodhya-Babri land dispute hearing, senior advocate, Dr. Rajeev Dhavan resumed his argument about the Janmasthan not being a juridical person. With the example of Janmashtami, Dhavan stressed that Lord Krishna's birthday is celebrated but it isn't a juridical person. However Justice Bobde shot down the example saying that was pertaining to time, not place.

Justice DY Chandrachud thought aloud that a line was to be drawn regarding recognising something as a juridical person. There are several events in a deity's life which occur at various places; would all such places be considered a juridical person, or perhaps is a physical manifestation required, wondered Justice Chandrachud. Dhavan submitted that there needed to be some tangible manifestation, wherein a continuity of belief must be shown. While no one disputed Lord Ram was born somewhere in Ayodhya, there was no text that had been provided to show the exact place in Ayodhya where Ram was born, argued Dhavan.

Moving on to the statement made by Shia Waqf Board that they were ready to forgo their claim in favour of Hindus, Dhavan argued that "they've completely changed their position. Now they say this is our land, take it".

Referring to the Shia position that Hindus could take what they consider their land and build a temple, it was submitted that the All India Shia conference had given a statement before the Allahabad HC where they said there was no conclusive evidence to show that Lord Ram was born where the mosque stood, that Babri masjid was vested in Allah and that whenever the land is released, it must go to Muslims. Highlighting the discrepancies between the statements, various accounts of Shia witnesses were read out by the senior advocate. According to one of them, there exist at least 3 spots in Ayodhya which are claimed to be the exact spots where Lord Ram was born. Clearing the stand of the Sunni Waqf Board, it was submitted by Dhavan that the Babri Masjid is the property of the waqf, and that the Sunni Waqf Board has rights over it. Only after 1885 did the outer courtyard of Ram Chabutra, outside Babri masjid, come to be known as the Janmasthan. So if it is shown that the birthplace of Lord Ram is the exact place where the mosque is, Sunni waqf board would shift the mosque.

Countering exhibits shown by Hindu parties, Rajeev Dhavan placed some photos from 1950 of the demolished Babri Mosque and stated they proved nothing about there being a temple there. On the 14 kasauti pillars discovered at the site, he submitted that there's no picture of any Hindu god on them and that it was not known where they came from. Decorations on the pillars, which included lotuses and other things, could not be proof of Hindu signs.

Justice Bobde however sought evidence to show whether such images were found in mosques. Dhavan responded by saying that the question to be asked is what these pillars were. Dhavan said :

"The point is there is no direct evidence of any image of a god there. The question is what are these pillars. They must show where these pillars came from and who brought them... Just because there are images of lotuses and some figurines, they can't say mosque is out...Their argument is that there could not be a mosque there, which is a separate argument from whether there was a mosque and it was built on relics of a Hindu temple. The purpose of showing those pictures is to say the mosque was not a mosque...So if there's a cross near a temple in Kerala, will you say the temple isn't a temple?"

After lunch, the senior advocate sought a day off on Friday. While CJI Ranjan Gogoi seemed agreeable to allow it as he had done last Friday, he expressed concern regarding the lack of time and asked whether someone else could argue. "I don't want to break my argument, have someone else arguing, since we have a certain flow... I'm conscious of the speed we're going at... We want a judgment in this case", responded Dhavan. The CJI then asked all concerned counsels to chalk out a tentative timeline on when all arguments could be concluded, and submit it to the bench, after which a call would be taken.

Dhavan resumed his arguments where he took the bench through some exhibits submitted by Hindu parties, and said they were not conclusive. He reiterated his submission that no pictures of Hindu gods or goddesses were e seen on the pillars, and generic/decorative pictures cannot be shown to claim that this is proof of a Hindu temple or that it cannot have anything to do with a mosque.

The day's hearing concluded with Dhavan urging the bench to look into a report submitted by 4 historians. He said that the High Court had not considered it because one of the historians, D N Jha, had not signed the report. Their conclusion was that the mosque was not at the site where Lord Ram was born, and that there was no evidence to conclude that the mosque was erected on the ruins of a temple. Upon being questioned by Justice Bobde as to whose instructions the report was made on, it was informed that they had volunteered the report.